Before I moved to Italy, I had never bought a mattress.  My mom chose and bought me one before I moved away for university and either I liked the same type of mattress she did or my young back did not care as much. I could sleep just about anywhere.  How I wish that were still true!  On my own in Italy the apartment I rented was furnished and the mattress was a bit soft but Mauro came to my rescue with a piece of plywood, I couldn’t afford anything else and I could still sleep just about anywhere. In moving back to the US for nine months while contemplating the idea of marrying Mauro, I went back to my old bed. Buona notte! I had left it at my best friend Jessica’s house and she was happy to have me back home again.  We started living together in college and remained roommates until I moved to Italy in 1997.   She is still one of the best people in my life!

I officially moved back to Italy again in May of 1999.  Mauro picked me up at the airport but I had never really thought about where we would be living until then.  I hadn’t kept my apartment and Mauro, typical of an unwed Italian child, lived at home with his parents. Why leave paradise?  The fact that he still lived at home (I had moved out of my mom’s home ten years earlier) dawned on me as we drove into the driveway.  I was going to be living with my future in-laws…at least temporarily. OMG!

One of the first things Mauro’s mom, Maria, did when I arrived, was apologize for not having a proper bed for us.  She had set up a makeshift bed on the floor of the empty apartment next door to them.  Since Mauro’s bedroom was right next door to his parents, I breathed a huge sigh of relief. She also apologized for not having been able to get an appointment with the mattress maker until the next afternoon.  Mattress maker?  I was in for an education.

Upon waking the next morning, I went to work undoing the stitching on two old mattresses.  One had belonged to Mauro’s sister before she was married and moved out and the other had been from Mauro’s parent’s first bed.   Stuffed with wool, we took it out and laid it out on sheets in the sun.  When it was time for our appointment, we bundled it up and off we went to the Casa del Materasso (House of Mattresses).  I was expecting a warehouse, but this was truly a house.  The family lived and worked there. 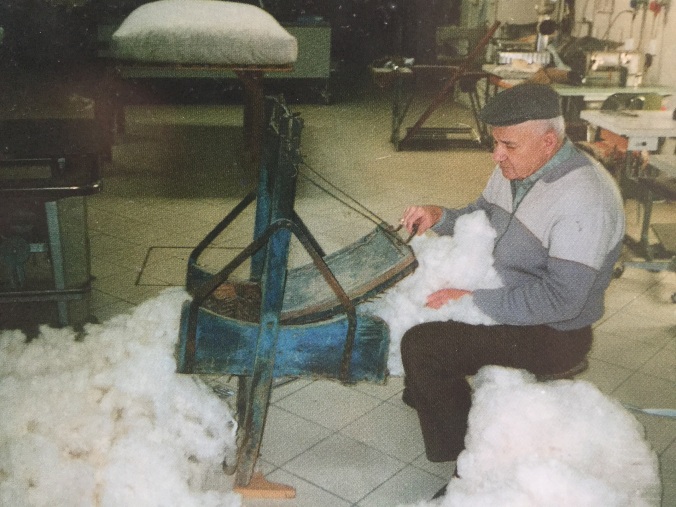 When we arrived the first thing they did was weigh the wool…50 Kg. (110 lbs.) We wanted the equivalent of a king sized bed, which do not exist in Italy so we would need another 5 Kg. of wool.  Next up was choosing the fabric and they had about 20 prints to choose from. Have you ever wondered why mattresses need to be pretty?  They are always covered. Nevertheless, we chose a light blue fabric with pink flowers.  Third on the checklist was deciding on the firmness and they had sample beds for us to lay on.  Mauro, having had back surgery years before I knew him, wanted a firm, orthopedic mattress.  Va bene…that’s fine…I was sure it would be comfortable.  You cannot really tell from laying on a mattress for a few minutes in a store, can you? 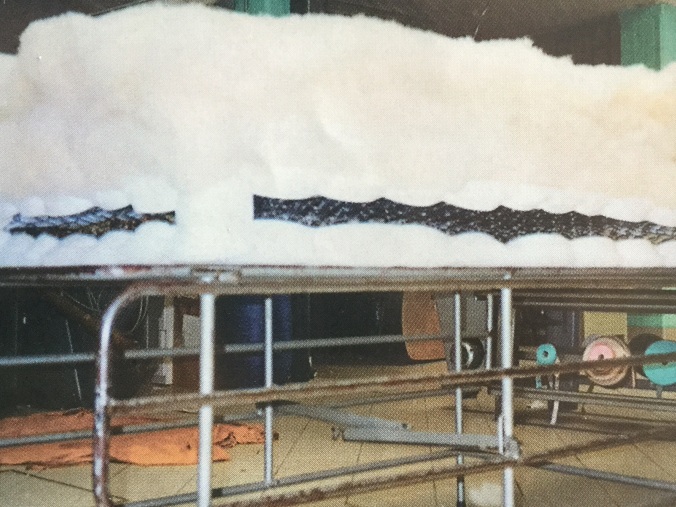 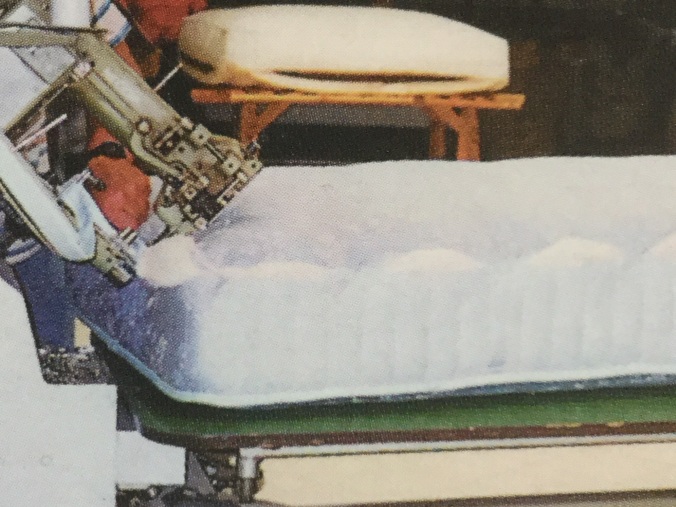 My future mother-in-law,  Maria, suggested we have two smaller mattresses made and this is where I went astray by not taking her advice. I was sure they would come apart in the middle and insisted on just one.

Last on the list of things to choose was the rete a doghe, or base.  We would have to have one custom made since our bed was larger than the normal matrimoniale. No box frames here. The frame would take about 6 weeks to arrive but we could borrow a smaller one in the interim.  Our mattress would be ready in a day and would be delivered the next afternoon. Wow, I couldn’t wait! 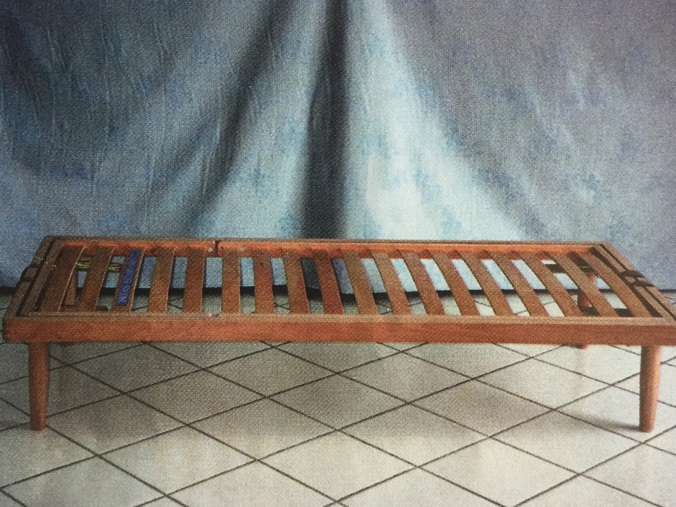 As promised, they delivered our bed the next day.  121 lbs. of wool, steel coils and a 20-year warranty.  Ready to make up our new bed, I realized we had a glitch…bedding!

Mauro came with a hope chest that was (and still is) full of sheets.  Beautifully embroidered, high thread count… all queen sized…too small.   Maria came to the rescue! She stitched side panels on a few of our sheets so we could tuck them in under the bed…problem solved!

The second problem was the weight and the reason Maria had suggested two mattresses. With 121 lbs. of wool and steel coils, the bed weighs in at least 200 lbs.  Turning a mattress is already awkward and this one is a brick too, ugh! My idea that two mattresses might have separated in the middle while we were sleeping… absurd! Live and learn!

The last problem with the bed took longer to emerge.  After about two months of sleeping in this bed, I was waking up with a backache every morning.  I finally understood the importance of a comfortable mattress and while this was a beautifully made, it was not good for me but Mauro loved it.  Funds were tight as we were putting together a new home and I was determined to live with it.  I would adjust, right?

Wrong!  After a couple more months, I went back to the mattress makers in desperation.  I needed to sleep!  This was a time before memory foam and easily found feather bed covers so what could I do?  They would make me a foam topper covered with wool for my side of the bed. Great!

Forget about the idea of mattresses coming apart…I was now like the Princess and the Pea, sleeping above Mauro.  I have to say this actually worked to my advantage while nursing our babies.  Mauro would get up for the middle of the night diaper changes and then I would nurse.  I would manage to stay awake long enough to nurse on the outside edge and then switch to the other breast and fall asleep. Happy sleepy babies would then roll closer to Mauro leaving me on my slightly higher perch for some much-needed rest.

My princess gig worked well enough for a while but it was not a good long-term solution.  I was ticking off the years until we could justify making new mattresses but sleep deprivation won out in the end and once again I went back to the Casa del Materasso to explore my options.

We could reuse our wool and have two new beds made but my bed would still be a bit too firm for me.  There are other materials used to make mattresses but then all that wool goes to waste.  It was here I learned that ASL, the Italian health administration, certifies the wool used for beds and pillows. We could use our wool again but we couldn’t sell it or even give it back for reuse.  Too bad! The mattress makers told me that wool can be used for 200 years.  Our mattresses can still be recycled many times over and I since I don’t love the throwaway mentality that persists in our society these days I really like this concept. Mind you, not all beds in Italy are made this way.  Most Italians will go to a furniture store or Ikea and buy a mattress there but I have made a point of looking for artisan mattress-makers everywhere I go on tour and they are still easy enough to find.

In the end, we decided to keep our bed but with a modern addition.  For Christmas of 2014 Mauro gave me the gift of memory foam.  Its case was custom made for our bed and it will actually extend the life of the mattress.  I have stopped counting down the years on our warranty and when it is time, we will have two new mattresses made. 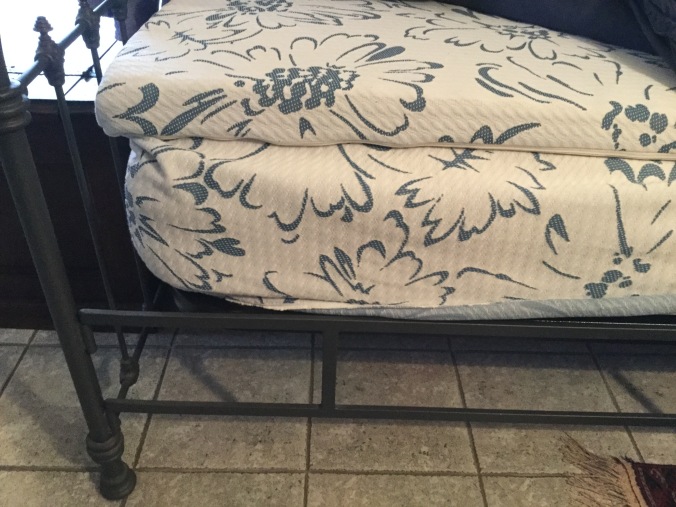 I wonder if Maria is laughing in her grave?  Her advice was good even if I wasn’t smart enough to listen…Buona notte!