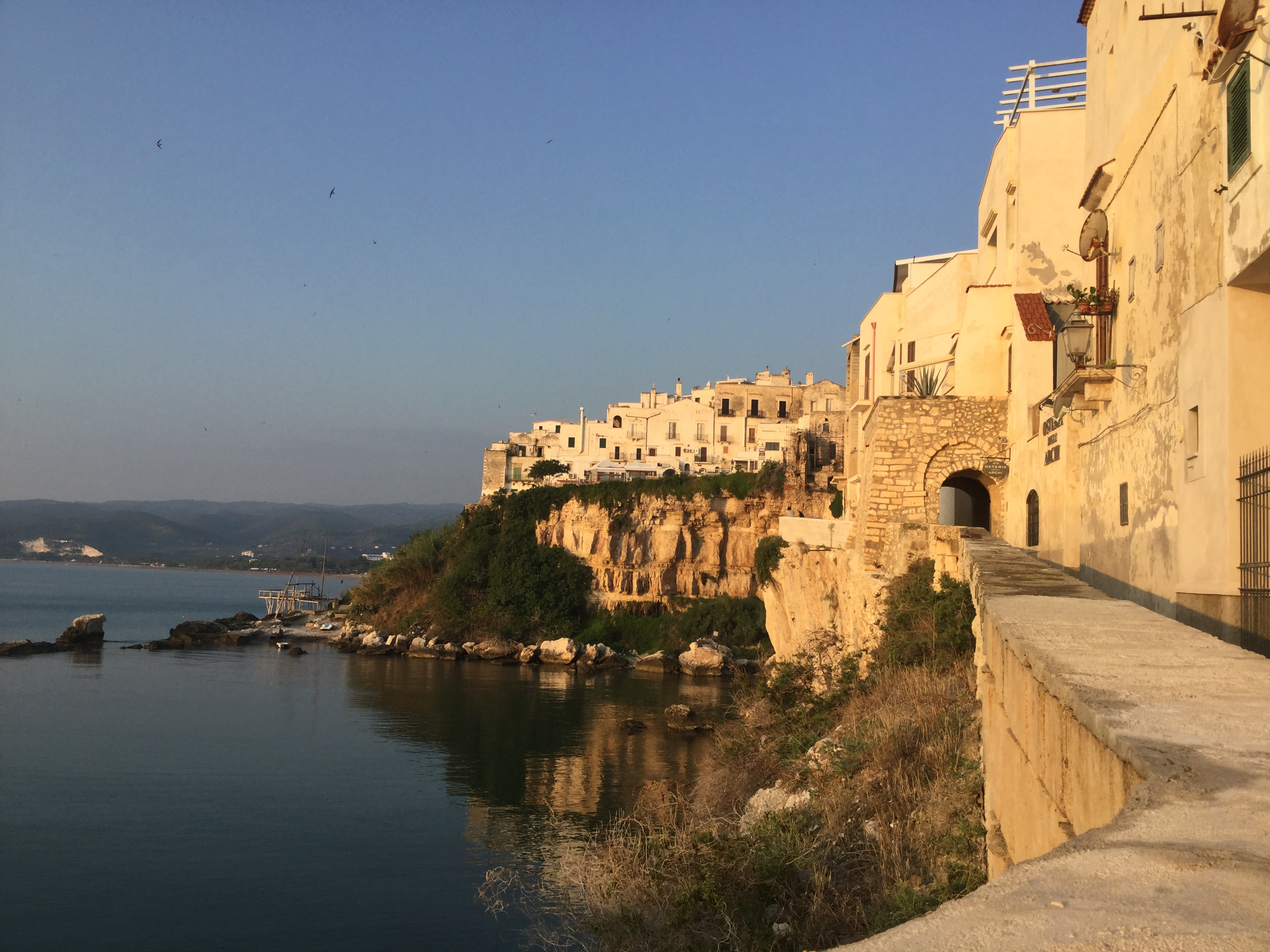 This is not Piemonte..I am on the road as our fall tour season kicks into full swing.   The heat of summer is starting to subside and happily for me, many North Americans head to Italy for a holiday.  I have been leading tours for Rick Steves Europe for nearly 18 years now and still find it to be the most interesting and stimulating job I never imagined for myself.  Rick’s tours attract people from a variety of backgrounds with a desire to not just see the the usual sites but to delve into the culture and sometimes travel off the well beaten path. We are in one such place today, Vieste, on the Gargano Peninsula.
It is not correct to say that Vieste is not a tourist town.  It absolutely is, but the majority of the tourists here are Italian.  There are a few Germans and Belgians too, but mostly Italians, and in September, mostly retired Italians.  Beaches that were overrun just two weeks ago have turned back into relatively peaceful places to pass the day under the late summer sun. 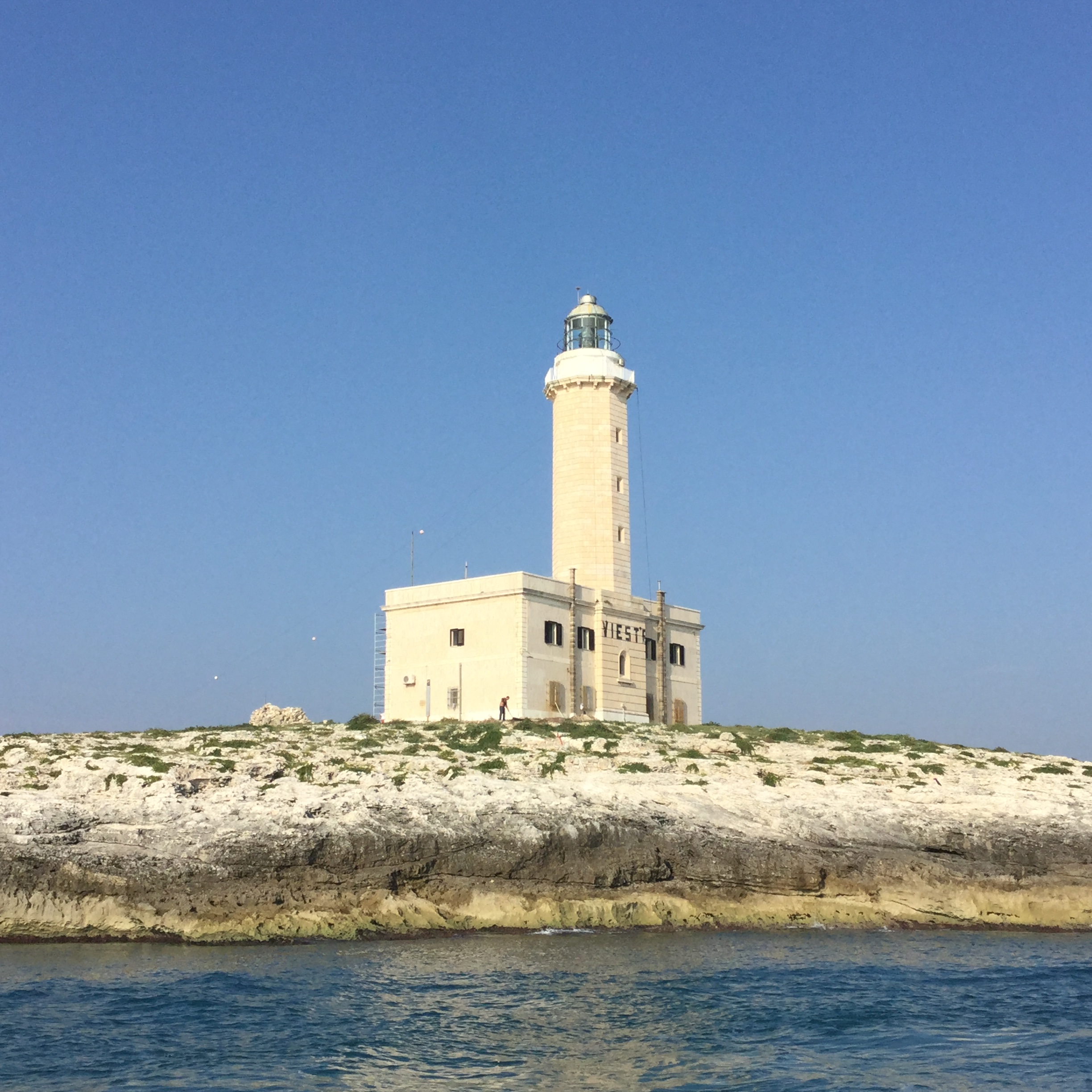 One of the best ways to pass at least part of the day in Vieste is with a boat ride down the coast which is what we do with all of our groups, weather permitting.  Today the weather is perfect!  We embark at 9.00am for our morning tour.  The sea is calm after a few very wet, stormy days and we cruise out past the lighthouse of San Eufemia built in 1867, heading south along the rugged coastline. It is one of the farthest reaching lighthouses in Italy, it’s light visible up 25 nautical miles away. 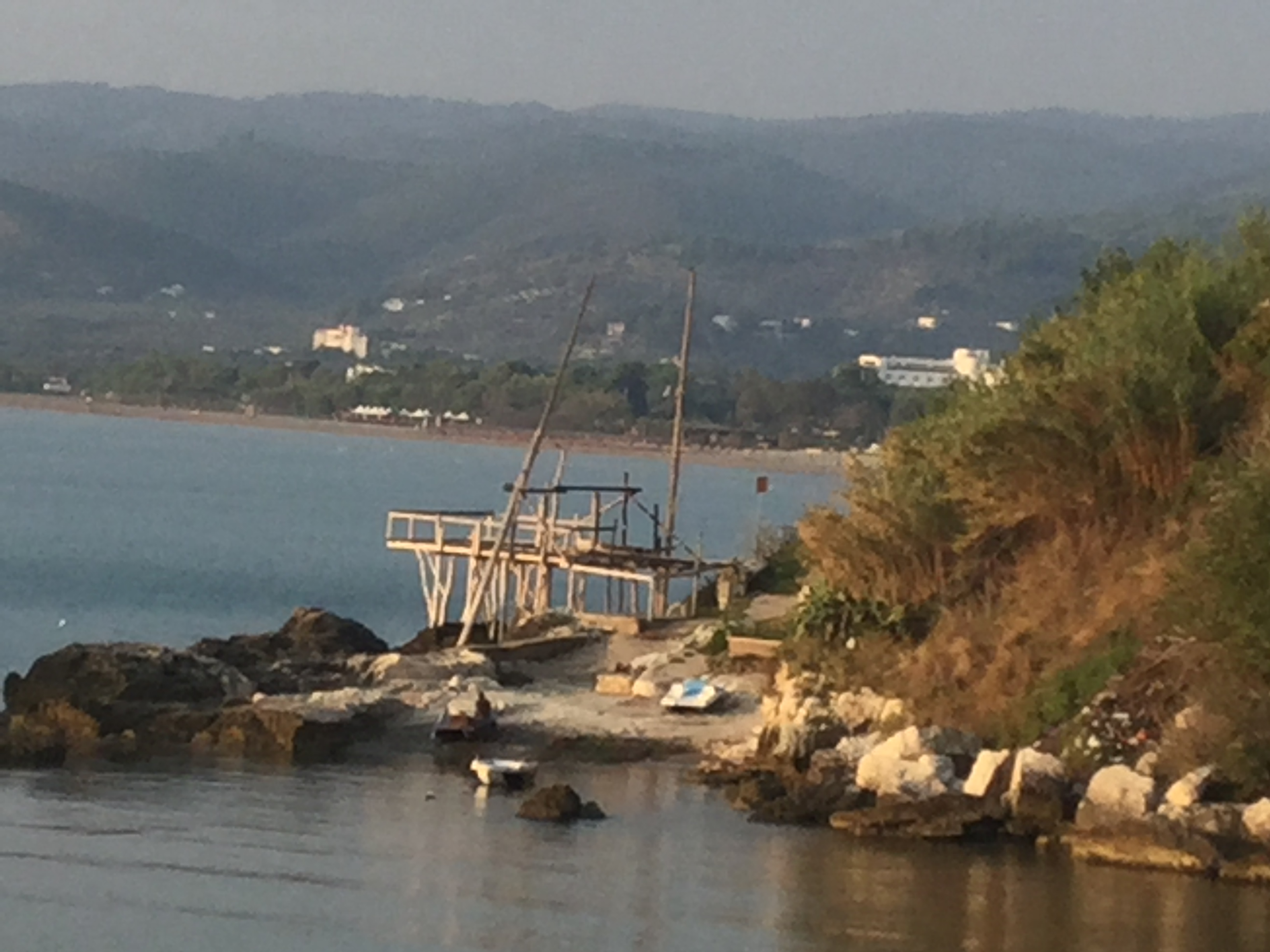 This Trabucco could support four families.

One of the first things we see along the shoreline under the walls of Vieste is a Trabuccho.  These fishing platforms used to dot the coastline in the regions of Abruzzo, Molise, and the Gargano Peninsula in Puglia.  The Trabucchi (pl.) along the Adriatic in the Gargano could support four families and were a way for fishermen to fish even if the weather wasn’t perfect.  You can read more about Trabucchi here.
Moving down the coast we cruise along the rugged coastline that makes the Gargano so spectacular. Limestone in various formations, sometimes striped, sometimes folded, with veins of flint running through it, brownish-amber strips breaking up the white. A purple hued stone at the tideline is dotted with anemones that look like tomatoes. Littered with grottoes some are large enough to sail into and we do. Others are left to those  who can moor outside the entrance and swim in.  A kayak would work as well but kayaks are something I rarely see in Italy. 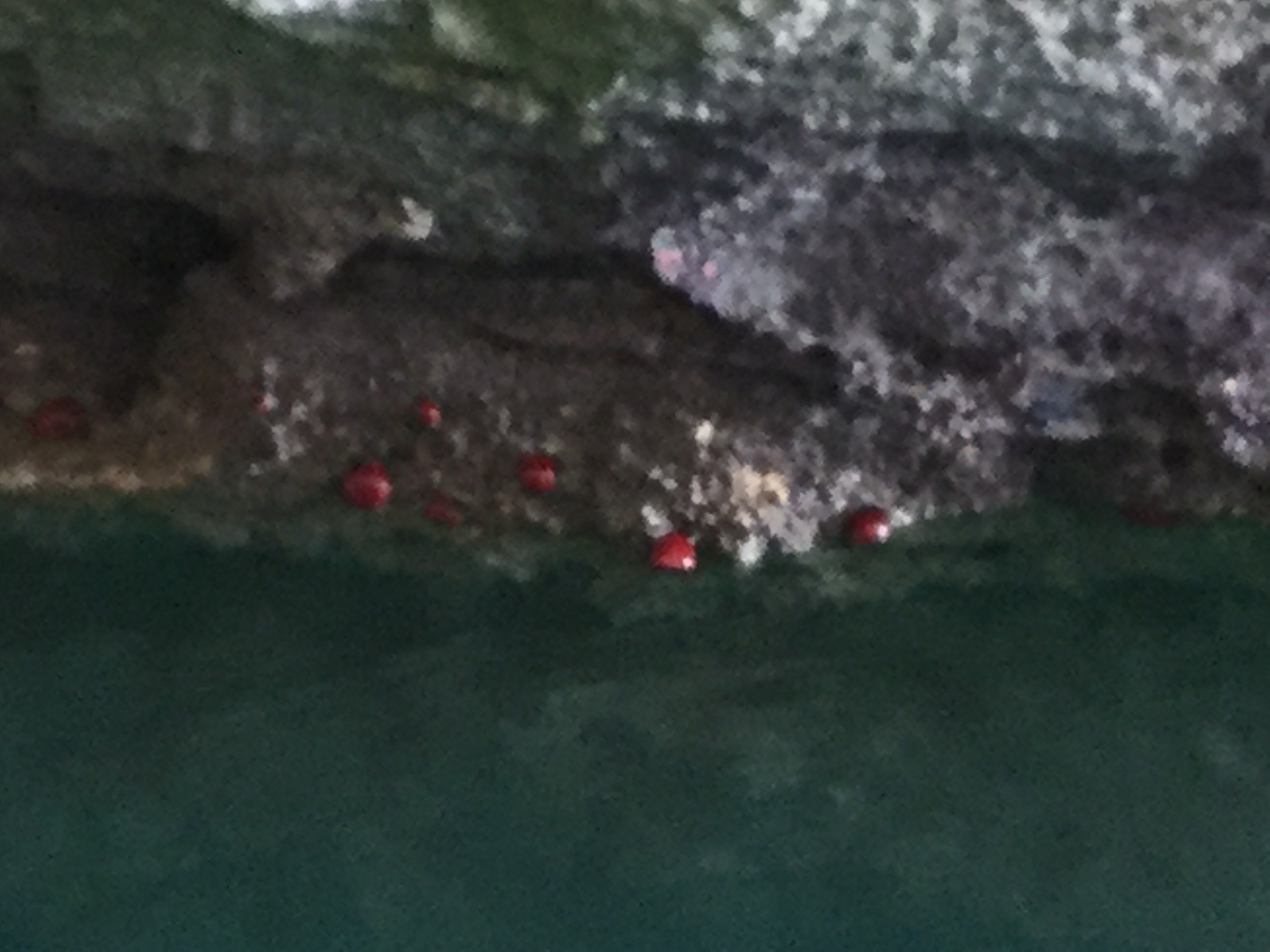 Our boat is captained by Antonio and this year his nephew is working for him.  As we sailed down the coast he waved and exchanged words with a handful of locals who were out fishing for octopus.  He knows everyone and they are all quite friendly.  Many of them are retired and fish for fun but once they have enough for themselves, if the fishing is good they will sell to the local restaurants. 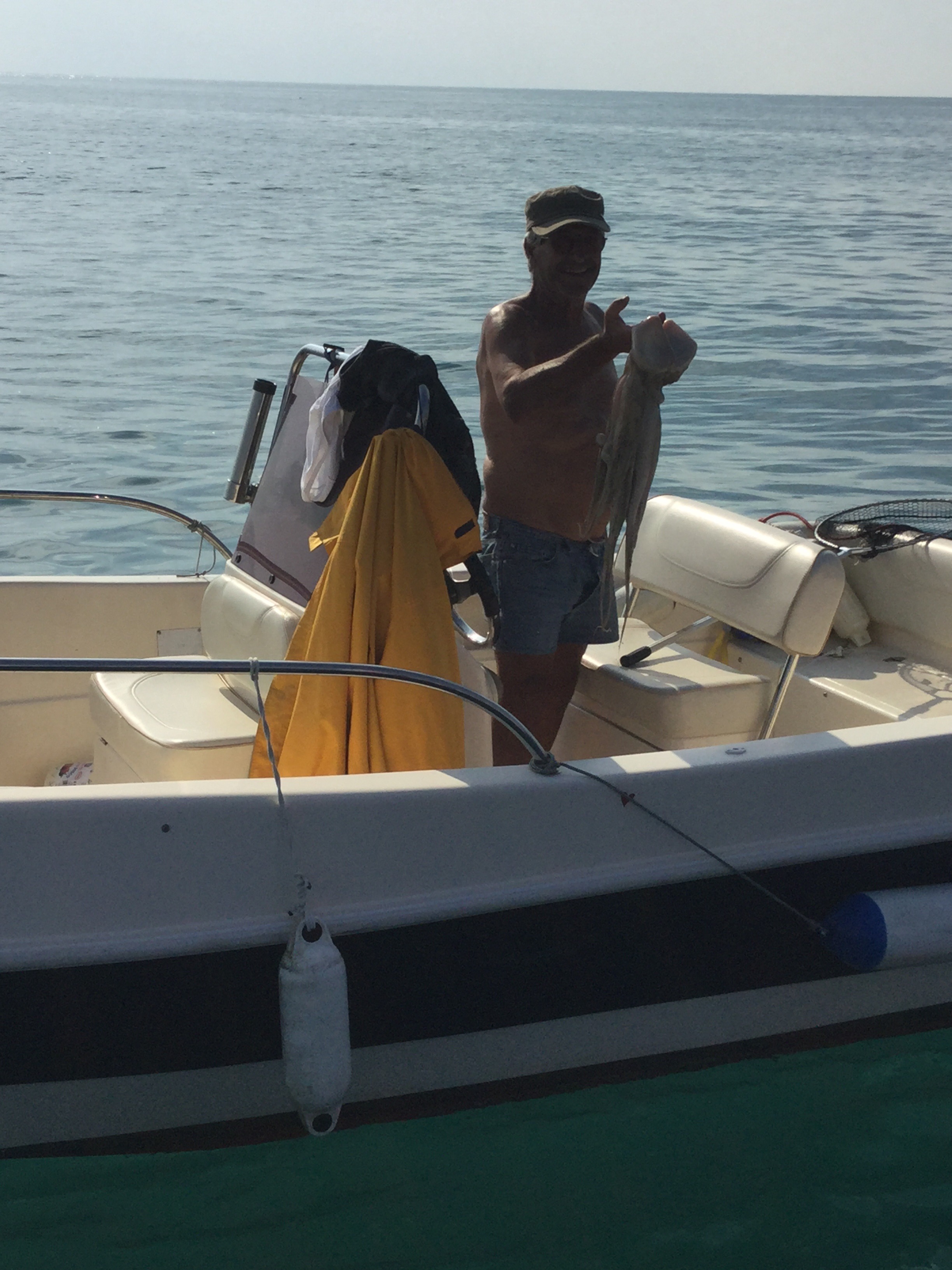 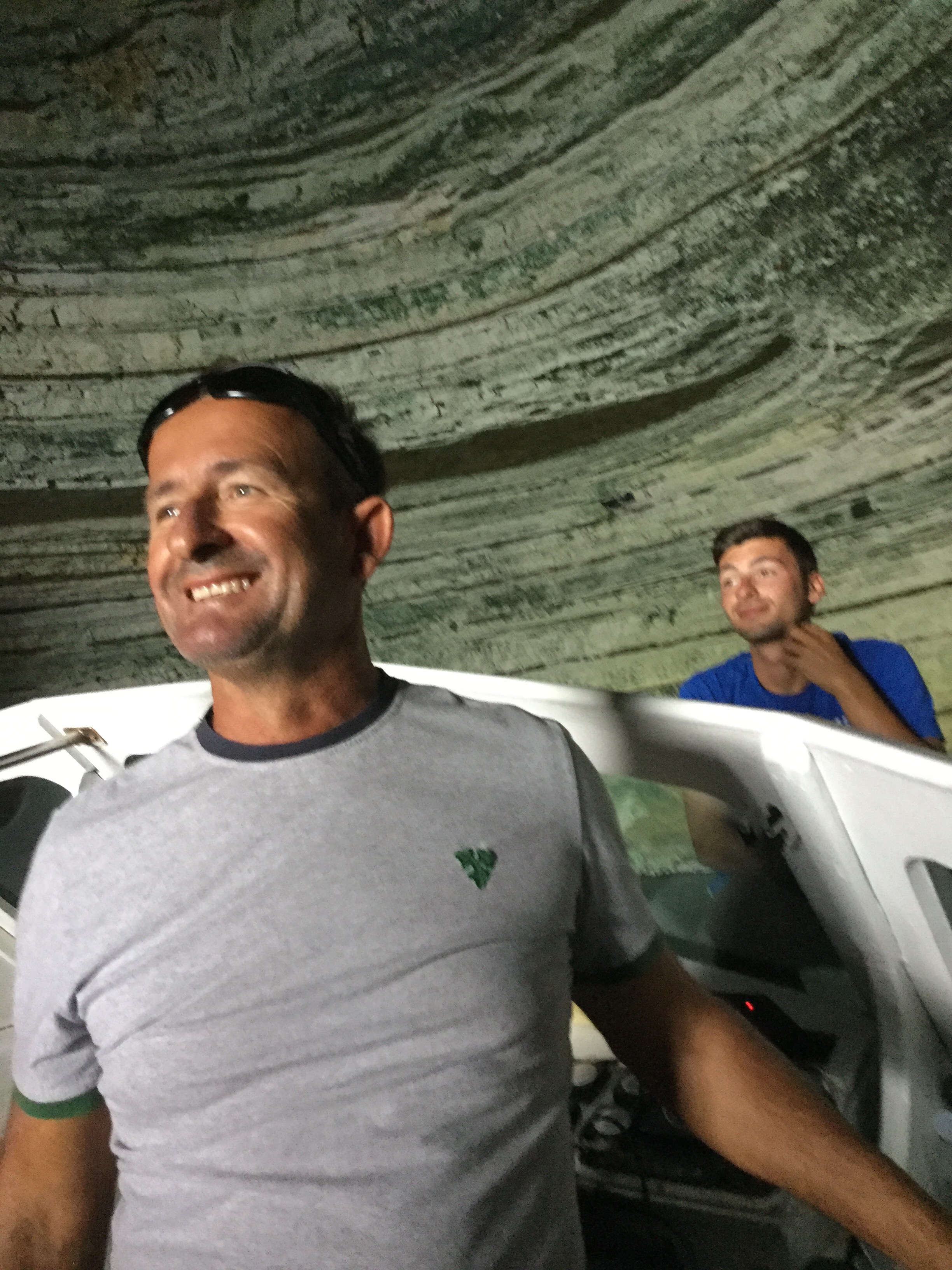 Antonio and his nephew

After about and hour and a half of cruising, going in and out of  a handful of caves it’s time for a break so we land on a beach near one of the many resorts that dot the shore. A long narrow beach covered with water smoothed stones under a limestone cliff is the perfect place for a swim in pristine waters of the Gargano.  As a girl from the Pacific NW, I find the water to be warm but some of my tour members from Florida find it cold.  I guess it’s all relative! 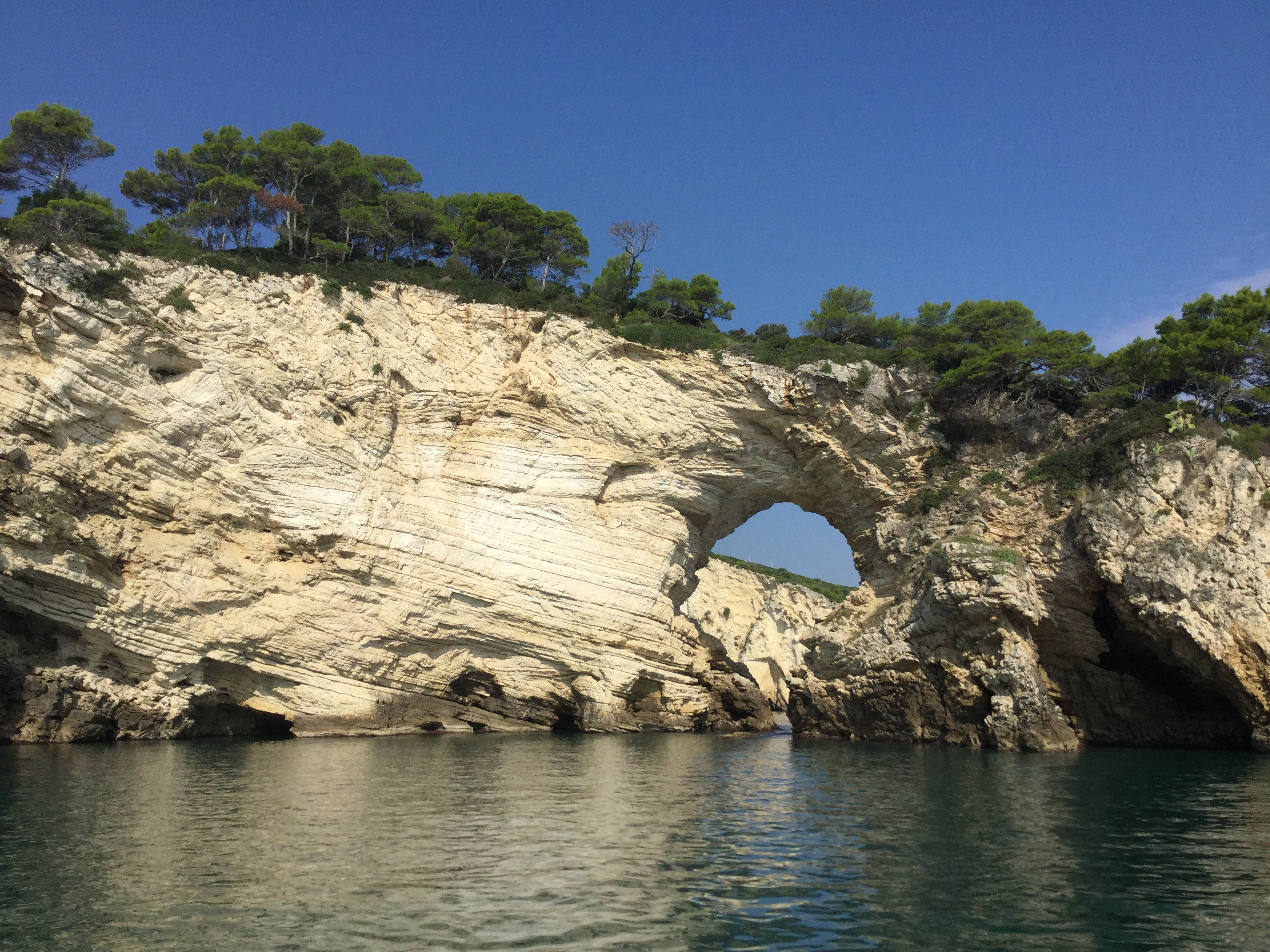 After a swim and a drink it’s time to head back into town and the trip back is much faster. Not giving as much attention to the shoreline I do a little people watching. Our boats passengers include a few Germans, my small group of 16 Americans, and about 45 Italians including a boisterous group from Naples.  One of them wearing a lime green speedo, has wrapped a scarf around his head in a loose turban and has been singing Siamo I Campione del Mondo, enough that it’s stuck in my head.  As we pull into the harbor we say goodbye to to our fellow passengers and crew.
We are all smiling..next time you should come too!

2 thoughts on “Vieste…cruising down the Gargano Peninsula ”