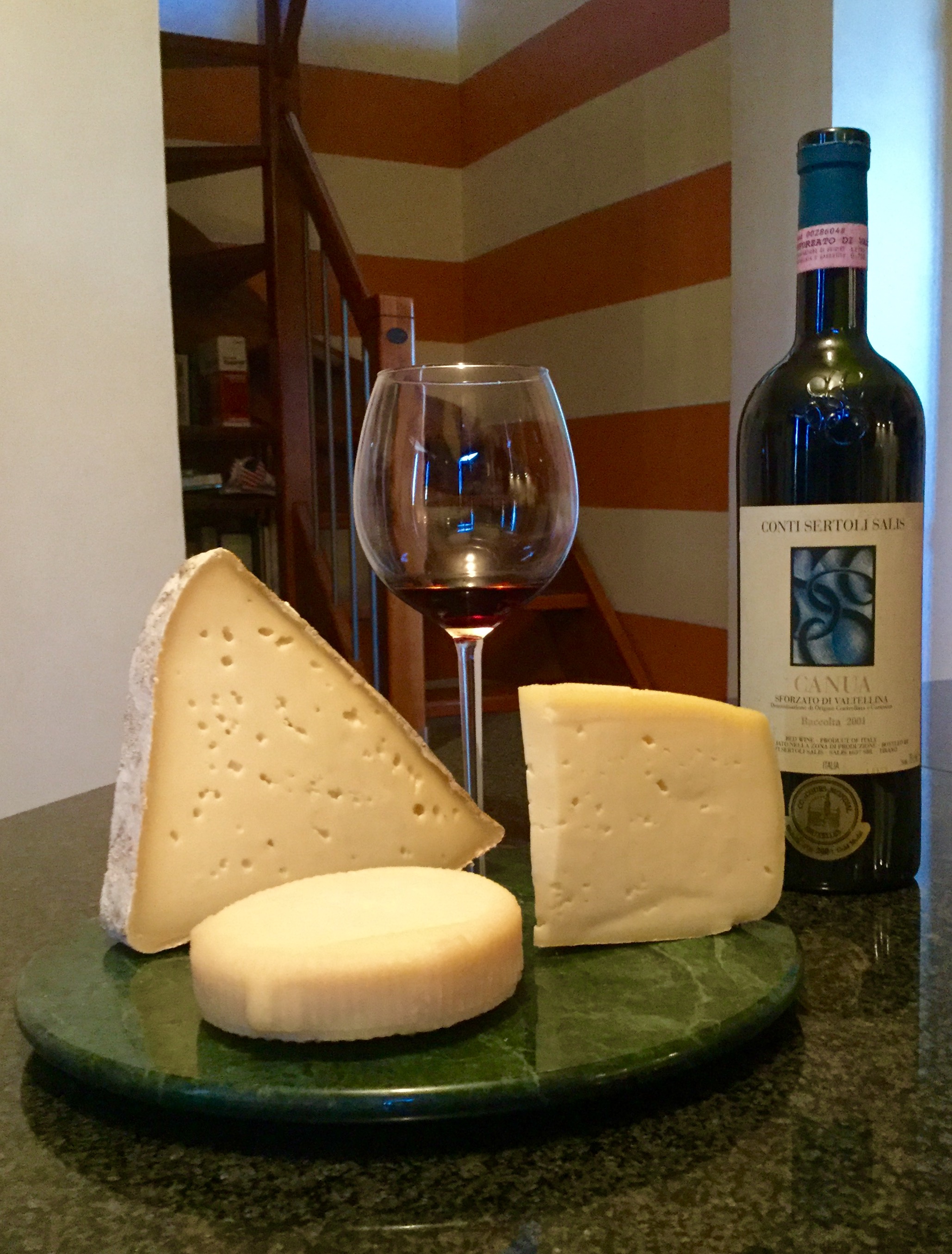 Heaven on a plate and in a glass…

I am a mouse and love cheese! All the cheese you see above is from Valle Josina: the triangular cheese has no name, the small round cheese in the foreground is a goats milk Toma and the wedge is a sheeps milk Toma.  Not pictured but also eaten was a fresh Toma,  milky and light, similar to ricotta cheese and a well aged Buffalo Milk Blu by Moris.
I love to cook but at the same time I find day-to-day meal preparation a bit tedious, especially when it is hot outside and I have other things I either want, or need to do. One of my favorite meals on a day like this is fresh green salad made with arugula and escarole,  juicy tomatoes from our garden dressed with salt, extra virgin olive and balsamic vinegar. and a nice plate of cheese.  Don’t forget the wine! We would normally drink our local Dolcetto, our simple, everyday wine in Piemonte but sometimes even a simple meal like this is a celebration. 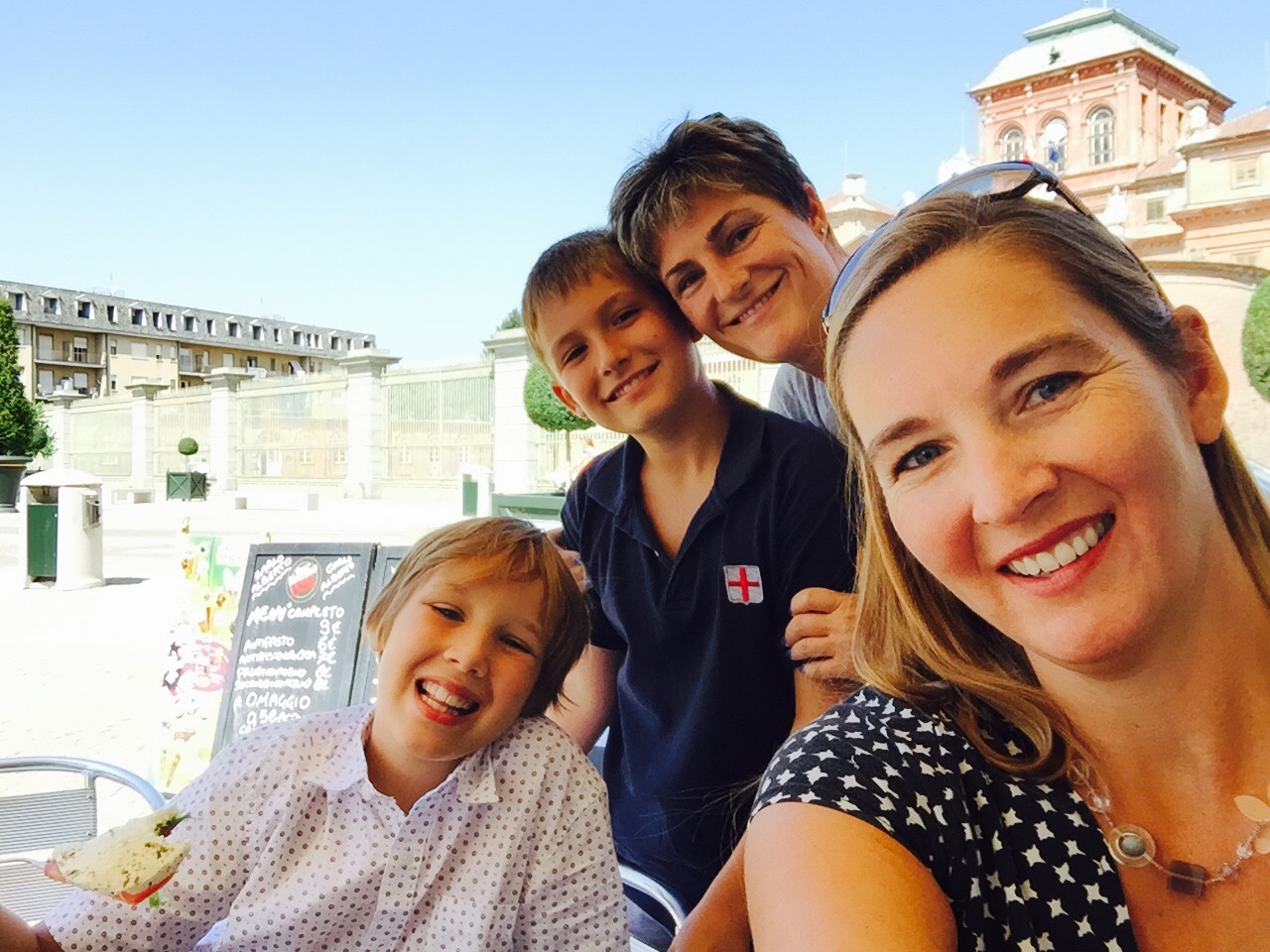 It is always fun when friends come to visit and all visits must come to an end.  To celebrate my friend Sarah and her son Nico’s visit. Nico and my baby, Emanuele are the same age (9) and they have a great time together. During their stay with us we visited a park in Borgo San Dalmazzo that has an aerial path between the trees and a smaller route on the ground with different paths and obstacles to work through. The aerial path is enclosed in nets so that losing ones balance isn’t bone-breaking or worse. The ground route could potentially produce a a skinned knee but that is part of growing up, isn’t it?
We also took a tour of the Castello di Racconigi in the town of Racconigi.  It is a beautiful residence that once belonged to the Savoia family that ruled the Kingdom of Italy from 1861 until they were exiled in 1946 after which Italy become a Republic. Racconigi has the elegant rooms that one expects from a castle and an extensive park where migrating storks stop and nest. The castle actually has a number of nests on it which are easily visible when looking at the facade.  My favorite part of the tour however, is the kitchen.  I very much doubt the Royal Family ever spent much time here and it is magnificent.  I can only imagine how many people worked here to feed the family and their guests when in residence. 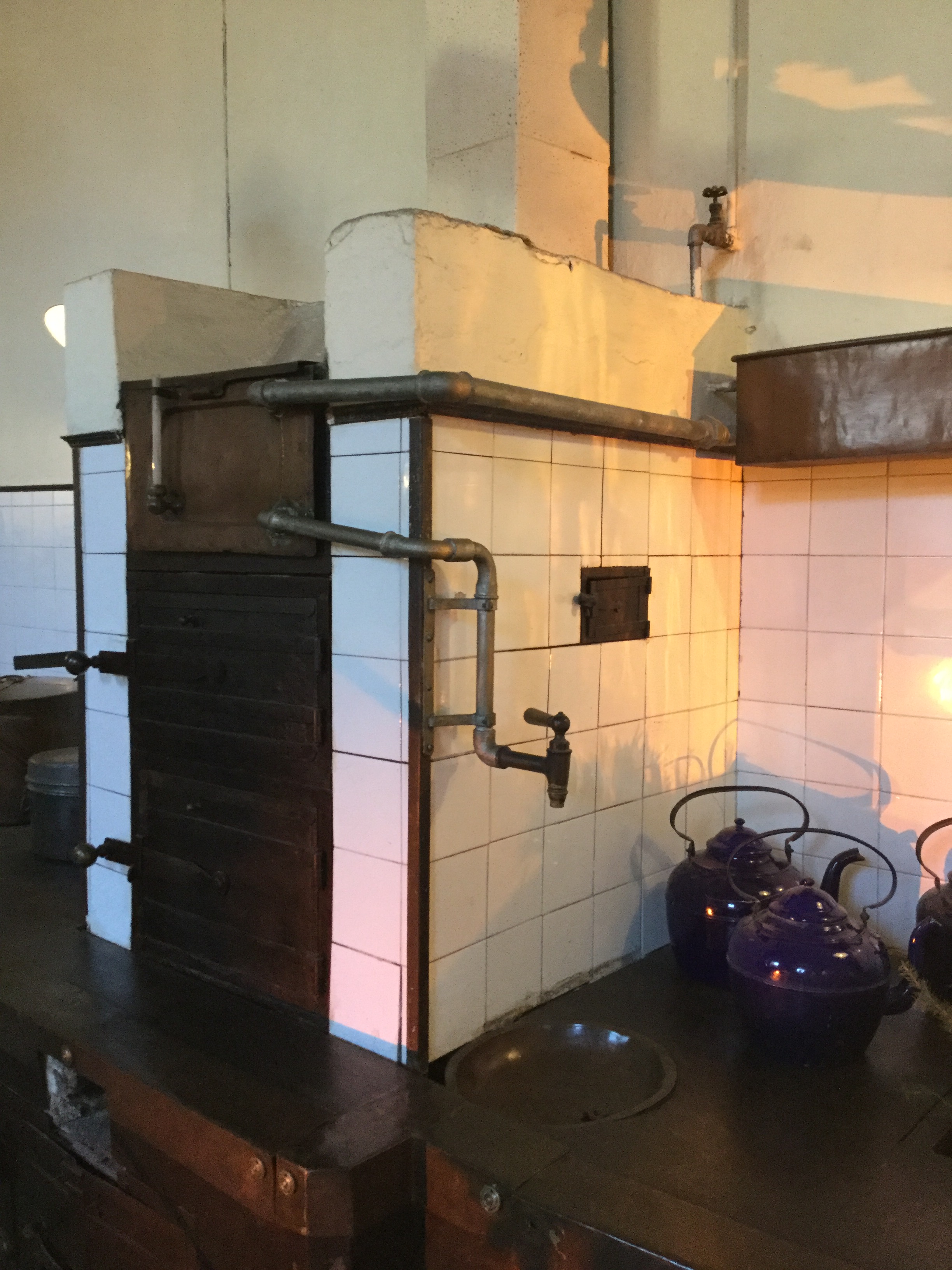 Sarah and Nico’s last day with us was not so spectacular. Nico got a stomach virus that kept him down for the day…we hung around the house and made dinner a celebration. The last time I visited Sarah she pulled out an amazing bottle of Leonetti Cabernet Sauvignon. It’s hard to top that but I decided we should enjoy a really good bottle of wine at dinner. A bottle that when it was given I was told it would be one of the best wines ever…
The best bottle ever was given to me years ago by another friend who is quite the connoisseur and as he handed me the bottle (roughly 10 years ago) he said this might be the best bottle of wine in your cellar ( I am not a collector but have some nice wine tucked away in my cantina).  He was exaggerating a bit but is was a very nice bottle.  The wine was Canua Sforzato 2001 Sertoli Salis.  Sforzato is a passito wine (the grapes are partially dried) and it is fermented dry… most passito’s are sweet.  It is made in  Valtellina in the region of Lombaridia from the Nebbiolo grape which is the same grape that is used to make Barolo and Barbaresco wines.  It went beautifully with the cheese plate and salad that we had for dinner.
Sarah’s departure essentially marks the end of our summer.  My husband’s holiday has ended and very soon mine and the kids will end too.  Here’s to good memories and happy futures…Salute!