Carnevale is still hanging in the air even though lent has begun.  We have lots of Carnaval celebrations all over Italy.  From very small, local celebrations, where costumed children throw fistfuls of recycled paper confetti, creating paper rain, to the elegant costumes donned by Venetians and visitors to the famous city.  Rio di Janeiro and Venice are the considered the most important carnavals in the world, but coming in third is another Italian town that many people outside of Italy have never heard of…Viareggio.
Last week I had the opportunity to visit this amazing carnaval on a business trip (I have a great job). Living in Italy, I knew about it and had even seen it on TV but never had the chance to attend…now I want to go back!
Carnevale in Viareggio Tuscany, started in 1873, and has become the largest folk event in Italy, with a budget of 5 million euro.  Historically, the carri,  or floats which can be 60 feet tall and 36 feet wide, were built wherever they could find room; underneath the city’s loggias, in the Politeama theater or anyplace there was enough space to plant some poles and cover them with canvas to create a shelter.  Today, the floats are made in the Cittadella (small city). Sixteen giant hangers in an elliptical square, that employs famous international artists and local artisans year round.  One of the hangers is part of the museum inside the cittadella and is worth a visit if you are in the area. 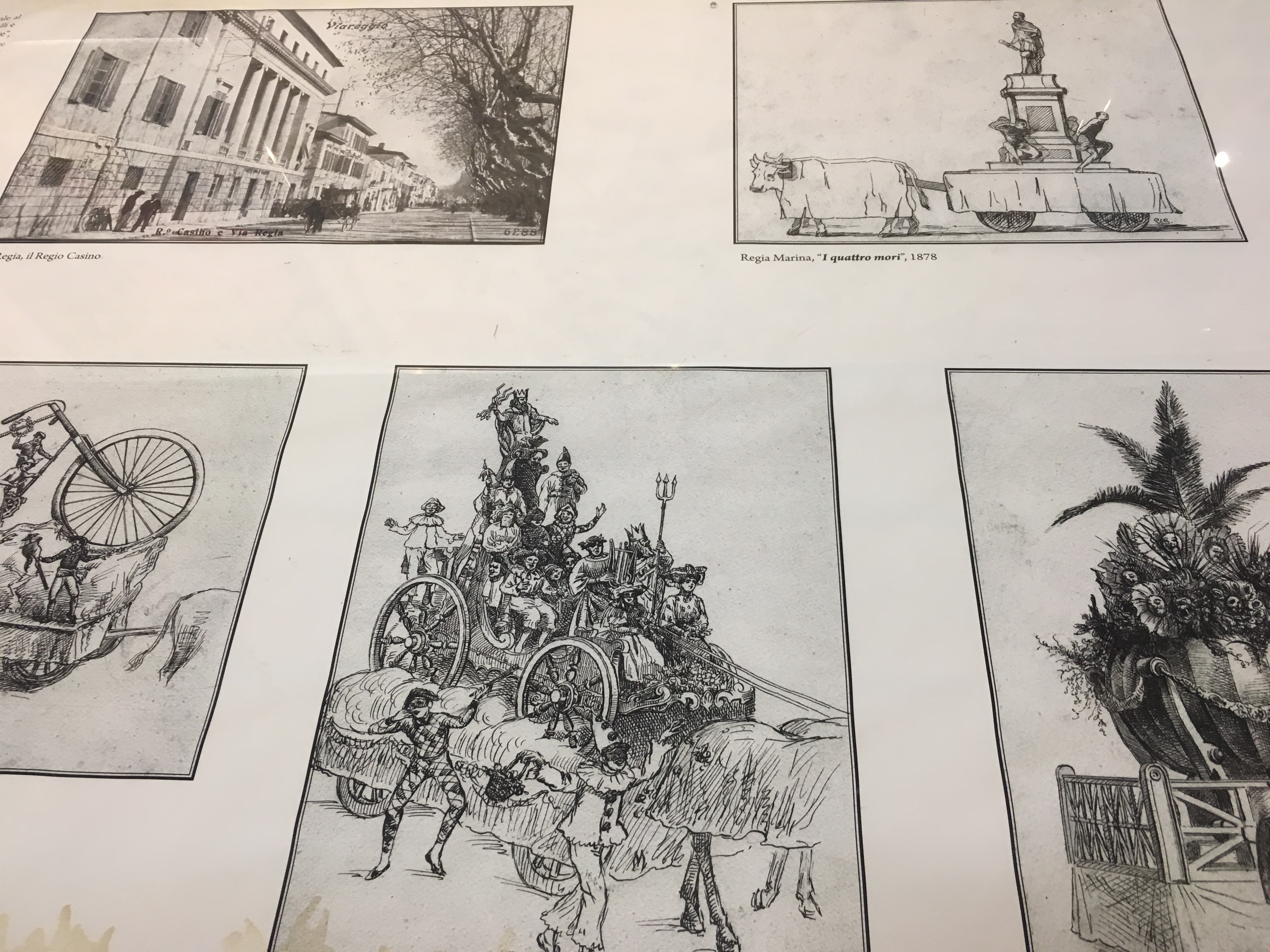 The very first float done in 1873 was created by some wealthy and tipsy citizens who went to protest high taxes in front of the mayors house. It grew from there with pauses during the first and second world wars and has been held annually every year since and televised since 1954.

In 1925, local sculptor, Antonio D’Arliano applied paper-mache figures to an iron and wood scaffolding and this method is still used to make floats today.   Paper-mache was easy enough to make with recycled newspaper and inexpensive materials, flour and water.  The artist starts by making a wooden cage using something that looks like cane.  Clay is then used to create the form from which  a plaster cast is made to create a negative. 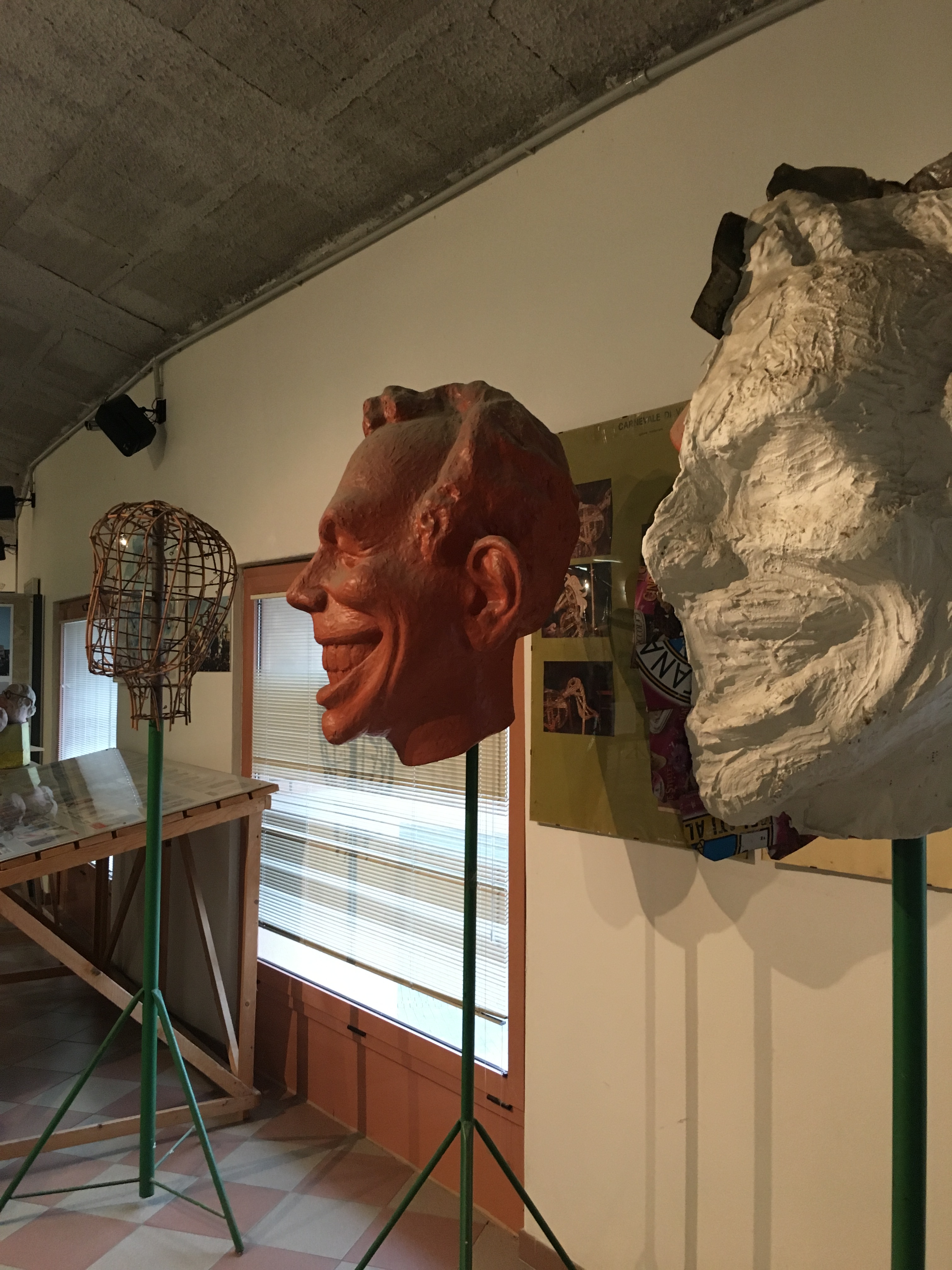 Inside the negative, the artisans, using flour, water and old newspapers create the form for these amazing creations.  A bit of paint, and whatever pulleys and levers are necessary to make them move, they are then mounted on iron and wood scaffolding and magic is made!  The original floats were pulled by oxen and horses, now they use tractors. 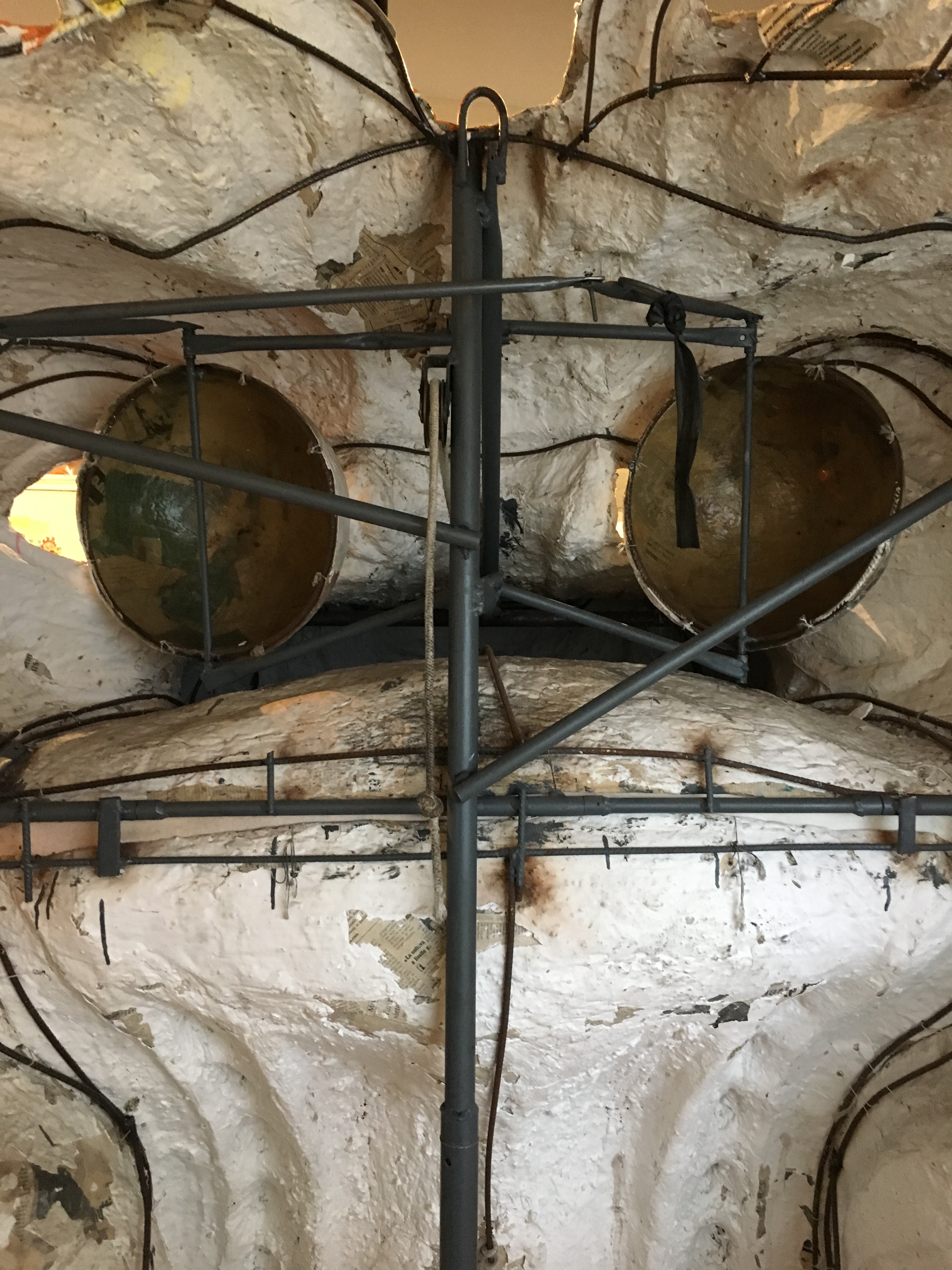 Behind the dragon’s eyes…the cord is attached to a pully that moves the eyes.

The themes of the floats are political and satirical, remember, this tradition started as a protest!  Some of this years themes included smoking awareness, the delicate nature of peace, war, mafia, and corruption in Italy.  In addition to the floats there are also groups of masquerading folklorist performers, and individual masks.  Some of the individual masks can weigh more than 150 pounds.  Imagine walking around with that on your back for a few hours! 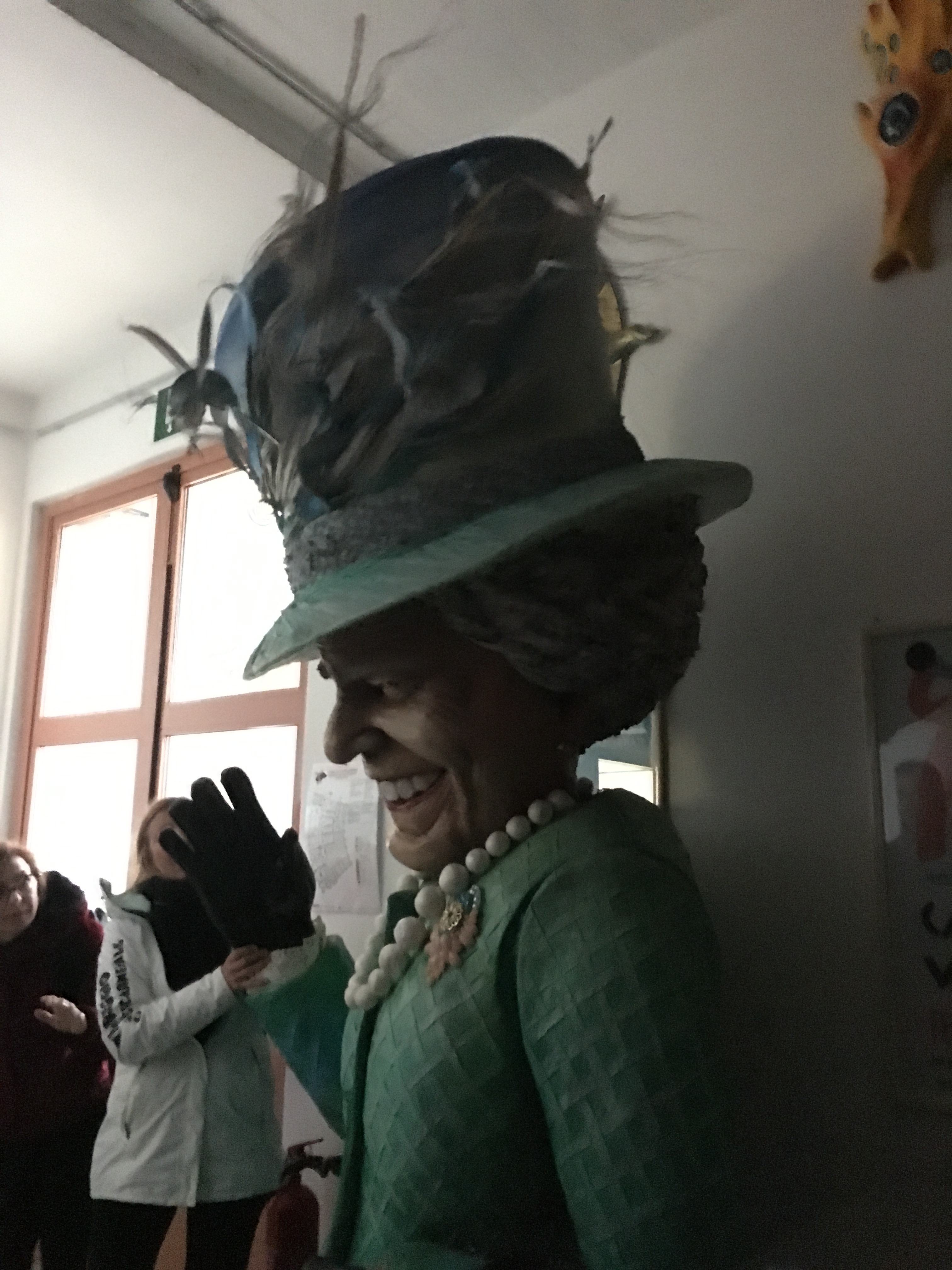 Designed to be worn as an individual mask, the queen weighs around 160 pounds! 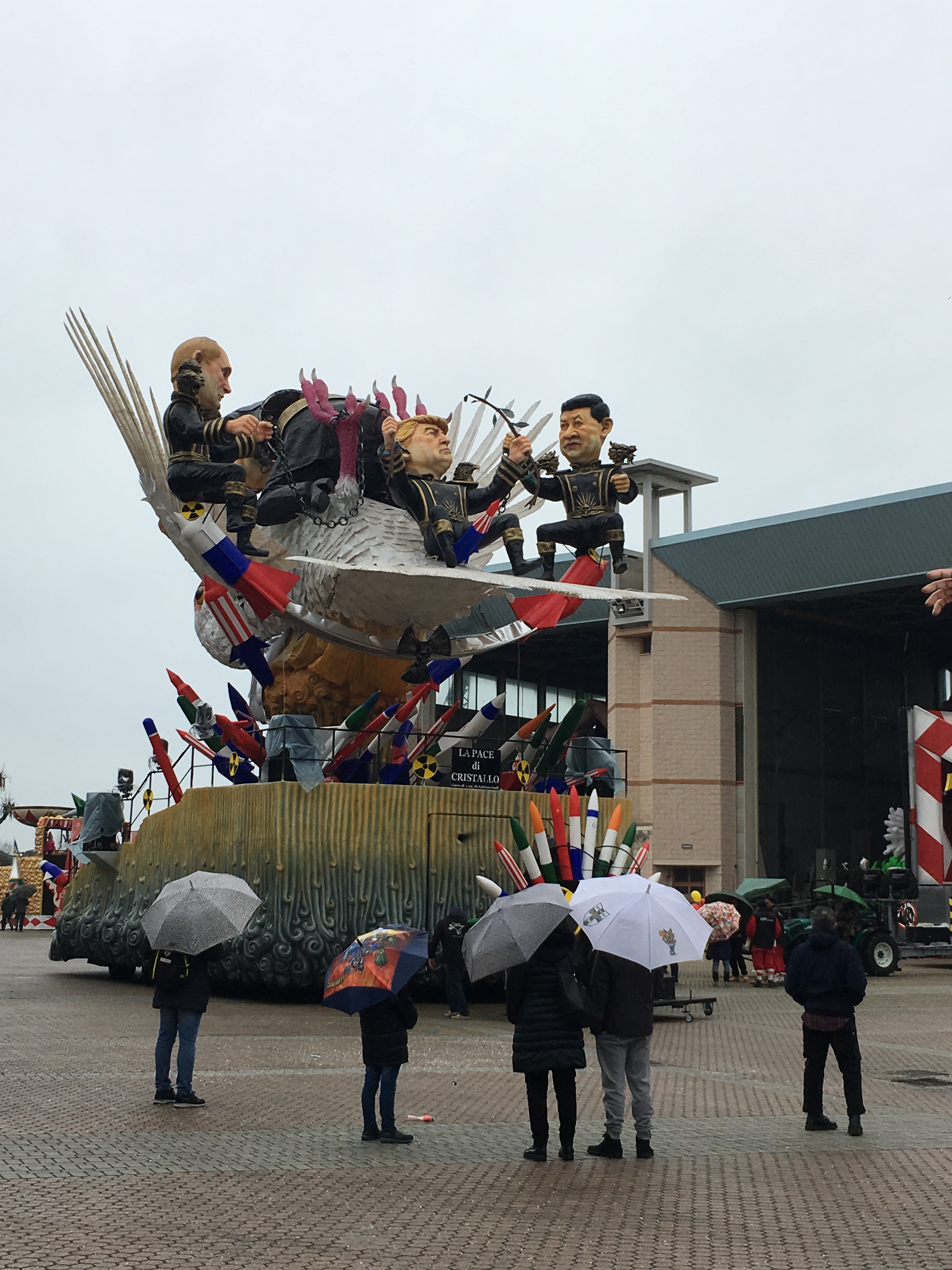 this is the back side of “Crystal Peace,” by Fabrizio Galli.  It portrays a dove with an olive branch in it’s mouth (a symbol of peace), struggling to protect itself from the “great powers” of the earth. 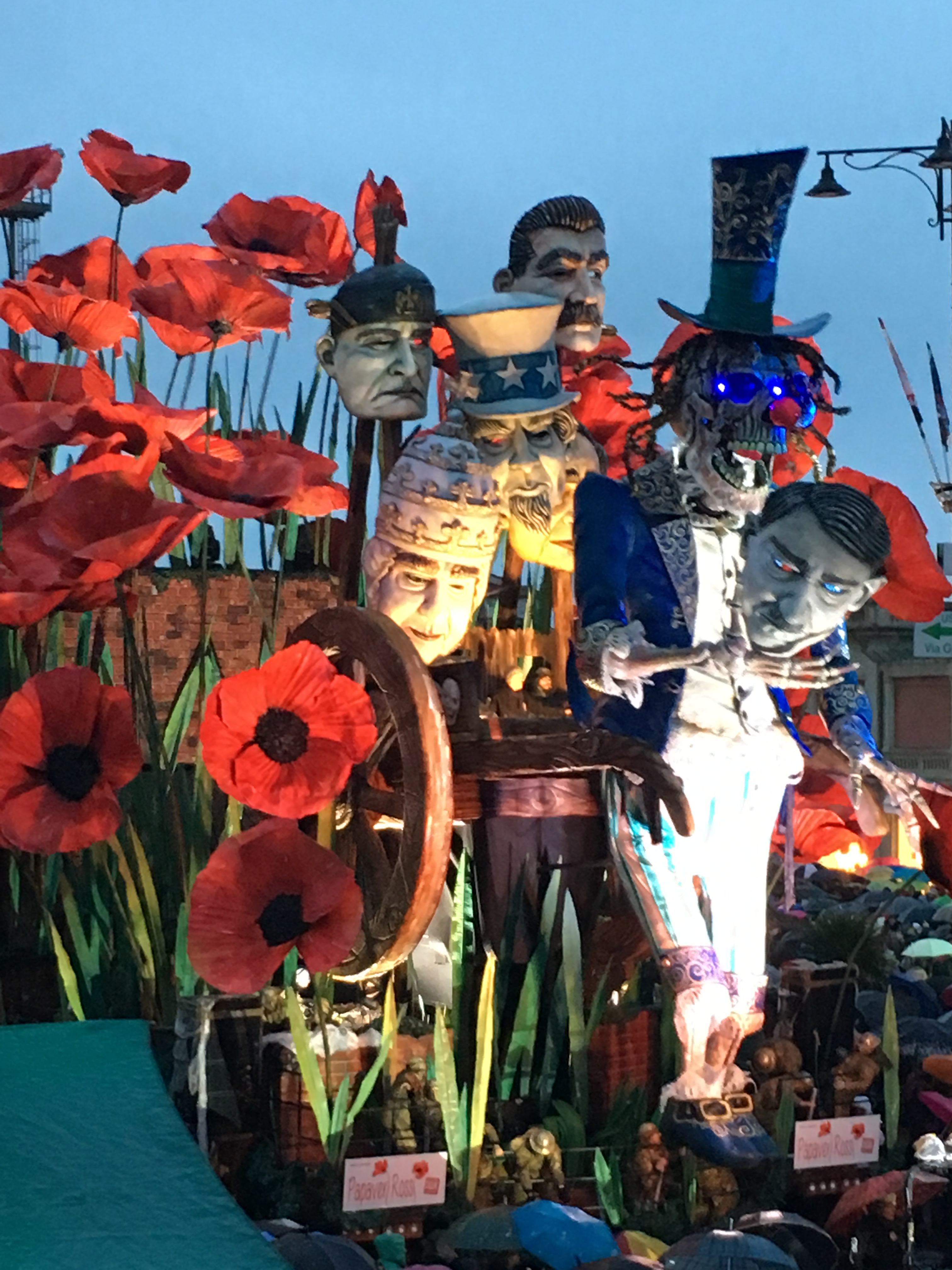 Red Poppies by Fratelli Cinquini…”War has many masks but only one face, death…” 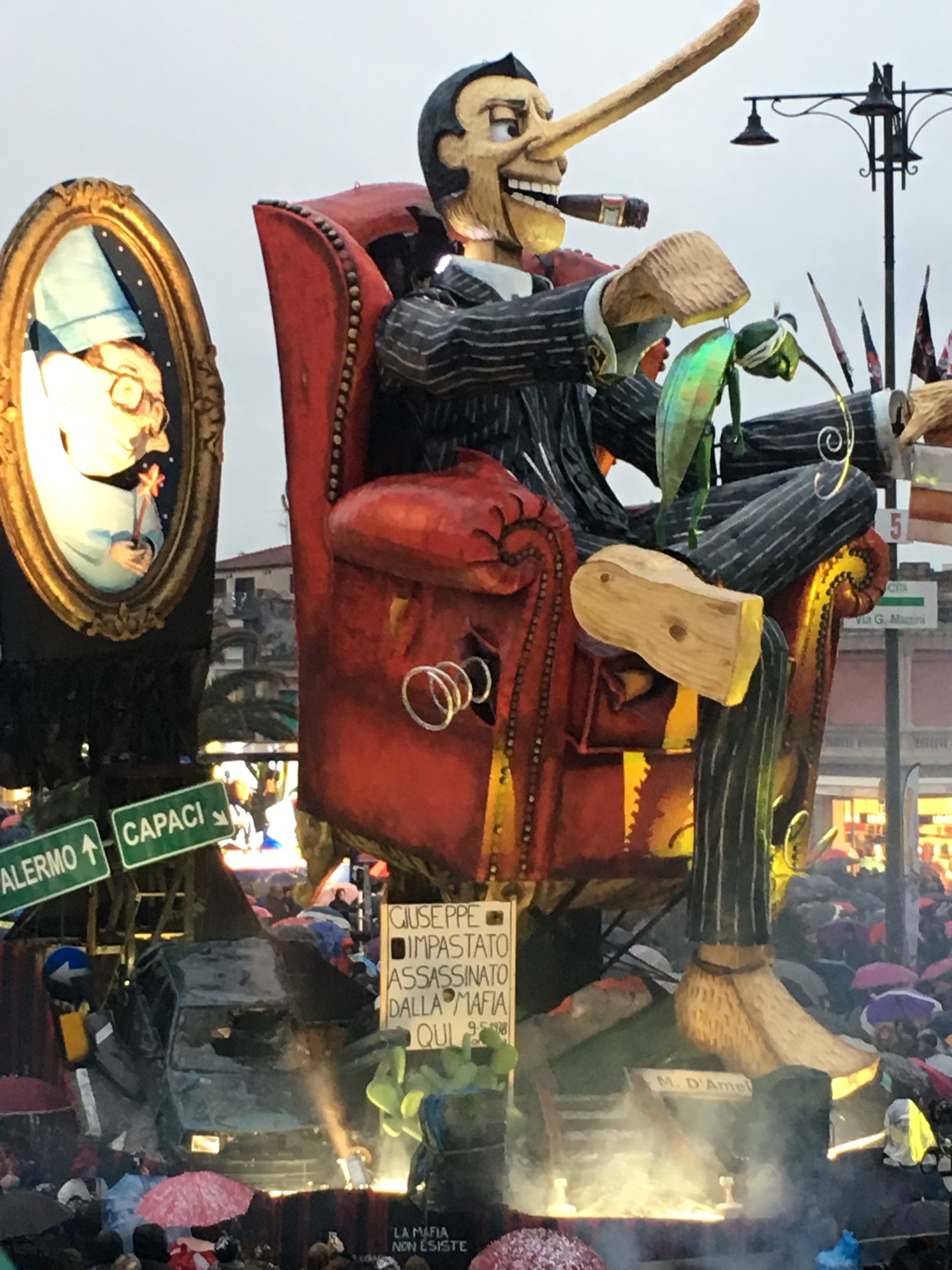 “Mafia does not exist,” by Edoardo Ceragioli…except we know it does

This year there were 5 carnival parades in Viareggio starting at the end of December and ending on the 17th of February.  The dates change every year depending on when lent begins.  Next year the festivities will start on February 9th. Unlike many other carnival celebrations, there are no barriers here so spectators can move around the floats on the 2 km circular route. Tickets for Carneval cost 20 euro per person. If you feel like splurging and want a really good view, you can buy tickets to sit in the grandstand for an extra 15 euro.  The only downside during my time at the carnival parade was the weather.  While the prior week’s parade had beautiful, clear skies, we had rain and it was STILL FUN! If you go for the first or last parade you will have the added bonus of fireworks after the parade.  Honestly, if you don’t mind the cold, February is a great time to visit Italy.  The museums aren’t too crowded and the skies are often clear.  Add Viareggio as a side trip and perhaps I will see you here!