Wow, it has been awhile since I have written anything.  This, after promising to write more frequently.  Can I just say life has been busy?  I feel like I have been running nonstop since my first tour in March.  I have had a little time at home in between tours but between catching up with the kids, my husband, the house and the garden, there is never enough time.   My brother came to visit recently as well, but I was off at work for the better part of his five week visit, and he was often working when I was at home, so we didn’t get to play all that much.  My brother left with my boys for the Seattle a couple of days ago and Mauro and I put our heads down and went to work on what is the most miserable housekeeping chore of the year, varnishing the wooden shutters.  Actually, Mauro got to work on the shutters and I started on all the deep cleaning that is hard to do when the kids are around.  After two very long days, we finally took a break to pick out a birthday present for my sister-in-law, Nadia, and decided to take a walk.  We found ourselves in a valley about 30 minutes from our house and saw signs to a tiny church we visited from the outside before we were married eighteen years ago. This time, we discovered and unexpected treasure. 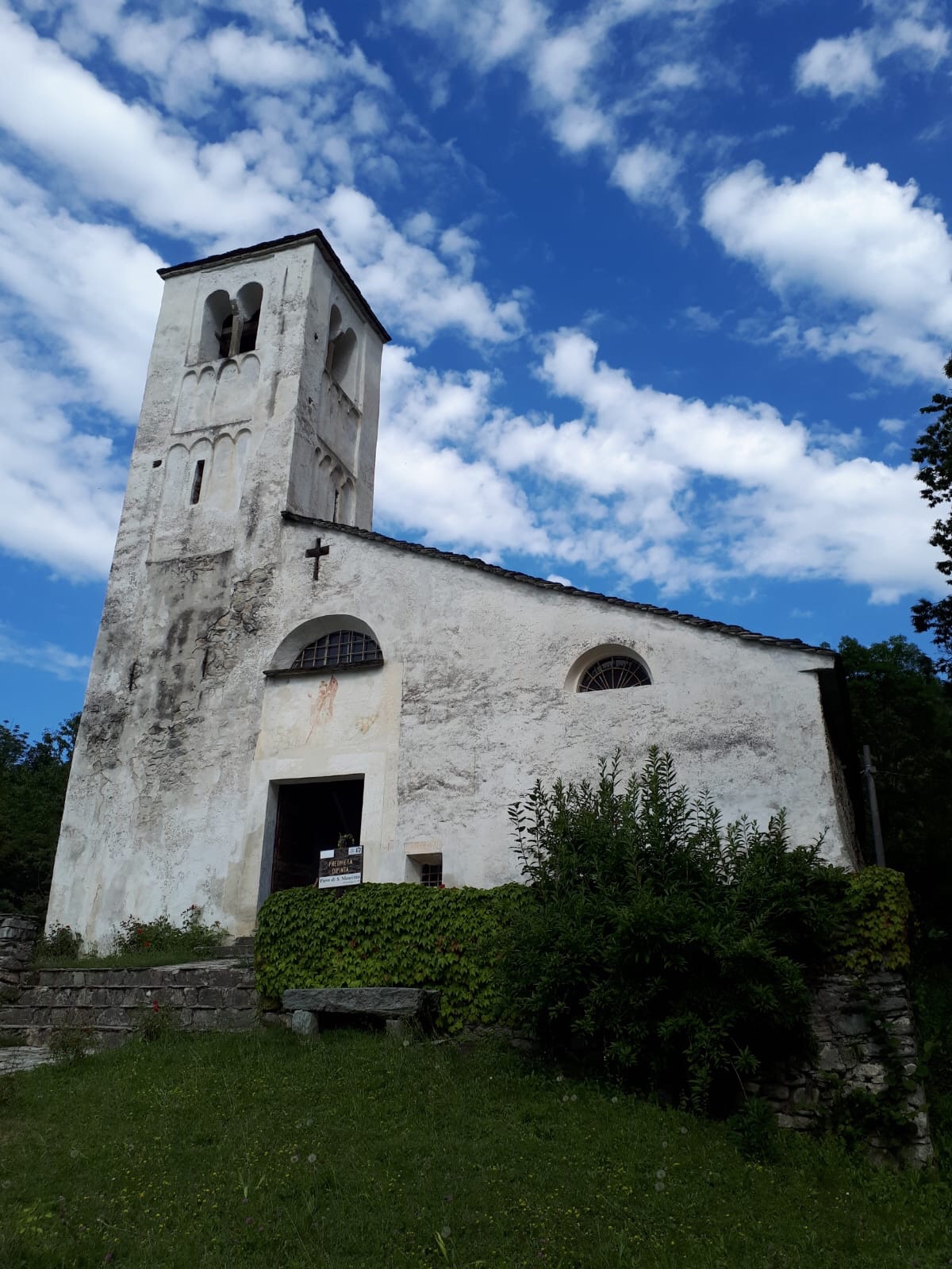 Near the town of Roccaforte Mondovi, the Antica Pieve di San Maurizio, sits on a small hill, at the base of a ruined castle that is barely visible through the forest growth.  The Church is oddly shaped because it was built with a single, small nave on the remains of a fifth century church that was destroyed by the Saracens in 960. This first nave was documented in 1018 and covered with frescoes during the XI-XII centuries in the Byzantine-Romanesque style which is extremely rare in this area. The paintings, filled with fantastic symbols that represent the battle between good and evil, are fascinating to study. What is now the main nave and the bell tower were added as the congregation grew and decorated between the XV-XVII centuries.  The church was lovingly restored in 2008.  They managed to clean off the whitewash that was used to disinfect and cover them during periods of plague over the centuries when the church was also used as a hospital. 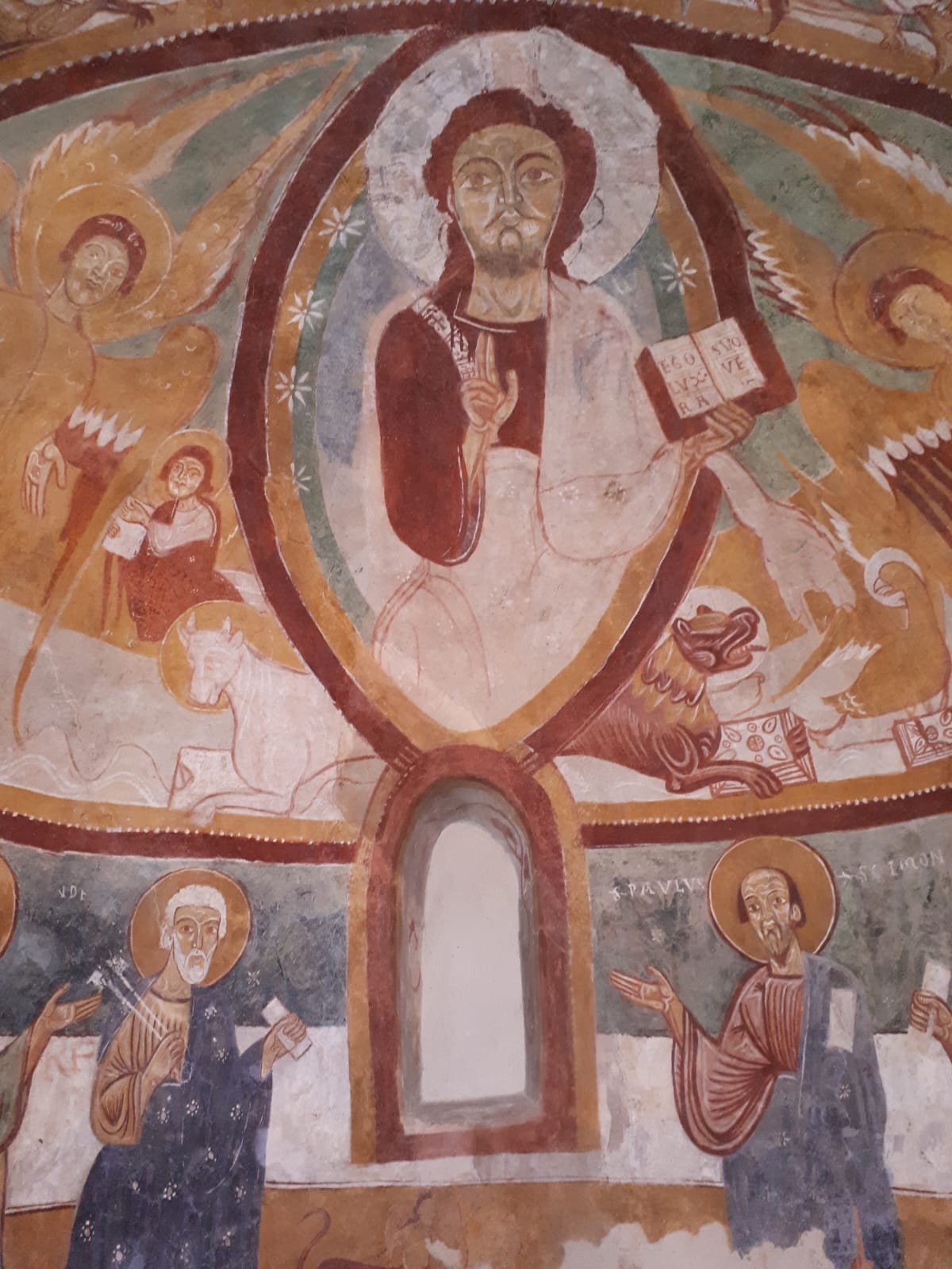 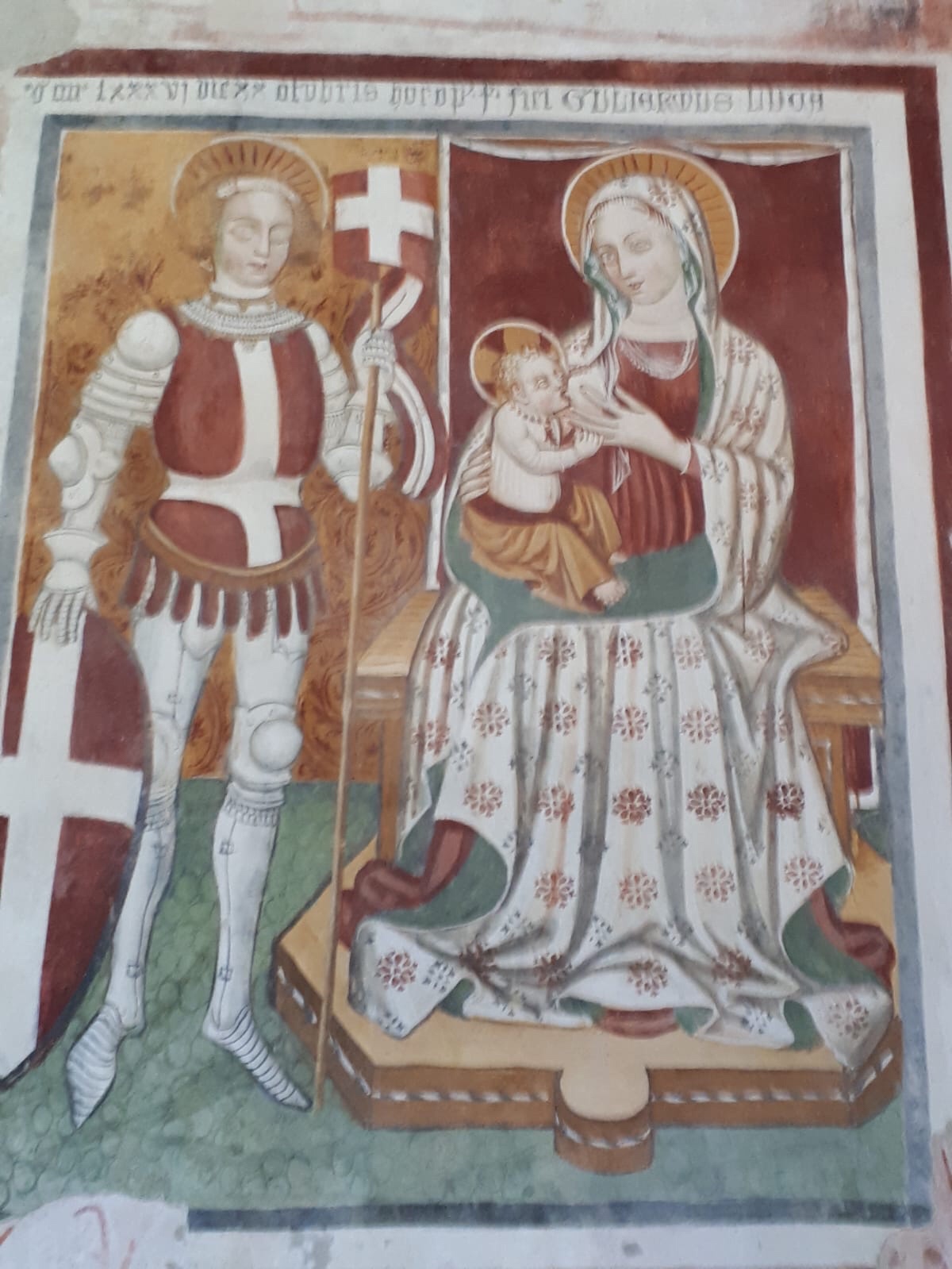 This Nursing Madonna with San Costanzo was painted in 1486 by Giovanni Mazzucco. It is the only signed painting in the church. After the Council of Trent in the mid 1500’s, nudity was strongly discouraged in art and the Madonna Lactans fell out of favor. Luckily, she was not covered up. 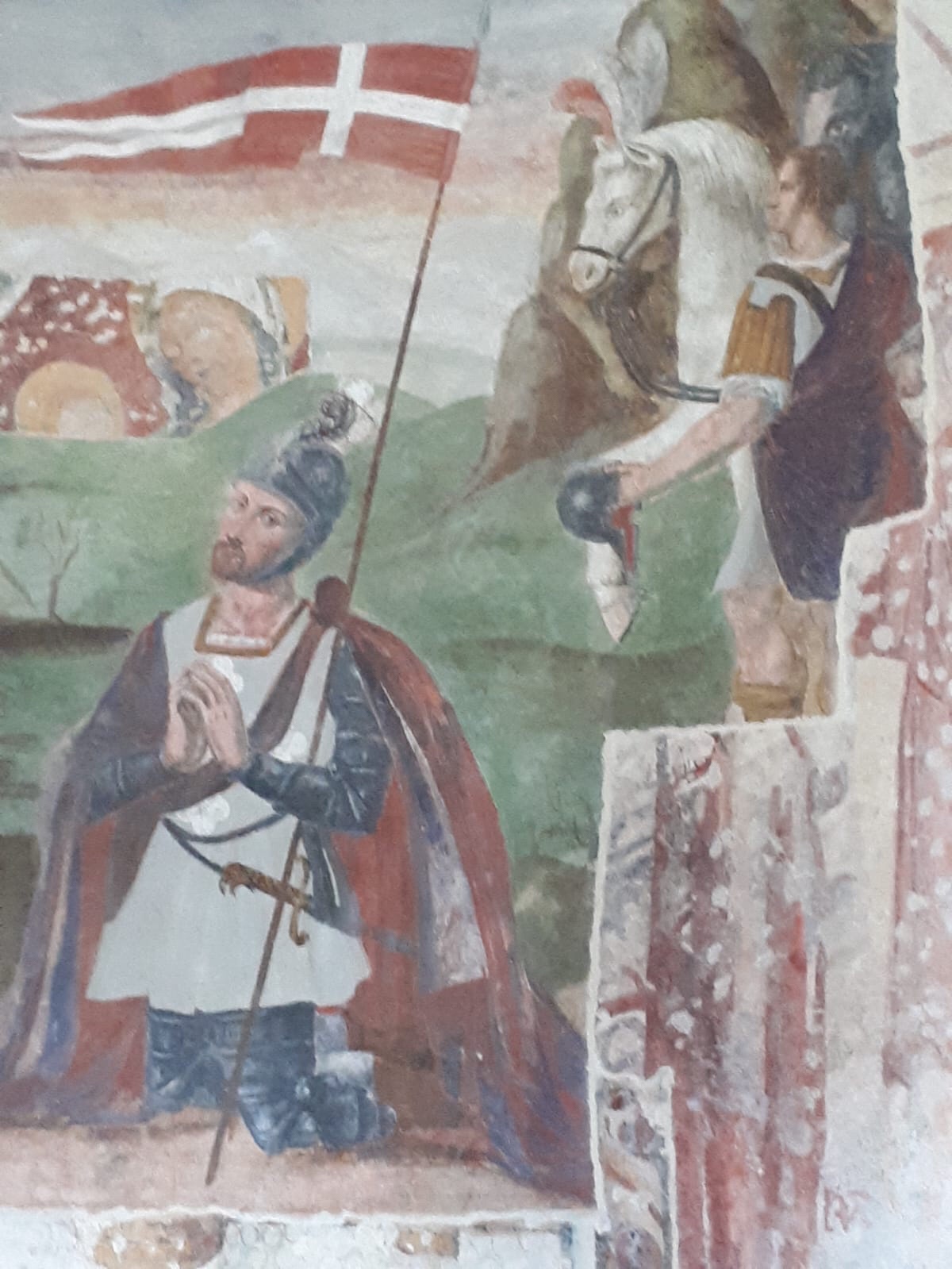 This fresco of San Maurizio above, was the last one added to the walls and covered older frescoes that we still see along the sides. When it was painted, the rest of the church was covered in whitewash and you can see the chip marks in the older paintings that were made intentionally to help the whitewash adhere.
While the church itself was lovely, this was not the unexpected treasure.  It was la signora Paula, who made our visit so memorable.  As we approached the church, we saw that the door was open.  Being a Saturday afternoon, this was unusual.  Paola was sweeping inside in preparation for a group that was coming the next day and invited us in.  She asked us how much time we had and I responded, “as much as we need. ” I could feel Mauro thinking next to me, “maybe 10 minutes.”  Paola took us to the back the original nave and turned on the lights.  It was magical as she started to describe the painting and all the symbols they contained…not because they are masterpieces, but because of her passion.  We spent an hour in this tiny church and Paola not only shared her love of the history and art, but a little bit of her life.  She was born in the Alto Adige and met her Piemontese husband near Bolzano.  He was with the Carabinieri and was sent there in response to terrorist acts led by the South Tyrolean Liberation Committee in the early 60’s.  She also talked about raising her kids and made us giggle as she talked about trying to explain how babies were made (she was pregnant) to her daughter when she was five.  At the end of our visit we made a small donation to the church and Paola wanted to give us all the postcards they had made for the church.  In the end we took a couple of the cards as mementos and left her with kisses, smiles on our faces, and arrivaderci’s. 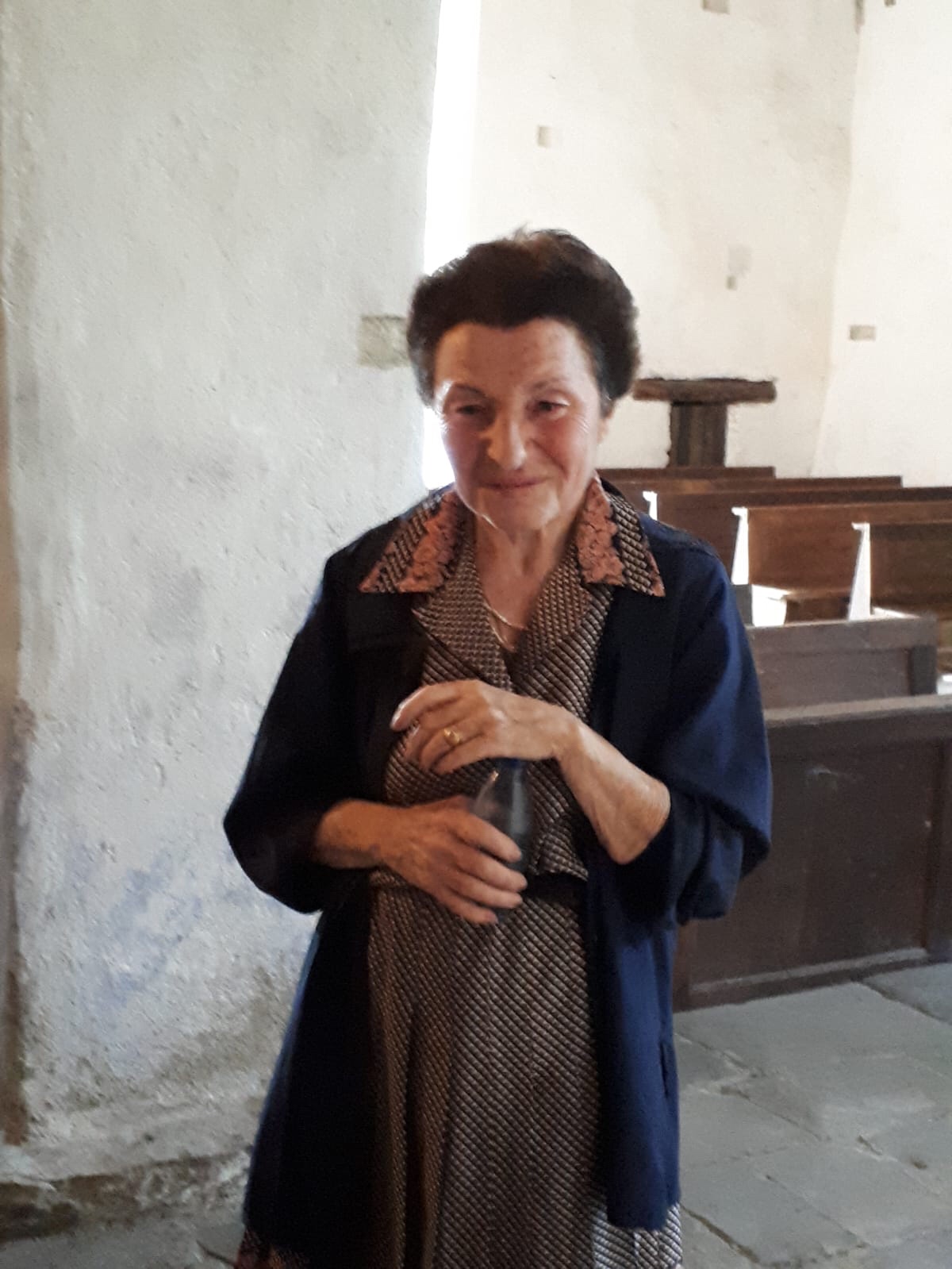 It is unexpected treasures like Paola, with her openness to share and her passion, that recharge my batteries.  The Pieve di San Maurizio is officially open on Sunday afternoons in the late spring and summer, but Paola says she goes nearly every day.  What we thought would be a nice walk through the woods became a very memorable afternoon.  If you happen to be wandering in our neck of the woods you should stop by and say ciao.