Forza, means strength in Italian,  Forza used in our daily vocabulary means to be strong.  It’s something you would say to someone going through a major illness, to someone who is grieving, going through a particularly stressful situation.  Forza Italia is what we in Italy need to hear right now but it’s also the name of a political party founded by Silvio Berlusconi so we’ve had to add a few words so as not to confuse things.   Here is a little update on where we are at from my point of view. 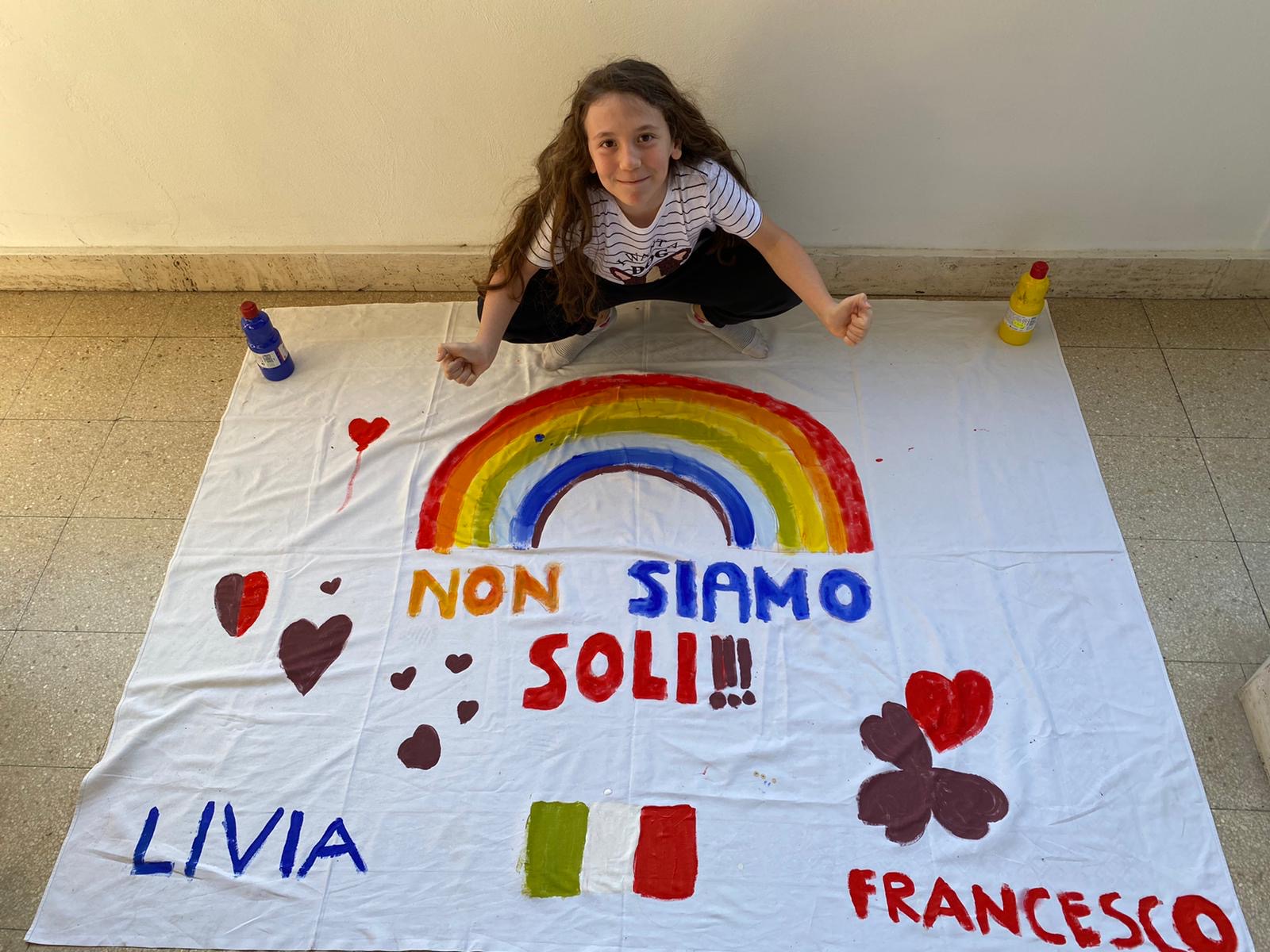 My friend Ilaria’s children, Livia, and her brother Francesco, painted this to hang outside their apartment in Rome.  It says, “WE ARE NOT ALONE!!!”

Our quarantine has officially been extended until April 13th but I suspect it will be extended beyond that based on the case numbers we are still seeing.  I’ll come back to that.  We are at the end of our fifth week of home schooling and have been assured that no one will be failed this year (yes, kids are flunked here and they usually deserve it). For all kids in their third year of middle school or their fifth year of high school, the exit exams have been the topic of the week.  Normally, if you don’t pass these exams, written and oral exams for every subject, you either don’t move onto high school, or do not graduate from high school.  My oldest, Filippo, is one of 460,000 students who are supposed to graduate from high school this year.  Based on your grades, on a scale from 1-10 with anything under 6 considered insufficient, the teachers decide if you will be promoted to take the exit exams. This is usually done after a set of state exams, called invalsi, This obstacle has been eliminated this year. Normally the exams would be administered by an external group of professors, aka not your professors.  This year there will be an external president but the kids actual professors will administer the exam and there is now a plan A and B.
Plan A…if by some miracle the Corona virus clears up in the next few weeks and school can start again at the beginning of May, there will be a light version of the written and oral exams.  If, as many people suspect, the school year doesn’t restart, the graduating class can consider themselves very lucky. Oral exams for everyone and apparently, a very light version.  For really good students this is probably very disappointing, for someone like Filippo who is quite smart but never does more than he has to, plan B sounds great.
School here however is a minor worry compared to what life is for so many of us, not just here in Italy, but in the world.  The isolation, people without work for the foreseeable future (that’s me), having to set up food programs for kids who live in food insecure homes.  Did you know that 22 million kids in America rely on school lunch programs?  Click on this article from Business Insider and consider that it was written nearly a year ago and put in this Corona virus quarantine context.  There are also so many many people dying, and we try to console ourselves saying that the majority of the people dying are old and have already lived their lives, or they have underlying medical conditions that put them in a higher risk category.  Diabetes and heart problems are just two of the conditions that put people into this high risk category. How many people do you know with diabetes?
At the end of this 5th week of homeschooling my anger and sadness over how slow the US has been to respond despite the proverbial writing having been on the wall for quite a while now is coming out and I don’t care if I upset some people with what I am about to say next.   I am American and Italian, I love both countries and there are people I love dearly in both countries and all over the world. The day I flew from Italy to Seattle in mid January was the same day the first official US case was put into quarantine in Seattle.  This new virus, not yet considered a pandemic, had already shutdown China and was starting to spread in Asia.   Two Chinese tourists tested positive in Rome on January 31st and were put into quarantine.  For a look at where we are today click here.  I am relieved that my home state, Washington, where much of this began to unfold publicly, and California, locked down early despite criticism.  President Trump’s nonchalance whilst the virus was starting to spread like wildfire in Italy and the rest of Europe and just beginning in the US was irresponsible to say the least.  From my perspective, he has American’s blood on his hands.   We can’t know how early prevention might have changed the numbers. The US might have been able to set a positive example, but that ship has sailed. Instead, the US is now number 1 for the number of active cases in the world.  I find this so sad and believe me when I say I know how you feel.  Every time I hear an ambulance with it’s siren wailing, I wonder if it’s for one of our neighbors.  Every time I see a new message from our major, I am always relieved it is not information about new cases here.

Ready for a trip into town.

Let’s try to wrap this up on a lighter note.  Anyone who knows me well, knows that I am a half glass full person.  I always try to see the bright side.  The bright side of life right now is that my immediate family and friends are well and we have had some good laughs while being locked down.  One of the highlights of my week are three Pilates sessions done in a Zoom Room with a group of friends.  I think I’ve actually lost weight.  My garden is almost weed free, I find weeding therapeutic. We have masks again and we must wear them to go shopping. I know there is a mask shortage in the states, we have had the same problem here.  Here is a creative way to make your own…https://youtu.be/Uob0AuMZynY
April 13th, my baby’s 13th birthday, is our next milepost.  Will the quarantine be lifted? I doubt it but there will still be something to celebrate that day and we will eat cake!  In my small town of 3500 people we have 5 confirmed cases of Covid19 and 8 people under strict quarantine, they can’t even go out shopping.  This, after weeks of respecting the quarantine is not a big number and it gives me hope. Through this, I continue to wish that with much of the world under quarantine, we will start to see results, but Forza, it is still going to take awhile.

9 thoughts on “Another Week inside…Forza!”