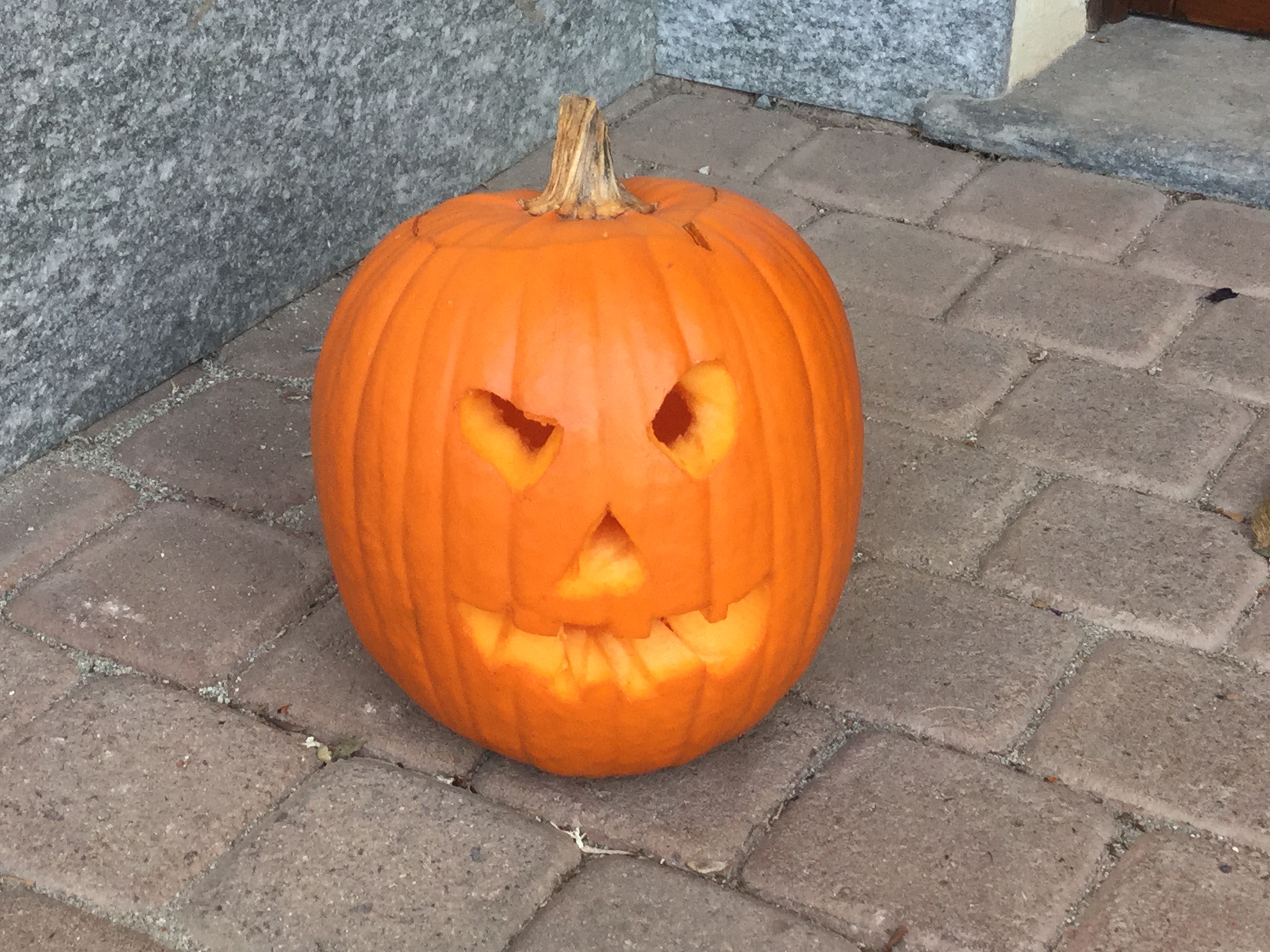 Today is Halloween…a day that reminds me of my childhood.  The fun of planning a costume and roving the neighborhood with my friends on what was often a blustery evening as it grew dark.  As a rule we were home by 8 pm since we had school the next day.  A week or so before Halloween we would either find a pumpkin patch or make a pilgrimage to the enormous pile of pumpkins outside the supermarket and pick something we could carry on our own.  We would draw very basic jack o’lanterns and cut them out with a paring knife after have cleaned out all the seeds and pulp.  My mom would roast the pumpkin seeds for something healthy to snack on between candy.  There were no special carving kits (which I think are fabulous) or fancy stencils (also great fun). If we were really lucky we might have visited one of the haunted houses put together by one of the local radio stations a few days before Halloween.  It was fun, not too commercial, just fun. Being raised by a sugar nazi, I was in it for the candy and savored all the goodies I got from my two hours of running around.
Halloween is not a tradition here in Italy but thanks to commercialization, globalization or whatever you want to call it, Halloween has come to Italy too.  After moving from the states and before having children, I didn’t really how Halloween was creeping into Italy.  The Italians have been watching our TV for years and any excuse for a party is good.  For the last twenty years, the occasion has been celebrated in some form.  In English class, the teachers always use the tradition to teach new vocabulary…black cat, witch and pumpkin are some of the words on the list…scary too!
Every year I also find Italians who protest because this is not national tradition.  One year the local florist rudely sent a group of kids from her shop when they stopped by for a treat.  This is her choice although she could have been a bit nicer.  This year, my oldest son said his religion teacher lectured them about Satanism and Halloween and how Hitler and Winston Churchill were both Satanists with mind control powers.  I really wish I could have listened to that lecture and might opt him out of religion next year.
Let’s not overthink this…More often than not, Italians have decided to adopt the less philosophical aspects of Halloween, right or wrong, and even better, done it in their own style.  Since much of the trick-or-treating is done in shops here, a stop at the butcher’ s yields a mini salami, the gelateria, a small cup of gelato, the baker’s, a piece of focaccia or pizza, I love it!  Just like in the states though, in most shops, candy is king, it is also easy.
So what do I do for Halloween since this is a day that I can still claim and want to share with my kids?  Pretty much what I did as a kid.  Every year I carve a pumpkin or two and roast the seeds to snack on.  This year Emanuele did the carving.  Finding the perfect pumpkin has always been a challenge here and until this year, I never managed to grow them.  This year I am very happy to be a pumpkin mother and I have already tucked some seeds away for next year. 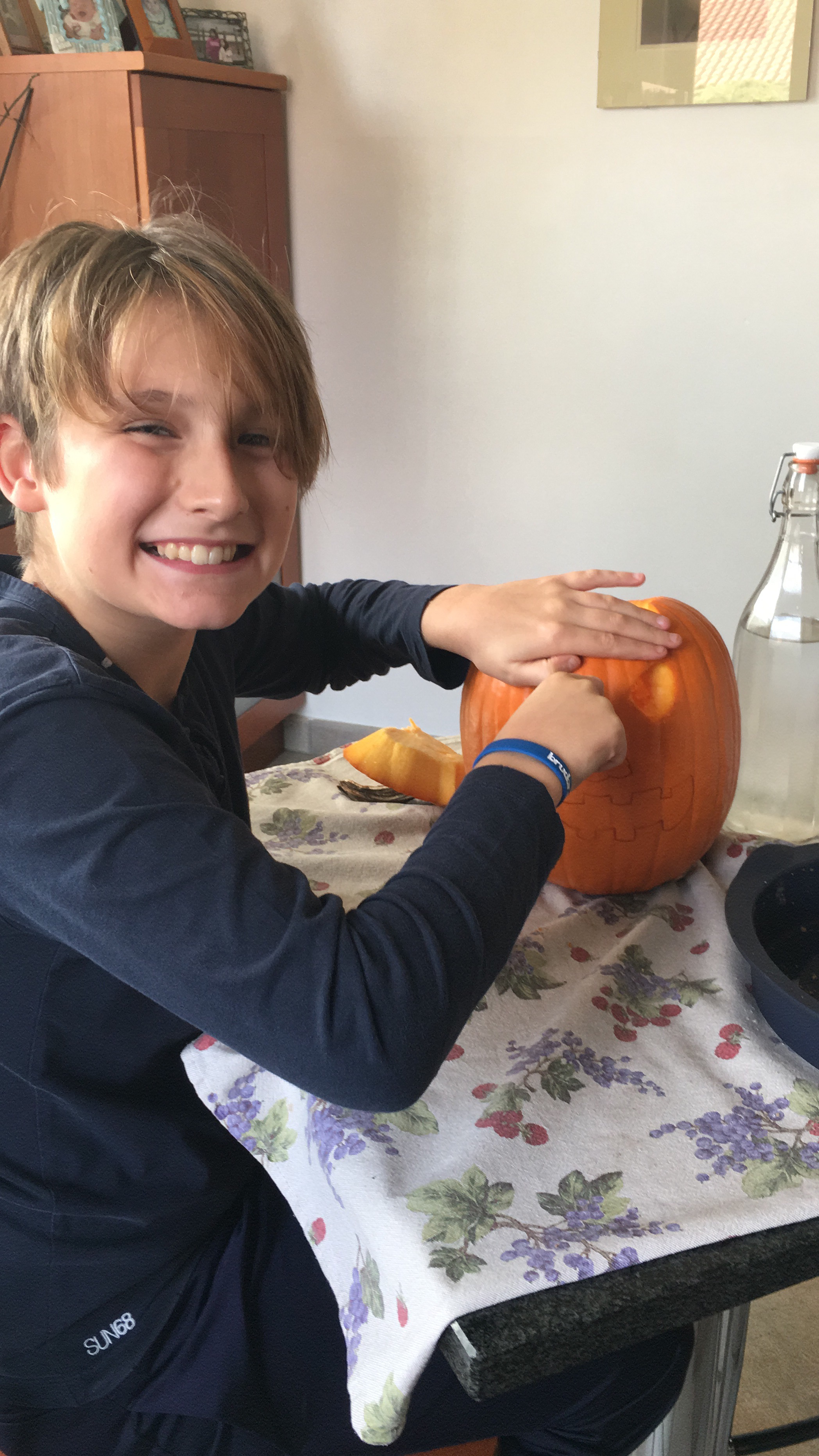 The candy section of the supermarket here does not magically expand as it does in the states.  This year I managed to get my hands on mini Mars and Snickers.  I know this doesn’t sound like much but it’s actually quite a change. Now I hope to get some kids trick-or-treating!  You would think that being the only American in town I would be on the list of friendly places to go but since we are on the edge of town this is not the case. If nothing else my kids friends know and will be happy to help empty the candy bowl. 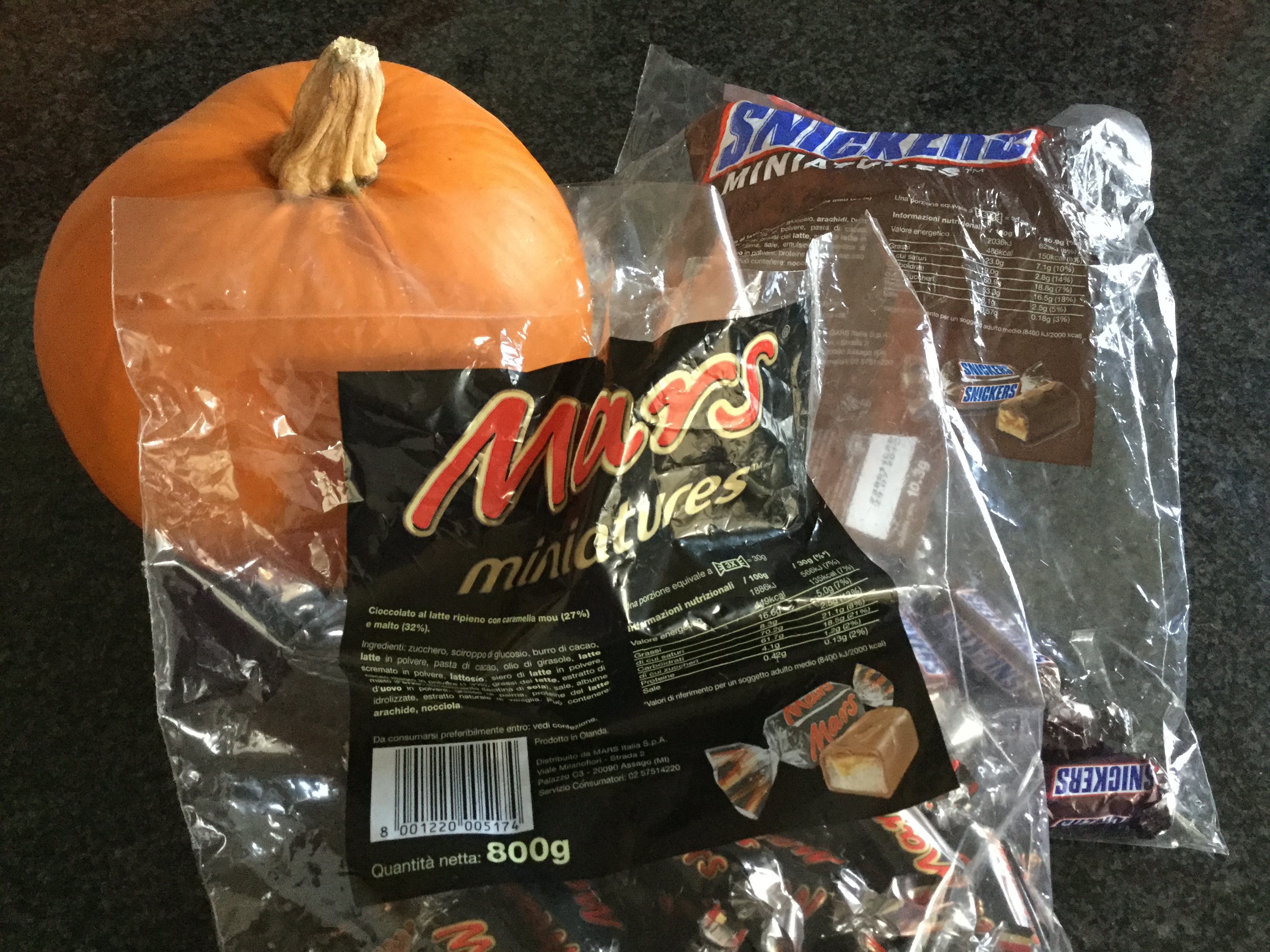 You have no idea how happy these make me.

The Italians seem to think that Halloween costumes have to be scary since that’s what the marketing tells them.  How disappointed they would have been about the pink and white bunny costume my mom made me when I was eight.  I think I dressed as a gypsy a few years running and as a wood sprite.  I don’t think I have ever dressed as something scary in my entire life…not even a witch, but my kids might argue that I am a witch every day….cackle cackle!
Our costumes are whatever the kids want.  We have a costume bag of hand-me-downs from Mauro’s nephew and costumes that his mother, Maria, made for carnival, a nice reminder of her.  Emanuele got himself a rat mask at the fabulous Archie McPhees on a trip to Seattle one year and is happy to keep wearing it. 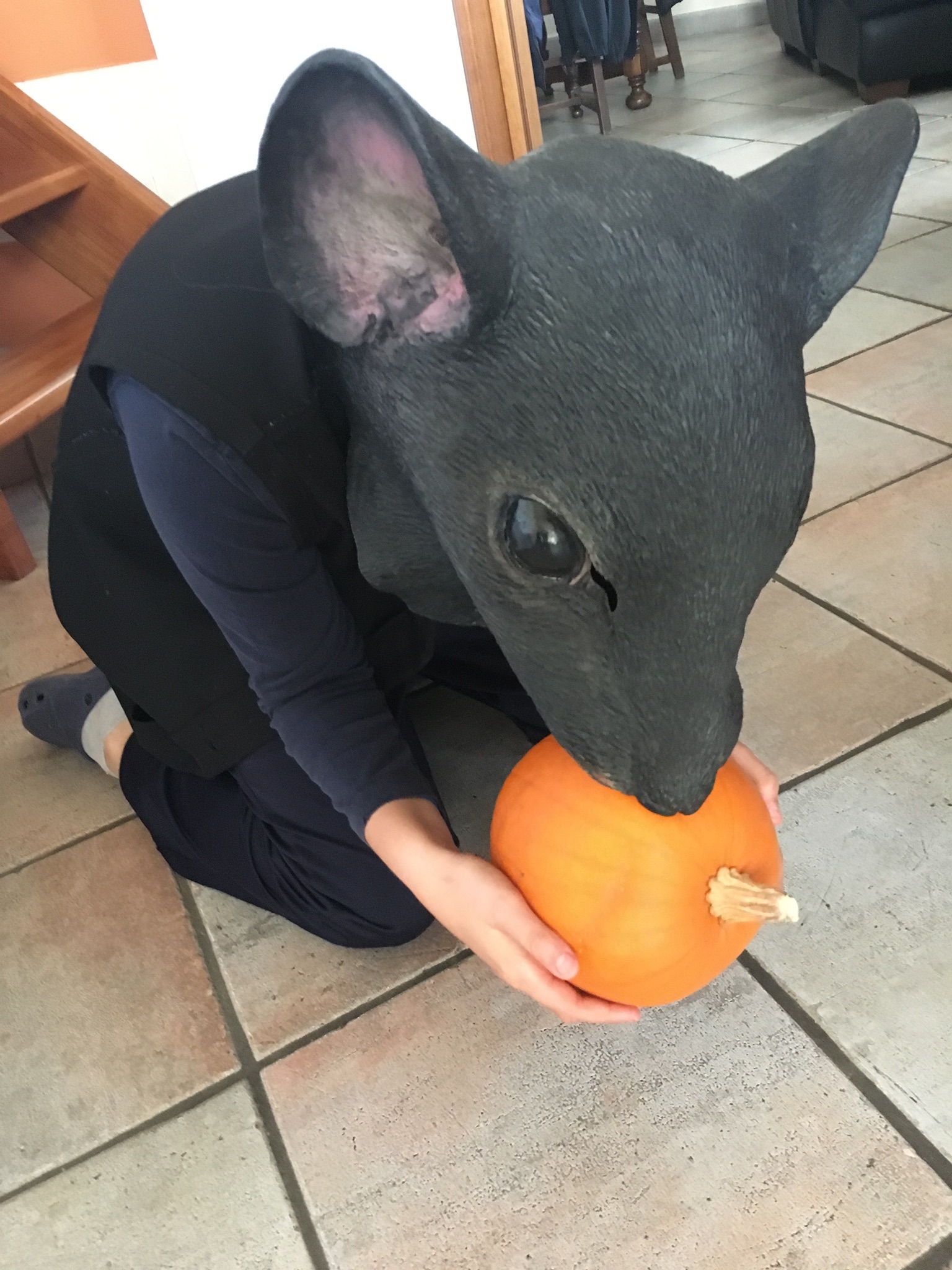 I Smell a Rat!

We have the added bonus after Halloween of November 1st being an official holiday, Tutti Santi, All Saints Day.  Our tomorrow will include a trip to the cemetery, actually multiple cemeteries in remembrance of our dead and we get to sleep in.. ahhh! 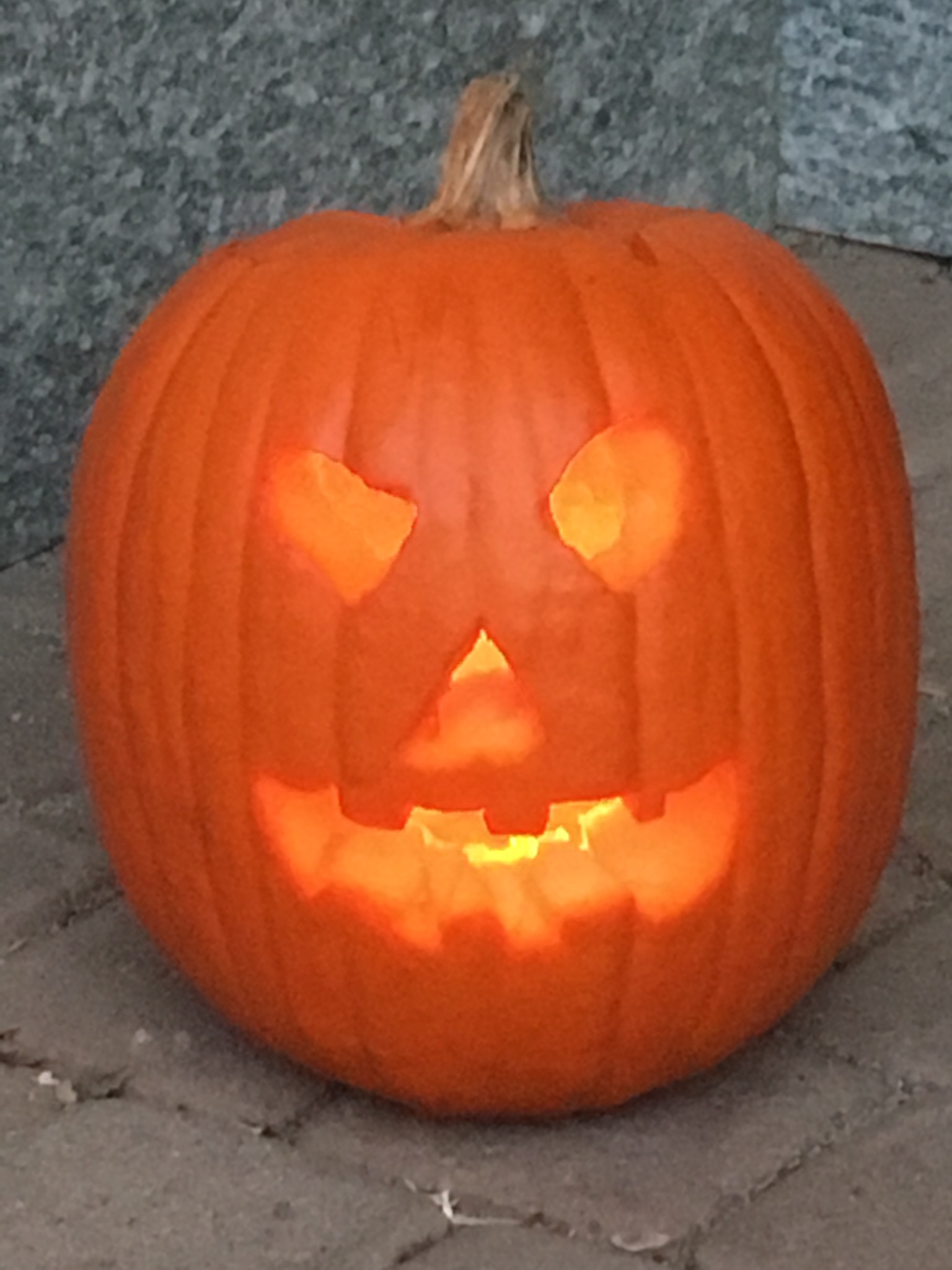 Wherever you are and however you decide to celebrate, there is no need to translate…Happy Halloween!