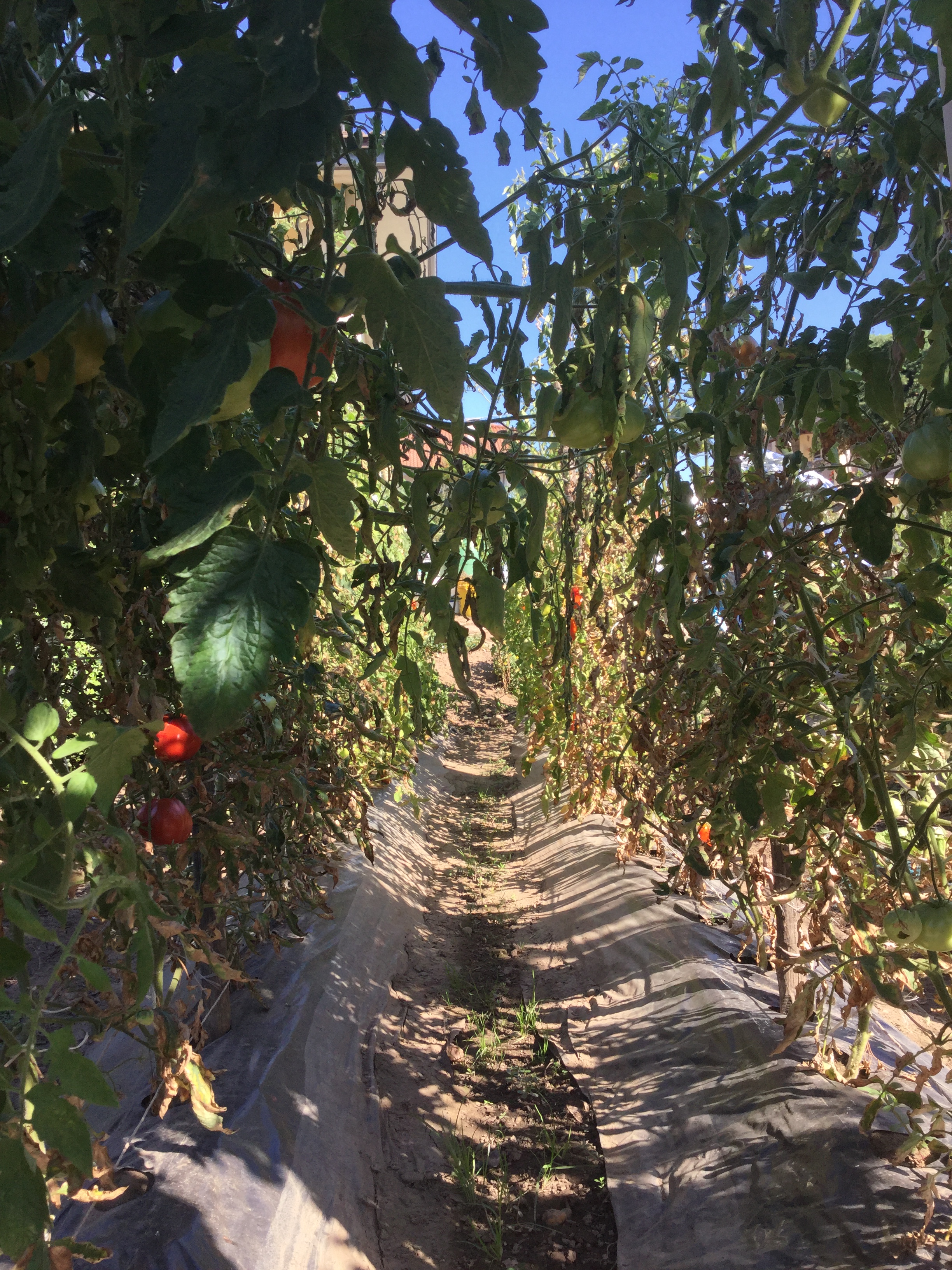 It is that time of year again when the garden is full of tomatoes and it is time to make la conserva, the base for most of our tomato sauces that we learned from Mauro’s parents. It is truly a labor of love.  We enjoy good food, knowing what is in our food, and in this case, it takes some hard work.
When Mauro and I moved in together in 1999 and decided to live next door to his parents, all we had was an empty apartment; the bathroom was the only finished room in the house.  If you read about mattress making, you know we had a bed and pretty much nothing else.  A few months after moving in together, we went back to the states so that I could move my possessions to Italy, so I missed a very important summer rite at the Mauro’s house, making tomato conserve. We moved in together in May and it was not until ten pounds later (Mauro’s mom was an excellent cook and I was not good at saying, “no thank you, I am full.”) and October that our new kitchen came.  I was so excited to have my own kitchen again after having eaten as a guest at my in-laws for months.  I had not been back from the store for more than 30 minutes when my husband came upstairs and said, “Mia mamma mi ha fatto un culo così!” His hands forming an upside down L shape. In Italian, this translates to my mother ripped me a new one, or more politely, “she chewed me out.” 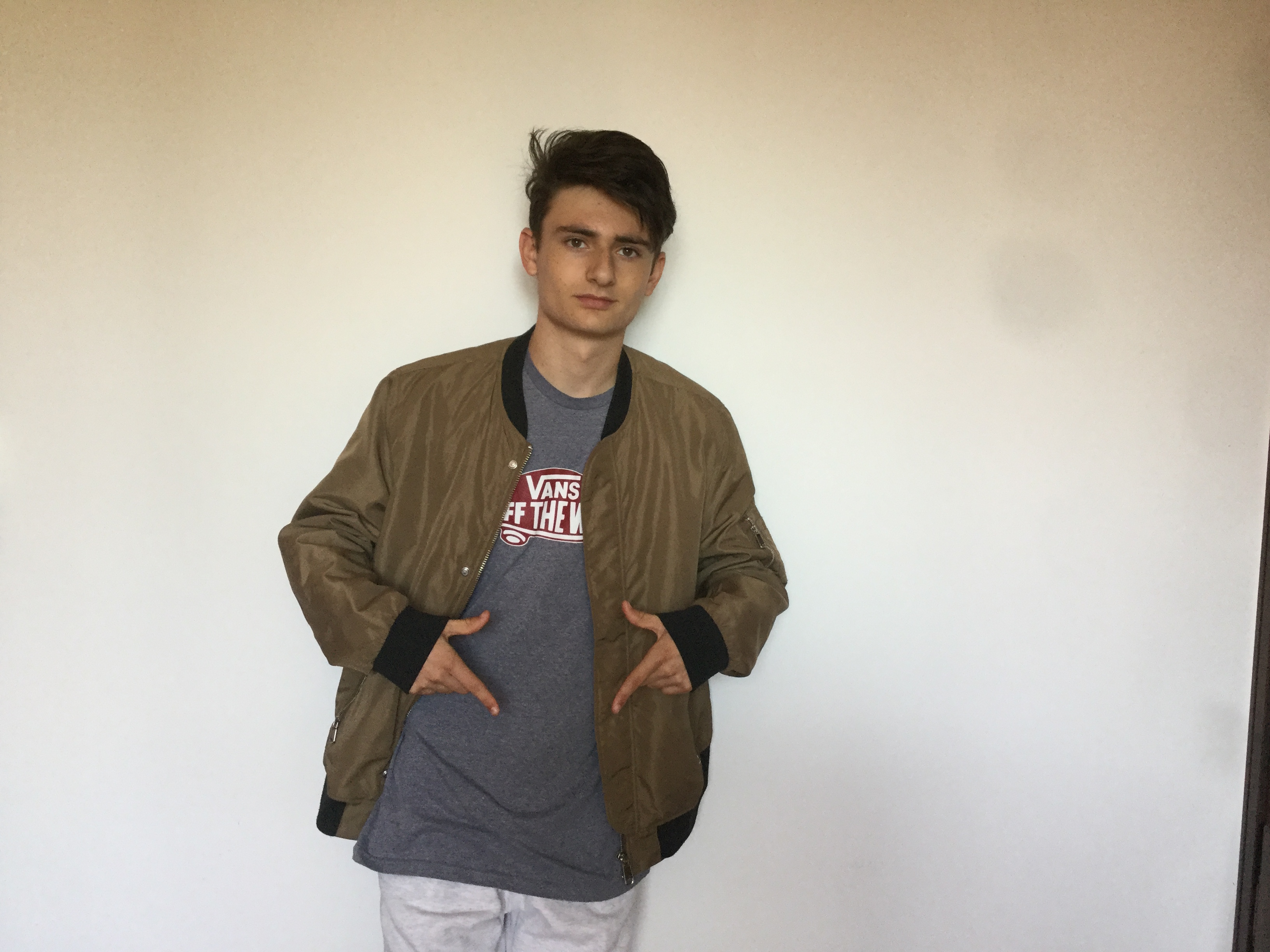 I would never chew this one out!

Culo is a slangy term for butt, for example, the expression “che culo!” Translates to “how lucky!” the word for a seesaw, batticulo, translates to butt beater. What could I possibly have bought from the supermarket that got Mauro chewed out? The ingredients to make a homemade tomato sauce…I did not know about la conserva, and it was not until August, a year later, that I found out how la conserva was made.
We have a very big garden and my in-laws, Maria and Pino, always grew tons of tomatoes. Every year when they were ripe, they would pull a blackened pot out from the Cantina, Pino would wield a very big stick (for stirring), and they would make tomato conserve over an open fire out in the garden.  As long as we are able bodied and like to eat, we will continue this tradition…
This year the tomatoes are early and we have already made two batches (40lbs. of tomatoes) of conserve… it is a big job but worth it!  Here is how we do it…once we have enough tomatoes we pick them, wipe them off, and throw them in the pot.  We pick fresh herbs, savory and basil, some carrots, celery, garlic (not too much) and onions, which we wash and throw in the pot. Once everything is together, we light a fire underneath the pot and start cooking. 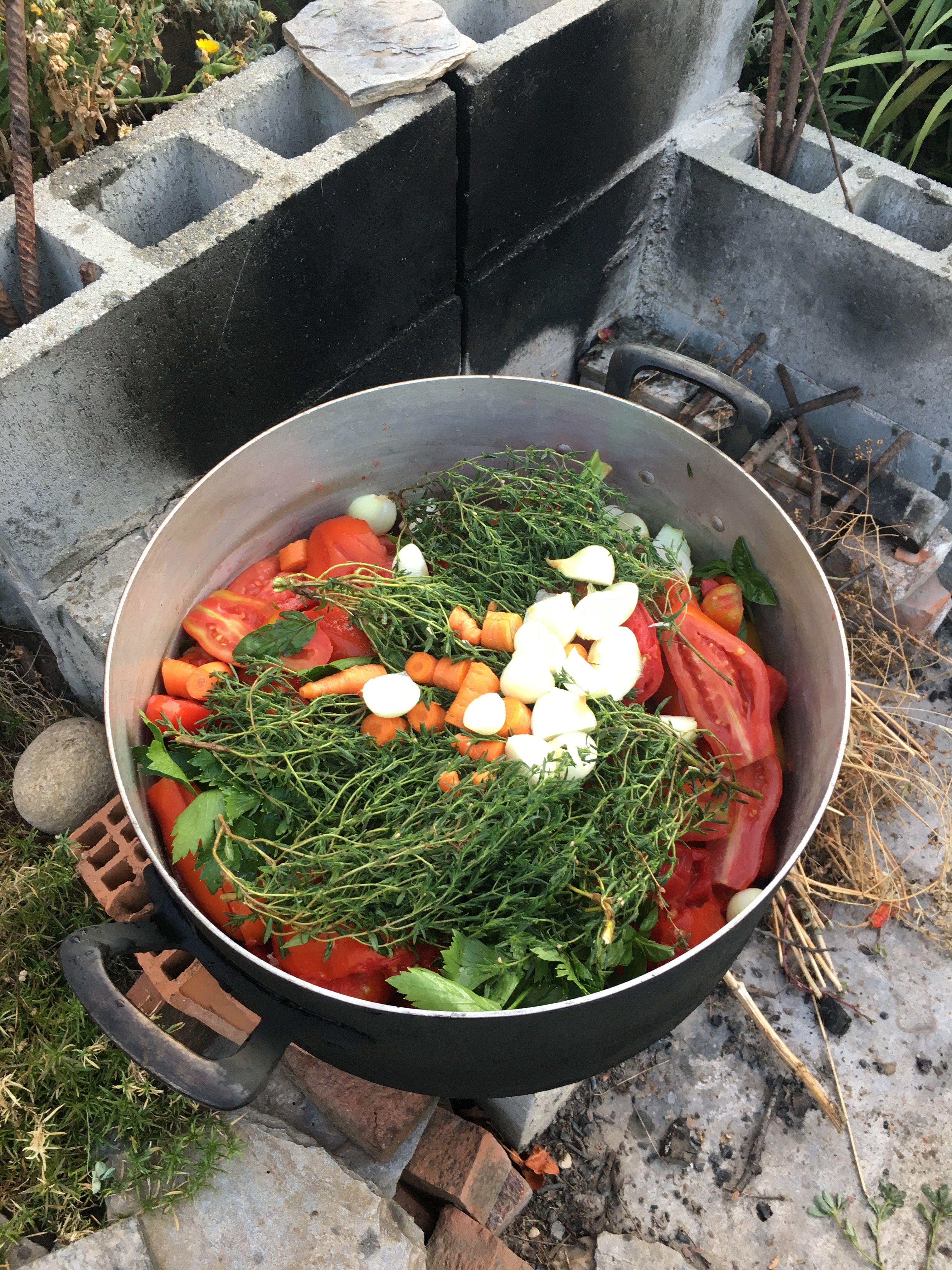 Ready to light the fire. 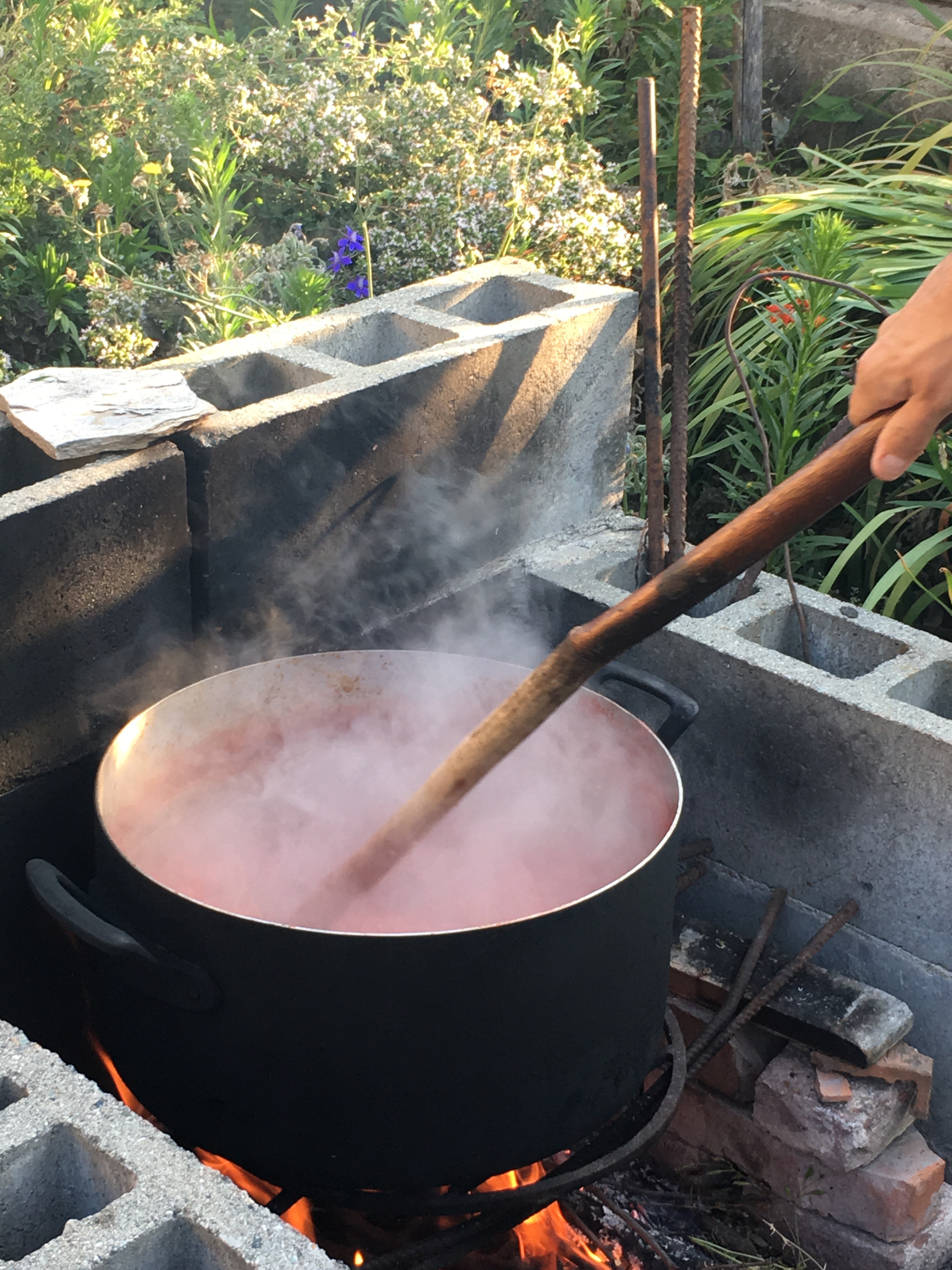 After it starts boiling, it takes about an hour before the conserve is ready to run through the food mill. Everything is from our garden and all the work happens in our garden. We take a bench and attach a hand cranked food mill to the end of it, put a bucket under the spigot, throw some salt in the bucket and get to work. It is a two-person job, I start adding the sauce to the top of the food mill and Mauro starts cranking. 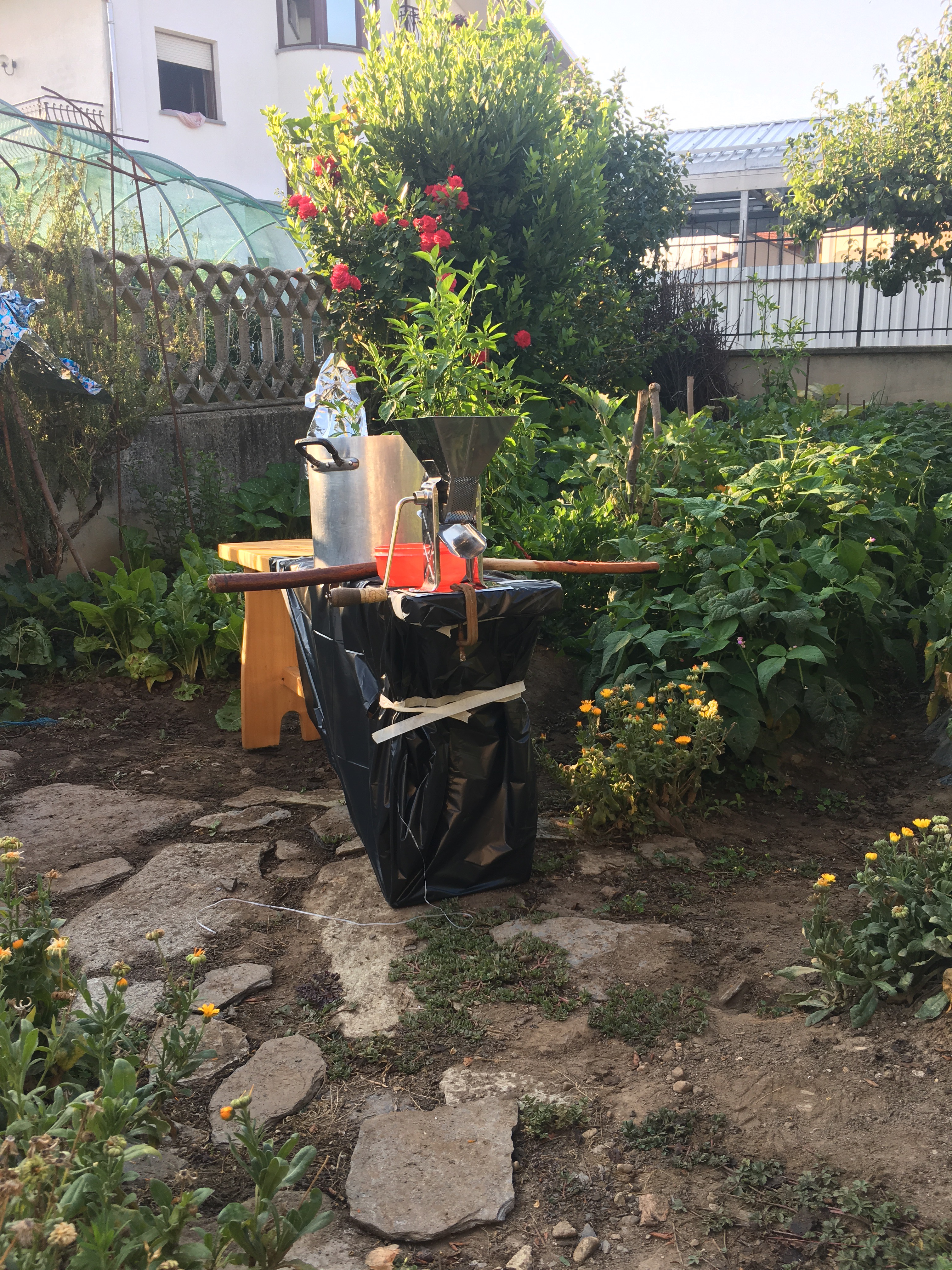 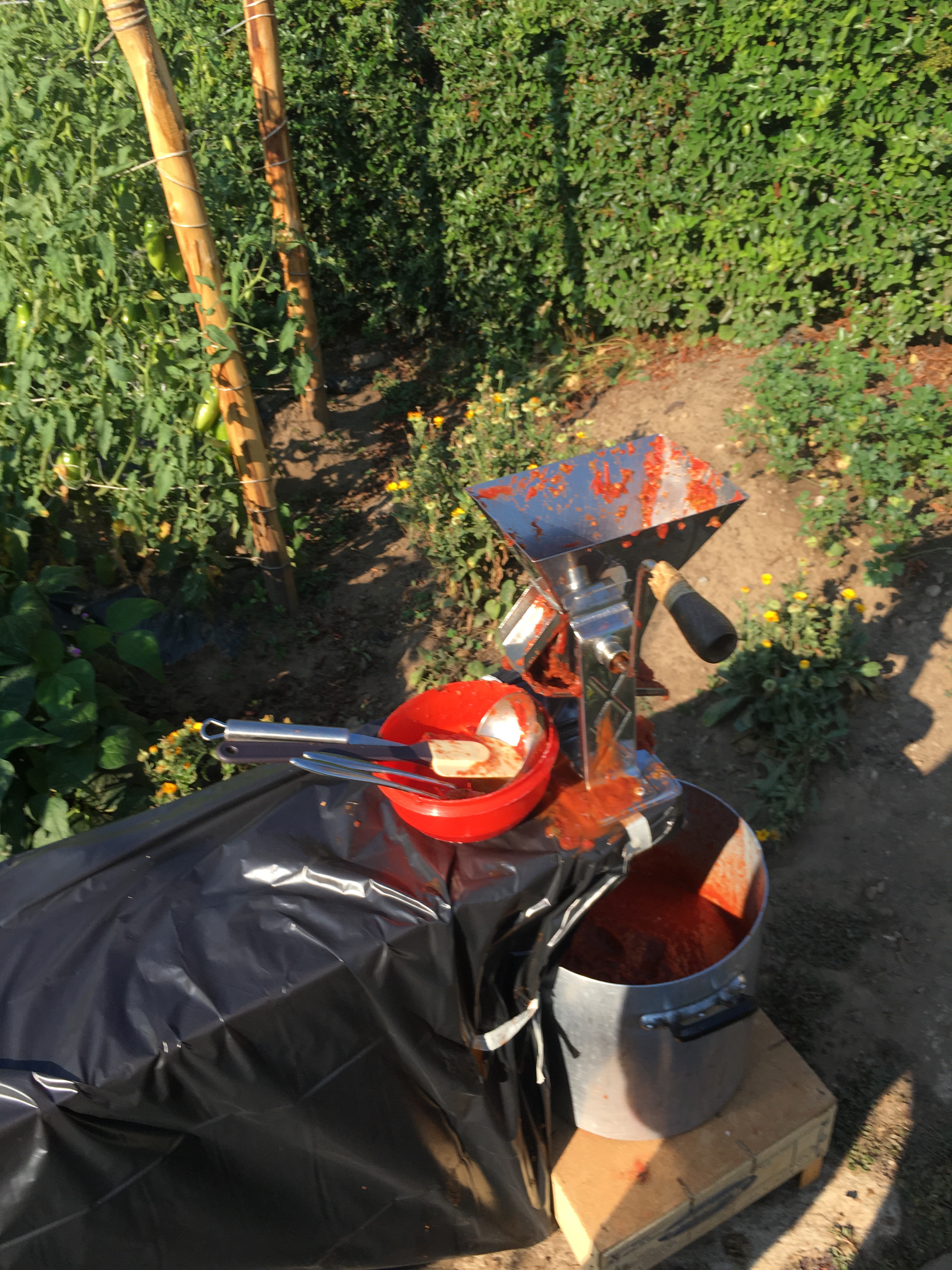 Once I have added enough of the sauce to the food mill, I take a fork and start mashing it down while Mauro continues to crank, and crank, and crank…It is not until there is nothing but seeds and stems left in the top of the food mill that we stop, clean it out, and start again until all of the sauce in the pot goes through the food mill. The pulp that we pull out in between batches is dry and we just put it on the fire to burn.
I usually takes us about 45 minutes and multiple batches to finish a giant pot of conserve. Maria always wanted an electric food mill and every year as I press down on the last bits of pulp in each batch, I remember why.  Mauro always says “push harder, my mamma always said that this is the best part!” My hand is starting to ache… 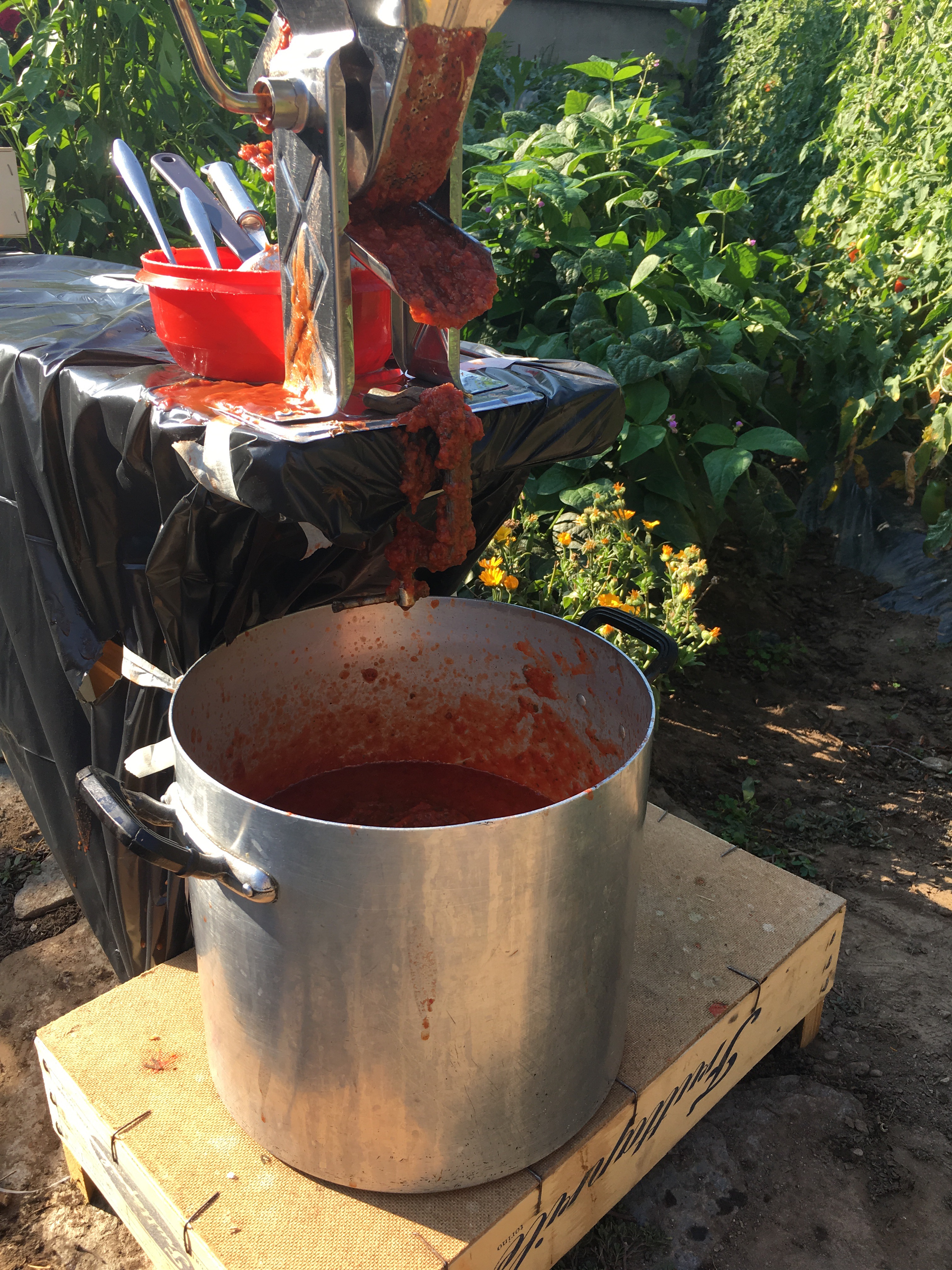 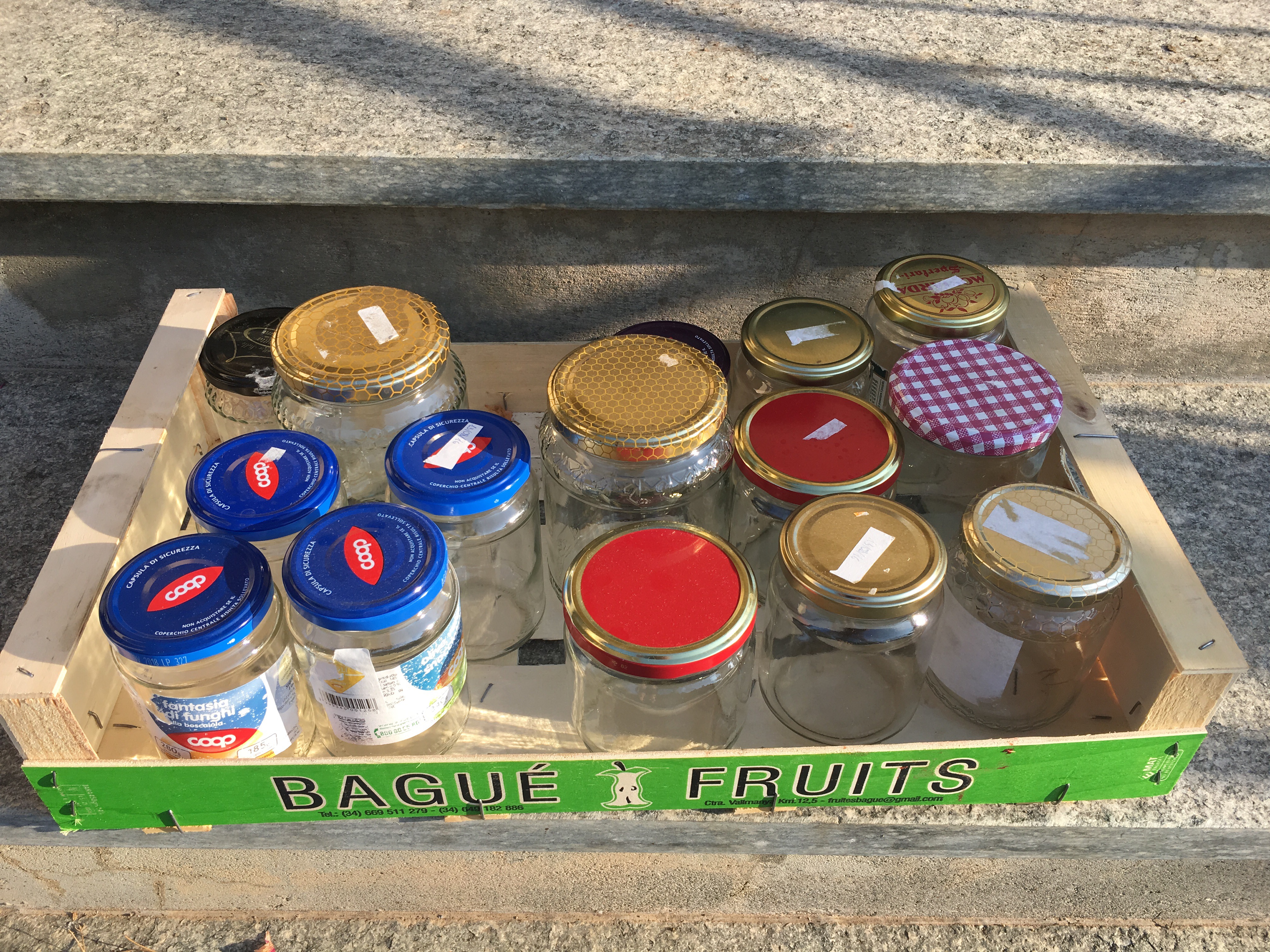 Finished with our conserve, it is time to put it in jars. We do not use special canning jars but have saved various jars during the year to reuse for our conserve. Honey jars work particularly well.  Once the conserve is in the jars, we put them back in the big pot in a water bath, wrap rags around the jars so they do not clank together and break, and light another fire under it. We let them boil for about 20 minutes and voilà, la conserva is perfect!
They conserve tastes wonderful, complex enough thanks to the herbs and veggies that complement the tomatoes.  Cooking it for nearly an hour over the fire softens the acidity of the tomatoes, and gives it a slightly smoky flavor. From this, I will be able to make all sorts of tasty things throughout the year, a basic sauce to which I add more onions and carrots, rosemary, ground beef and/or sausage.  Perfect to dress any pasta or for lasagna.  I use it to make a fish ragu (sauce) with fresh tuna or swordfish, adding olives, capers and more basil.  It is also delicious on a bed of zucchini noodles with poached egg over the top…you get the idea.  It is good for many different recipes 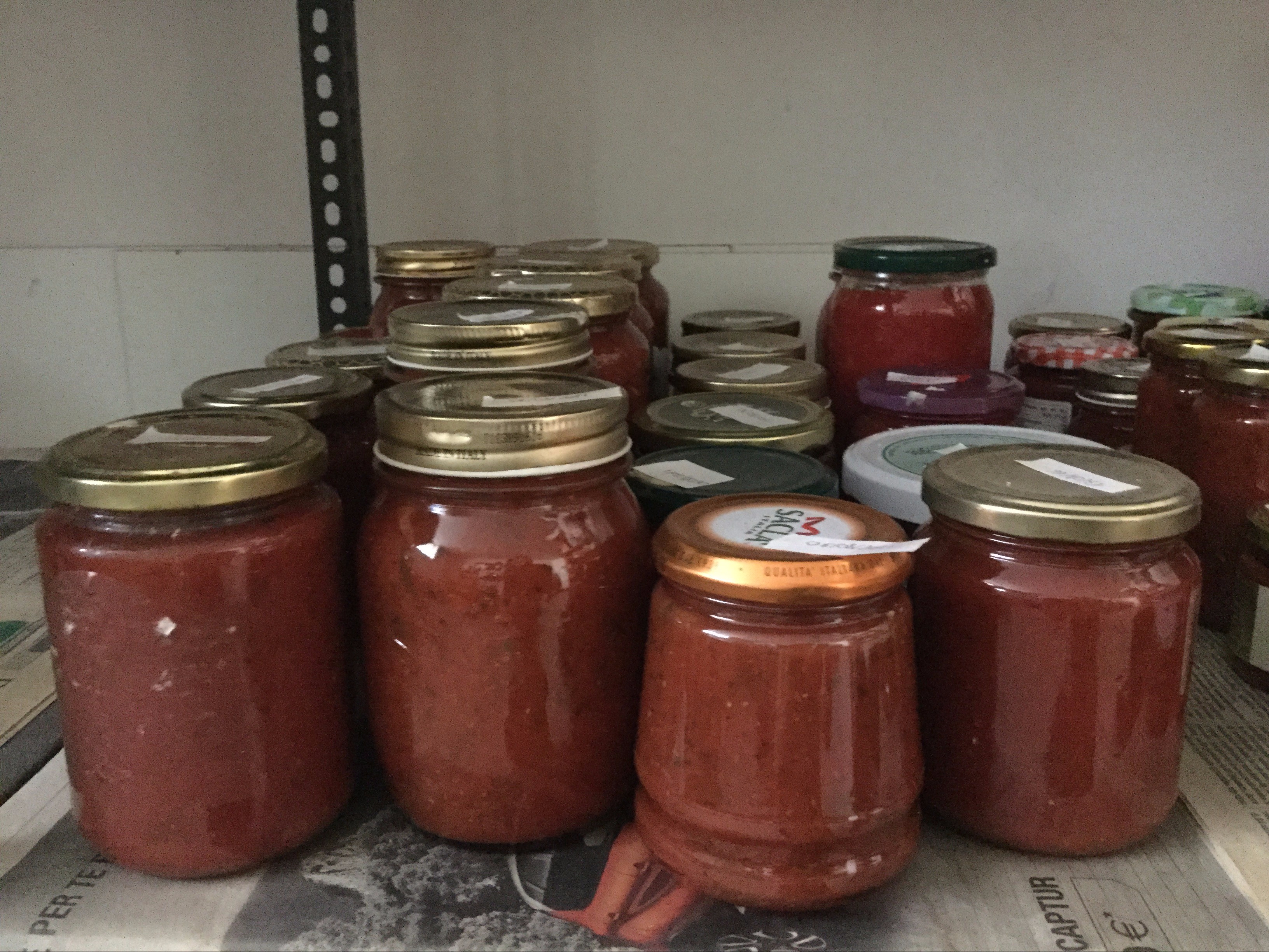 Enough for the year, or so we hope!

,Every batch is a little bit different, we do not use precise measurements, just experience, and hope it comes out well.  Up until now, it always has. During my years of guiding, I have often told this story about making tomato conserve when talking about Italian culture and gestures. Once and only once has one of my tour members ever tried to make our conserve as I described it. When she was done, she sent me an email with pictures from her garden. She told me it was delicious, that it was a lot of work and would only do it again if she had twice as many tomatoes.   She ended up with about 5 jars of  sauce. It is not worth the time for a small batch! If you do ever decide to make your own conserve over an open fire, let me know how you like it. Buon appetito!