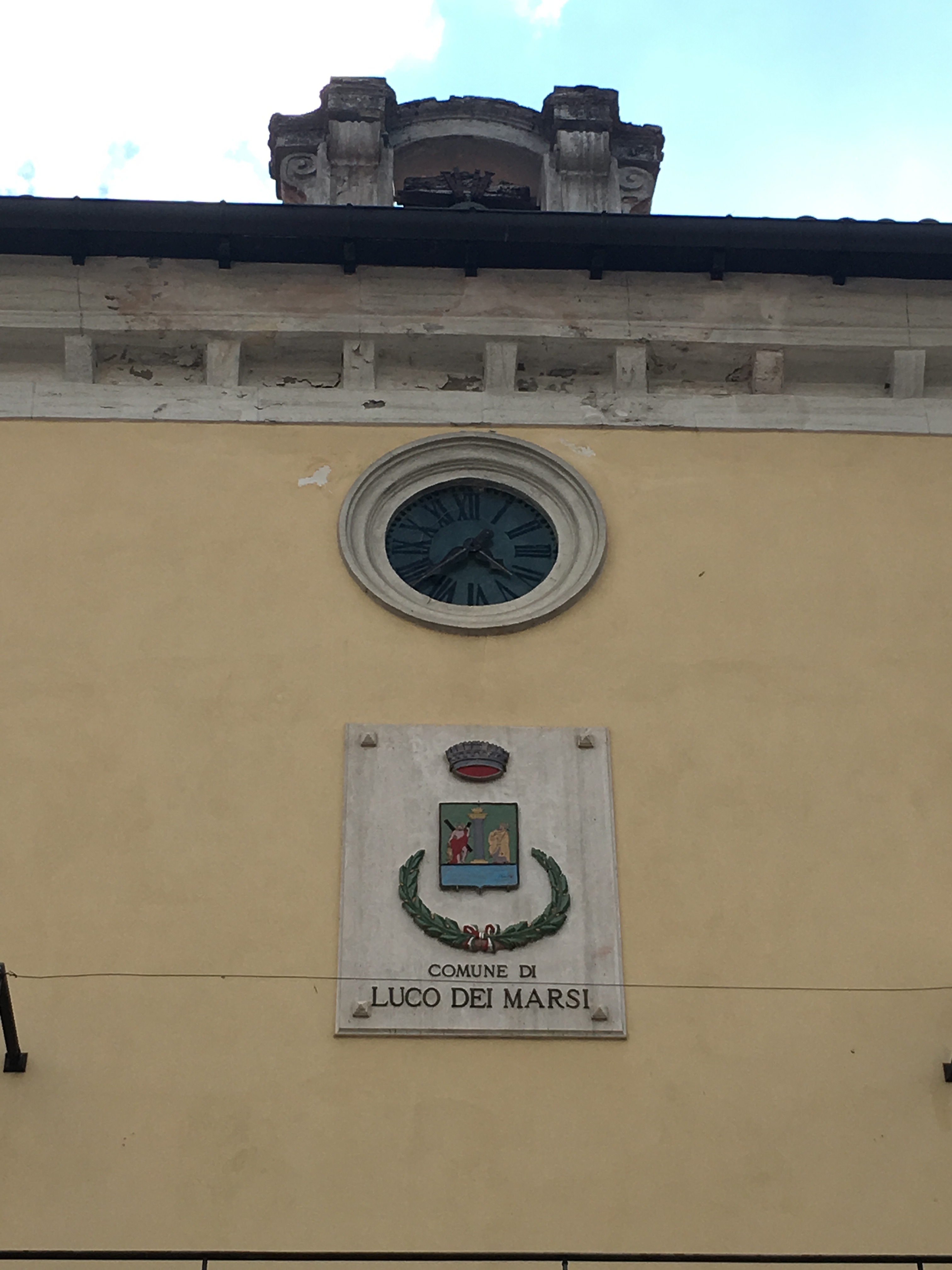 I always joke that I am a good American…I am a mutt.  I am exactly what America is about, the melting pot. My father’s side of the family were colonists prior to the American Revolution and my mom’s family is part of the massive wave of immigration that started after about 1890 and continued well into the 1900’s.  Her grandparents were White Russian on her paternal side and Italian on her maternal side.  I am a mutt… 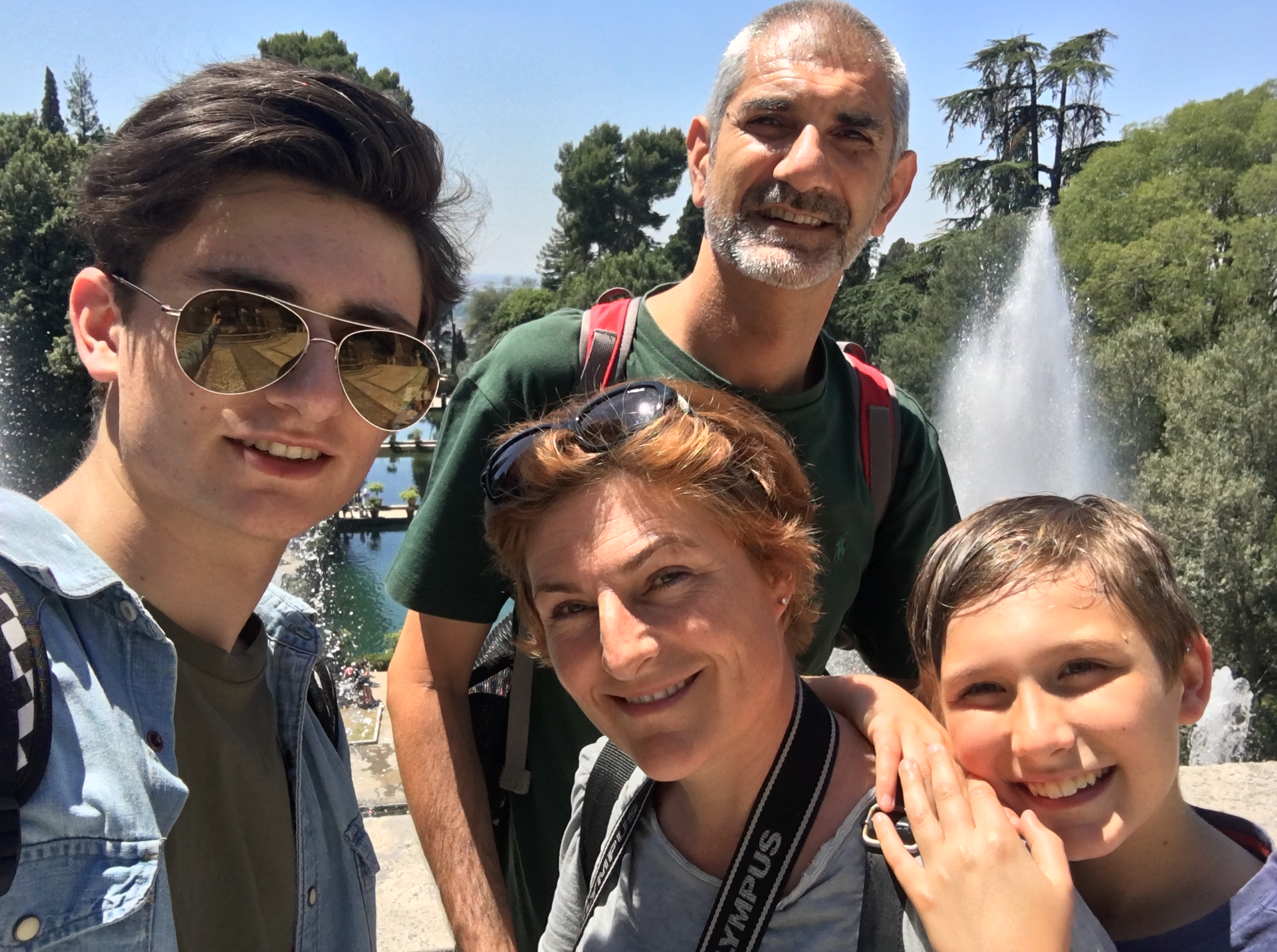 Our family adventure, sightseeing in Tivoli on the way…Villa d’Este

Armed with very little information and a few days off with my family, this mutt decided to go and visit her Italian great grandparents place of birth.  My great grandparents are from Abruzzo so this was also a chance to visit a region I had never been to before.
What I knew going in was that Lucia Pannella and Agostino Bianchi were born in the town of Luco dei Marsi.  Lucia was born in 1881 and we don’t have a birth date for Agostino but it was probably just a few years earlier.  My mom said her grandpa talked about his town being a days walk from Rome.  I imagined this as a 10/12hour walk until I asked Google Maps. Agostino nailed it!  Luco dei Marsi is a 24 hour walk to Rome. 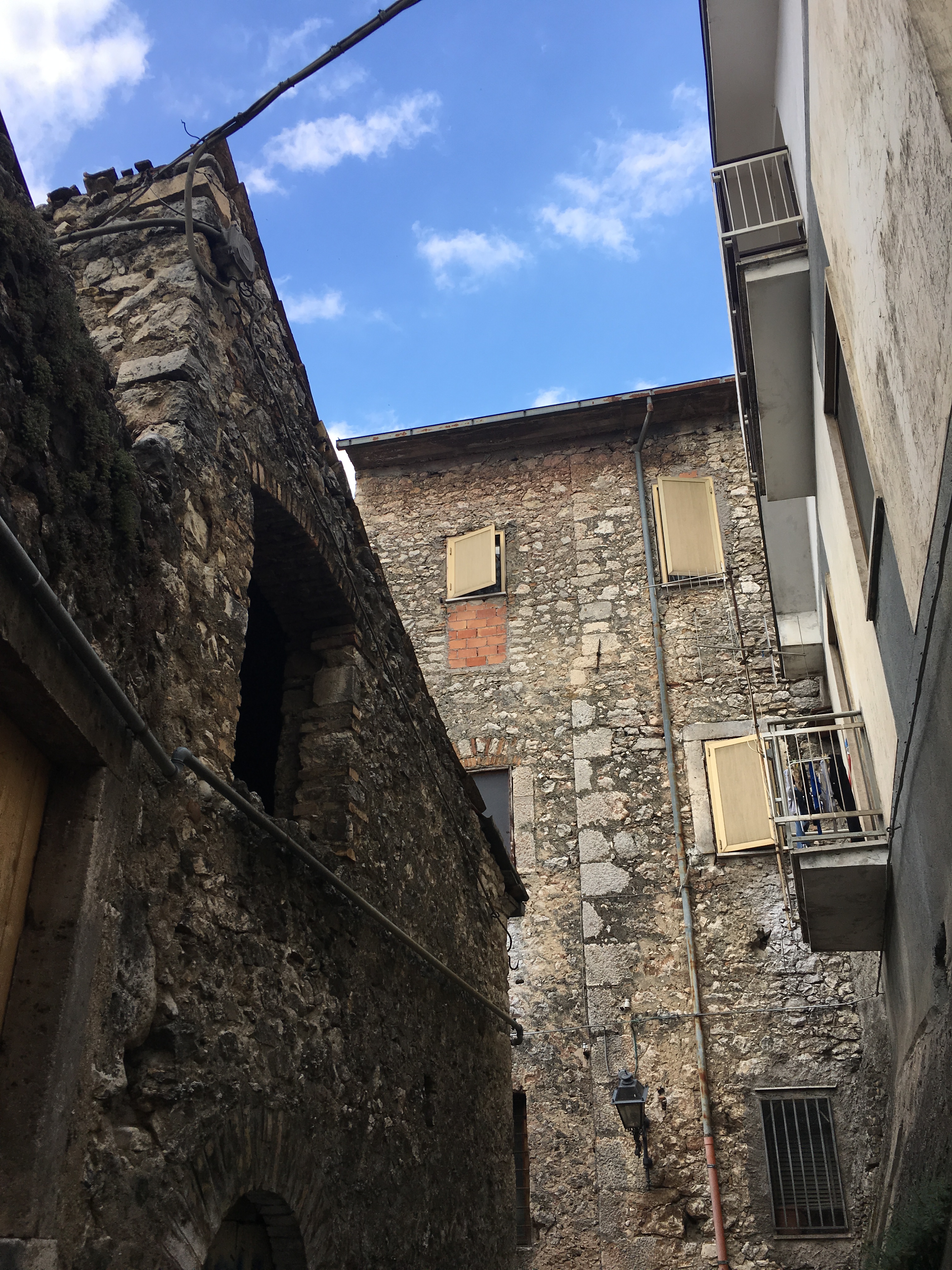 Exploring the town, what is left of a tower…A lot of the building here were given  very unfortunate face-lifts in the 1960’s, these still have some of their original charm.

Not having much information and knowing that we would be visiting Luco dei Marsi on a holiday weekend, I made no effort to contact anyone in the comune, (city hall) and didn’t really know what to expect.  On arriving in town we parked the car and decided to walk to the main piazza.  There was a funeral underway in the church so we cut up a street just behind it with the idea of having a look around, this is where we got lucky. There was a walking tour organized by a local group with an archaeologist underway and they invited us to join the tour. 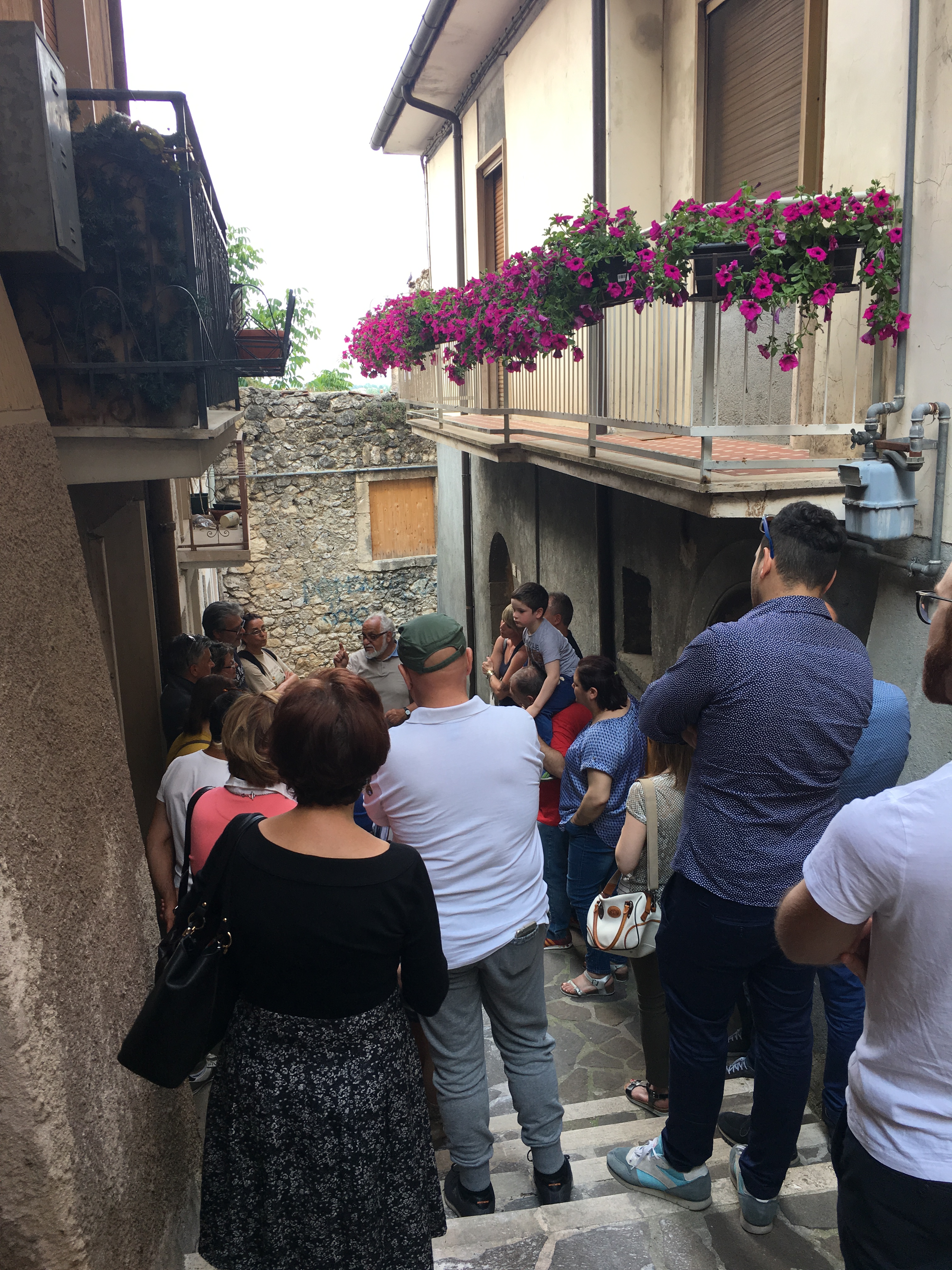 Locals learning about their town.

While we weren’t able to stay and listen to the entire tour, we met some lovely and helpful locals and learned a few things about the area that we didn’t know and that have provided some clues that might help me put together a bit more of my family’s history.  I am now busy studying and if nothing else will glean a bit more about Italy’s very complicated history.
I thought knowing their last names might help but Pannella and Bianchi in the town of Luco dei Marsi is like my last name, Anderson…extremely common.  I met people in town with both last names and it seemed like every third tomb at the cemetery had one of the two names on it and sometimes both.  A few of the people we talked to there asked if we knew the nickname they would have used, like Agostino with the   Red beard, but no, in leaving Luco dei Marsi, they left all of that behind…they were desperately poor and in search of the American Dream. 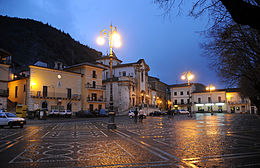 The thing that struck me most about our visit to Luca dei Marsi was the enormity of the journey so many people took in search of a better life. Whether they ended up in Argentina or America.  Luca dei Marsi was not a prosperous place when Lucia and Agostino left and relative to other places in Italy, still isn’t.  I looked up the average income for 2015 and it was a bit less than thirteen thousand euro.  The Italian average was about twenty thousand.
I know how far away from home I sometimes feel and life today is easy in comparison.  I can hop on a plane and be in Seattle within a day of leaving, I can easily phone or write when I want to talk with someone, and instant messaging is just that.  If the person on the other end of the message is paying attention, I can have an answer immediately.  The difference in the speed with which we communicate today compared to when I arrived twenty years ago is enormous and it’s difficult to wrap my head around the challenges my great grandparents faced. The physical journey, walking, crossing the Atlantic by ship and arriving at Ellis Island with hoards of other people. Not speaking the language and crossing the U.S. by train…finding a job, a home and raising a family: my mom said her grandpa ended up working as a janitor in a Seattle bar. We know he spent some time in jail during prohibition for bootlegging but the story is that he was paid to serve time for his boss.  It was a means of supporting his family.
What a life! Did Lucia and Agostino find the American dream? I think they did, kind of. They never became rich or even middle class, but their children did.  My grandma was the baby in the family and when she was born, her mom didn’t have milk to nurse her.  The doctor said to get a goat, so they did.  They had a garden too which helped provide some food but they didn’t have much, so little in fact that my grandma never really learned to cook until her sister married into a middle class Italian family.  Lucia and Agostino didn’t learn much English but insisted that their kids speak only English.  Aside from a few words of dialect, my grandma and  her three siblings never learned Italian.   They all finished high school too, education was important but the idea of going to university was still beyond them, out of reach.  When my mother-in-law, Maria, met my grandpa (Russian parents but similar socioeconomic background), she was amazed by the fact that he had a high school diploma.  Growing up in a poor family in Italy, she was thrilled and proud to have a fifth grade education, spoke mostly dialect and insisted that her kids (yes, my husband and his sister) spoke Italian, not Piemontese, at home.  I find the parallels interesting. 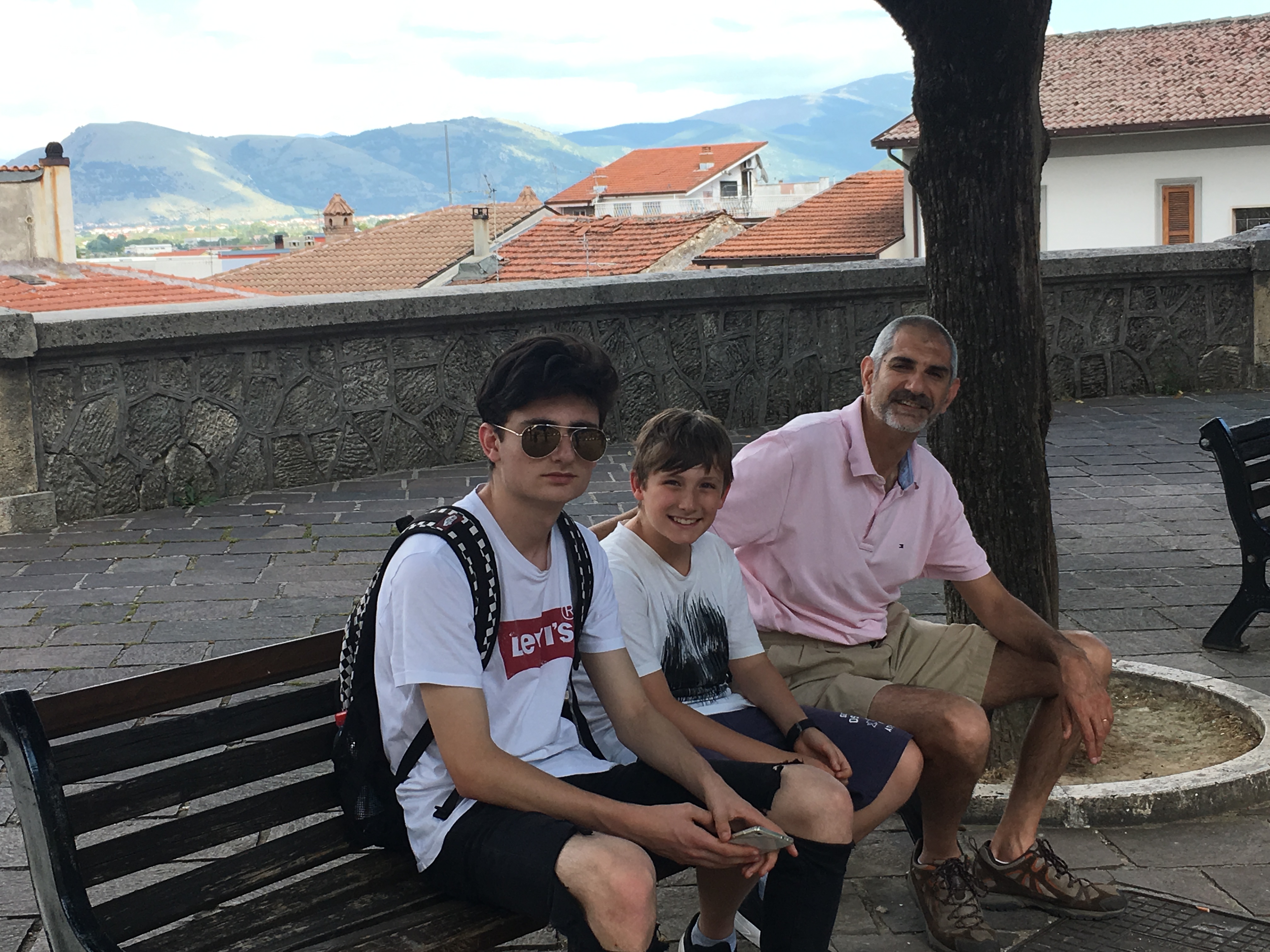 Sitting on a bench in the main piazza, what you don’t see here is how much we stuck out.  Feeling so conspicuous, very few pictures were taken.

This is all I really know at this point but I am going to try to find out more.  A longer trip to Abruzzo and some time digging around for the records at Ellis Island may or may not yield results.  Looking forward to yet another adventure that is just about to begin. Wish me luck!