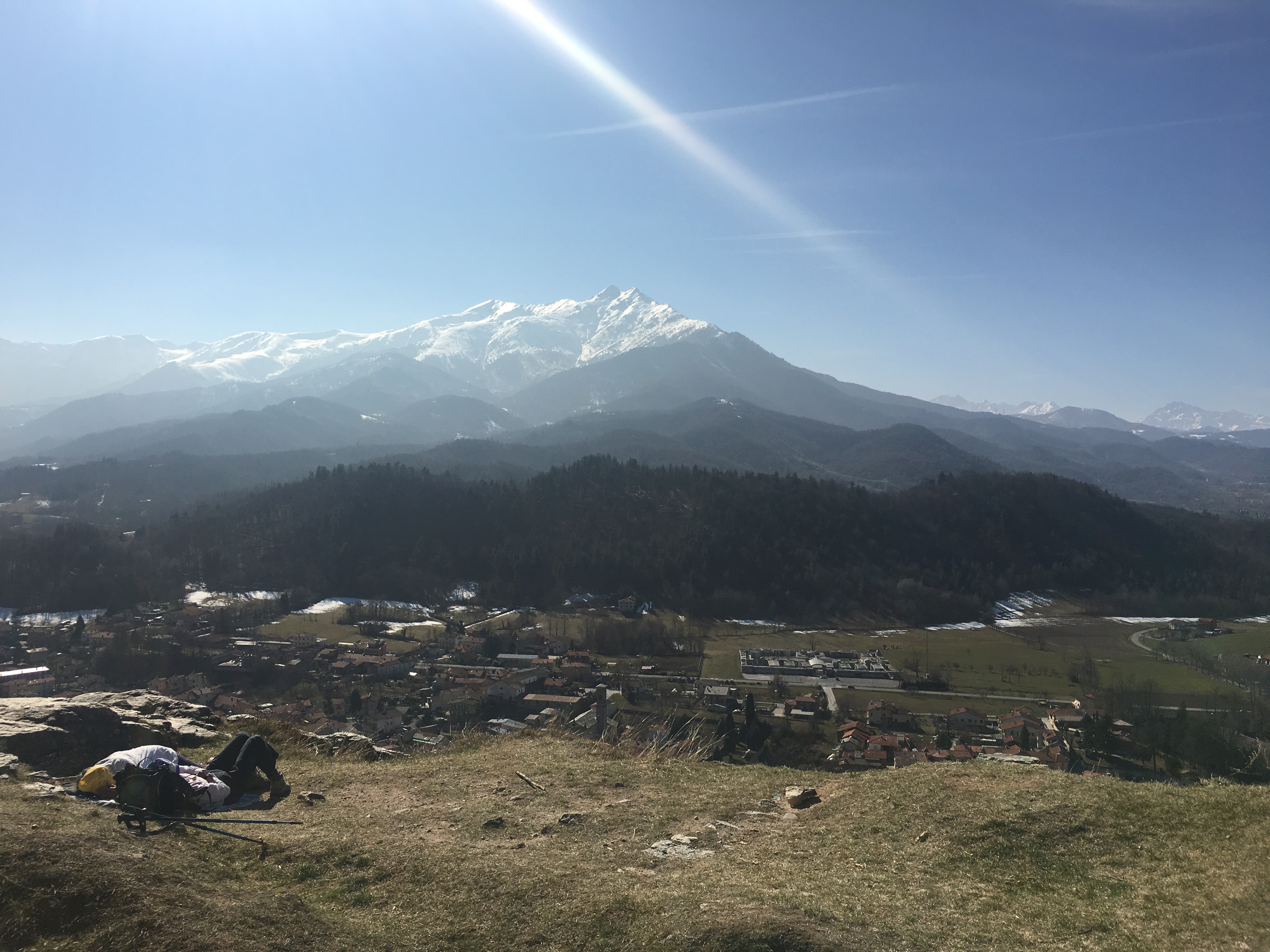 Sunday is the only day of the week that is completely free since the kids are in school Monday through Saturday and even then, there is usually homework to be done.  Needless to say, weekend escapes are pretty much impossible during the school year.  Fortunately we have some great places to escape close to home, one of which we visited last Sunday.
Piemonte literally translates to “foot of the mountains.” Piedi = foot and monte..you get it! The Maritime Alps that divide the region of Piemonte from Liguria are visibile from our home and the Occidental Alps that divide Italy and France are within spitting distance too. Walking a few minutes out into the countryside in the right direction, we see them too. 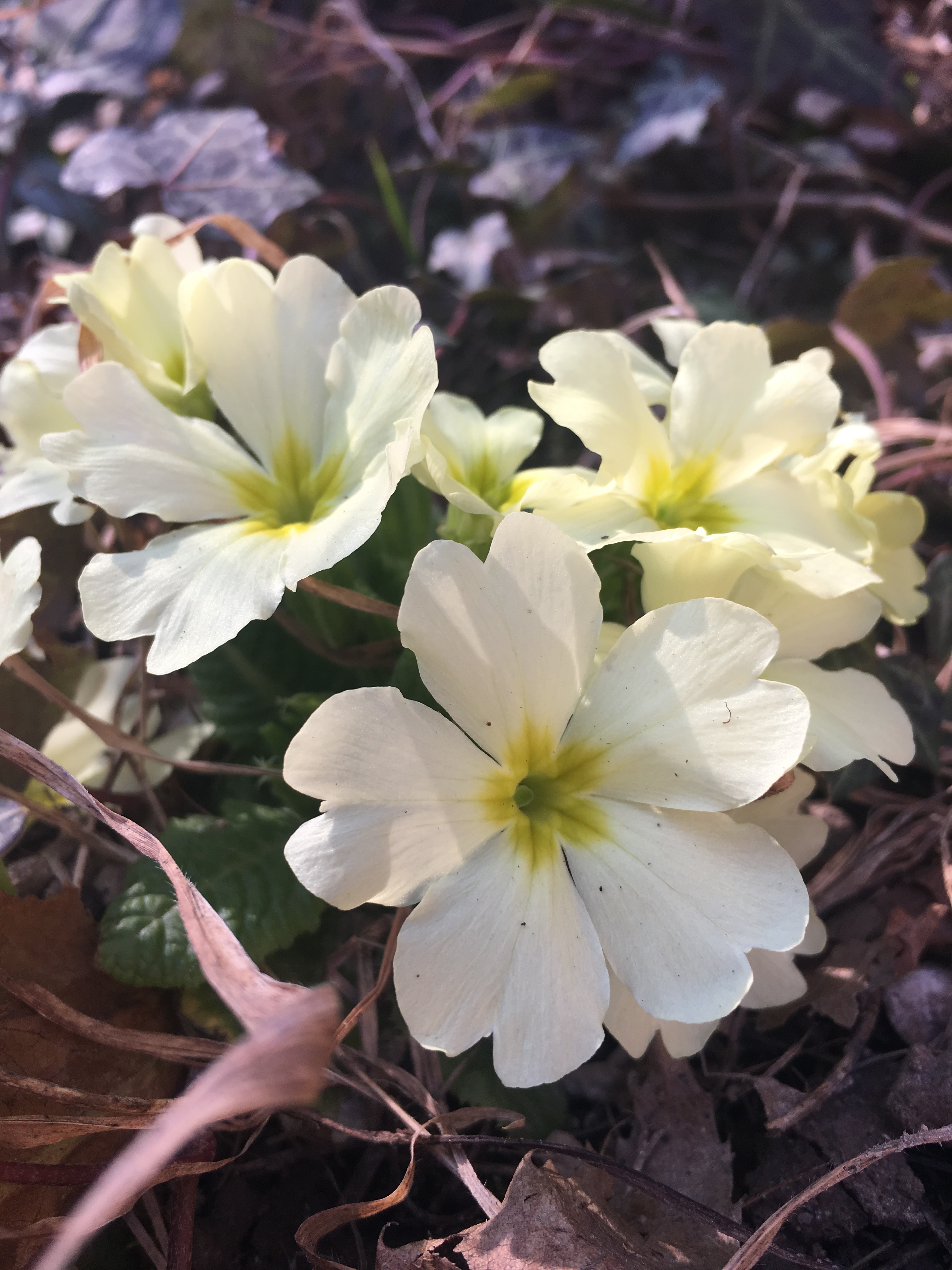 Wild Primrose…spring is on the way.

Last Sunday felt like spring and we wanted to take a short afternoon hike but one look at the mountains tells us it’s not spring yet,  There is still lots of snow in some of our favorite places and lacking snow shoes, or the desire to rent them, we decided to pick something closer to home, lower but still  mountainous.  Chiusa Pesio is a small town that acts as a gateway to the mountains with a ruined castle, Castel Rut, on the flank of Mount Cavanero.  It  gives us sweeping views near and far.  On Sunday we could see the beautiful Bisalta, just across the valley.  Farther afield across the plains, Mt. Viso, at 12,601 feet, majestically guards the French Border and is the source of the Po River that flows across the top Italy and drains into the Adriatic to the south of Venice. 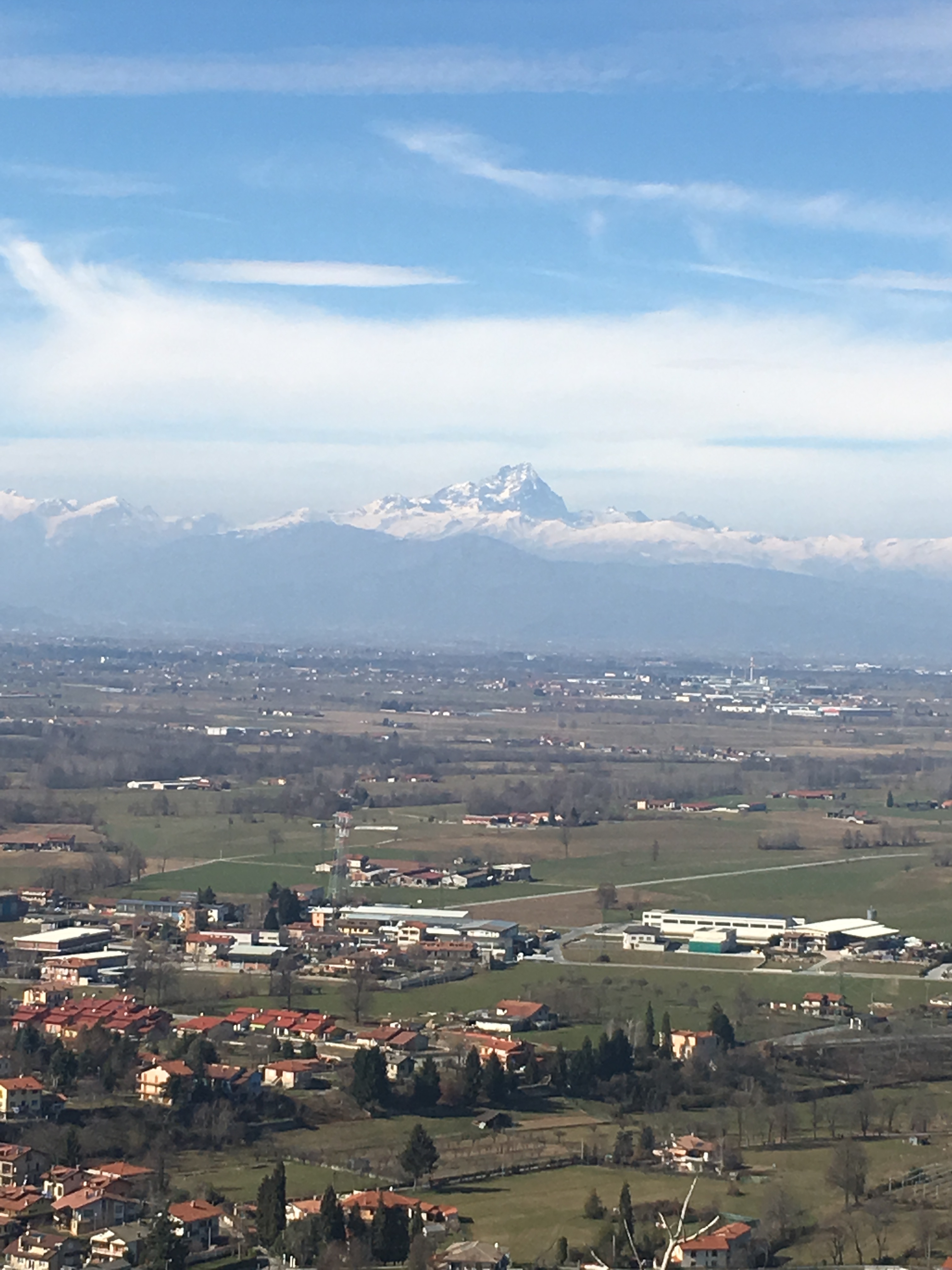 We know from archaeological evidence that there have been people living near the castle long before it was ever conceived.  The earliest remains date back to the XI century B.C. so this was certainly a desirable place to live.  An abundant water supply, easy access to the plains, (domestication of plants and animals was rapidly diffusing) surrounding forests that could supple wild plants and game, and a great view so you could see your enemies coming.
The ancient  Romans settled here too.  Historians think it was manned by legionnaires controlling traffic on the roads coming over the Maritime Alps from Liguria.  They found 18 funerary urns still containing ash and bone fragments, lots of Roman coins and a stone carving dedicated to Diana, goddess of the hunt.
The Castle’s name when built was Mirabello, but Castel Rut is the local name. It means broken castle, very praticale. It was built by the last Marquis of Ceva and fuedal lord of Ceva, Agamennone III, between 1569-1583.  Never heard of him?  Don’t worry, this is local history and while it affected the locals back in the day, only the elementary school students in Chiusa Pesio learn this history.  Two towns over…no!
At some point during it’s history the castle was abandoned and between storms, and a strong earthquake in 1887 not much remained.  One of it’s last standing walls was damaged by the Germans in 1943 as their colonel fired cannons in an attempt to scare the residents in the town below. 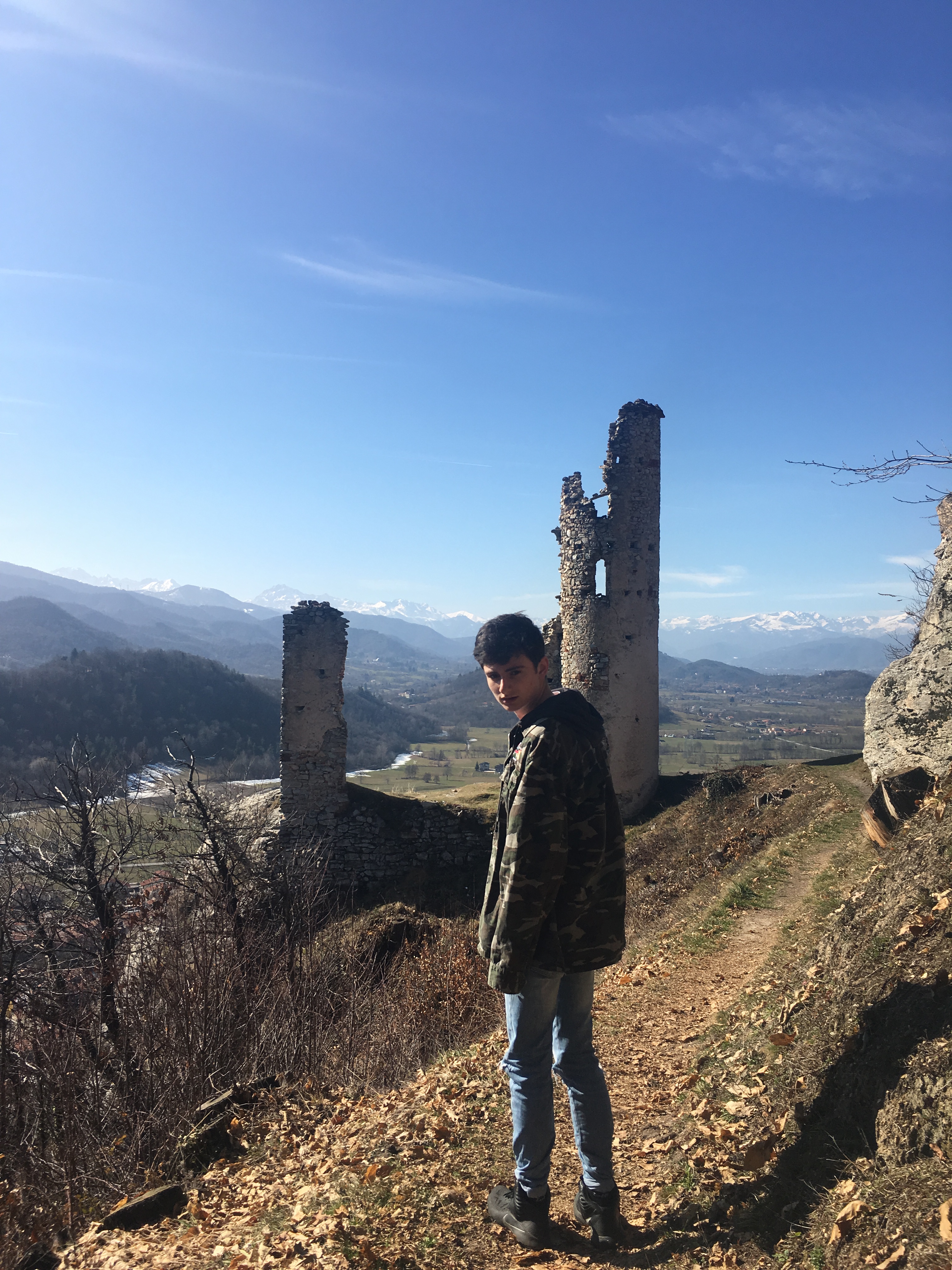 There are also some ruins of an old Borgo (a group of houses) that haven’t been abandoned all that long…maybe 100 years ago?   One of the buildings has been worked on relatively recently >20 years, but the restructuring stopped.  Who knows  if the money ran out or perhaps it was being done abusively and the owners were forced to stop.  Most of the land up here is privately owned and easements allow public access.   At the corner of one of these old houses are trail markers. 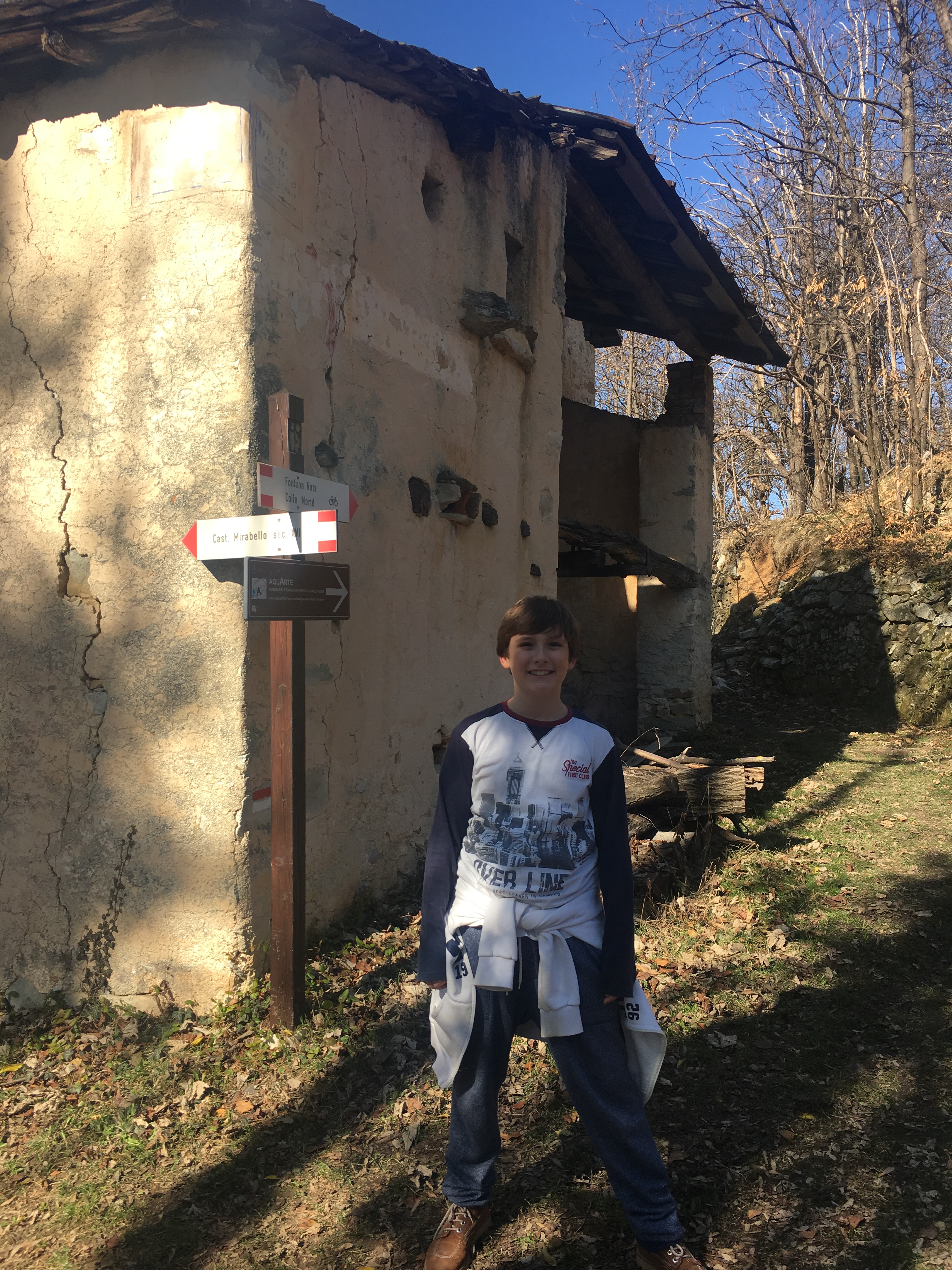 Emanuele, which way shall we go? 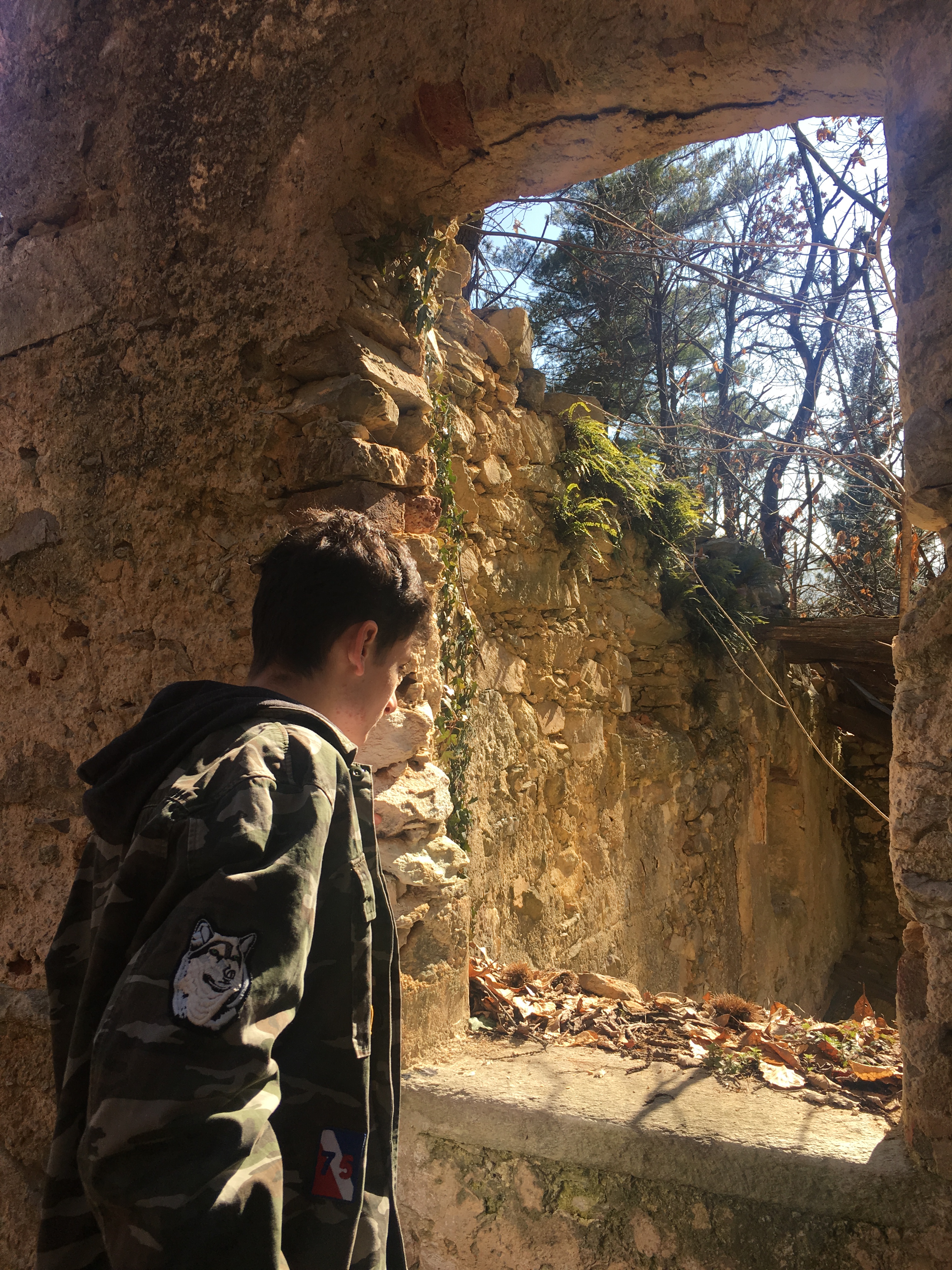 What we love most about days like these is taking everything at a leisurely pace and taking a good look around.  Filippo likes poking around and snapping pictures for his Instagram page, Ippostyle.  He has a good eye and a great sense of style and I hang back with him. Emanuele and Mauro are already at the ruins by the time we get there and Emi calls me over to share their discoveries…see the pictures below. 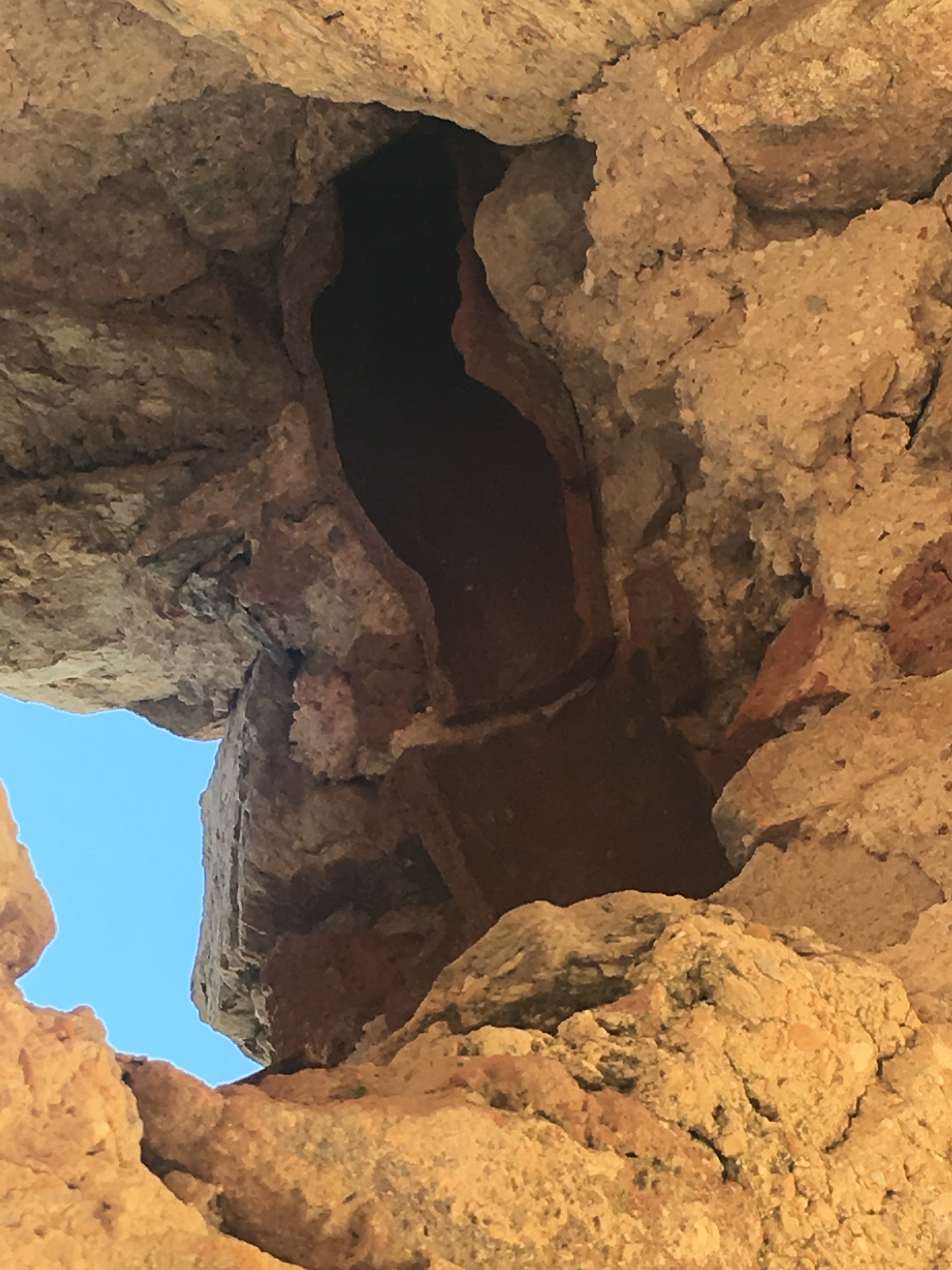 Drainage…a terracotta tube ran through the walls of the tower and exited at the base (not visible). 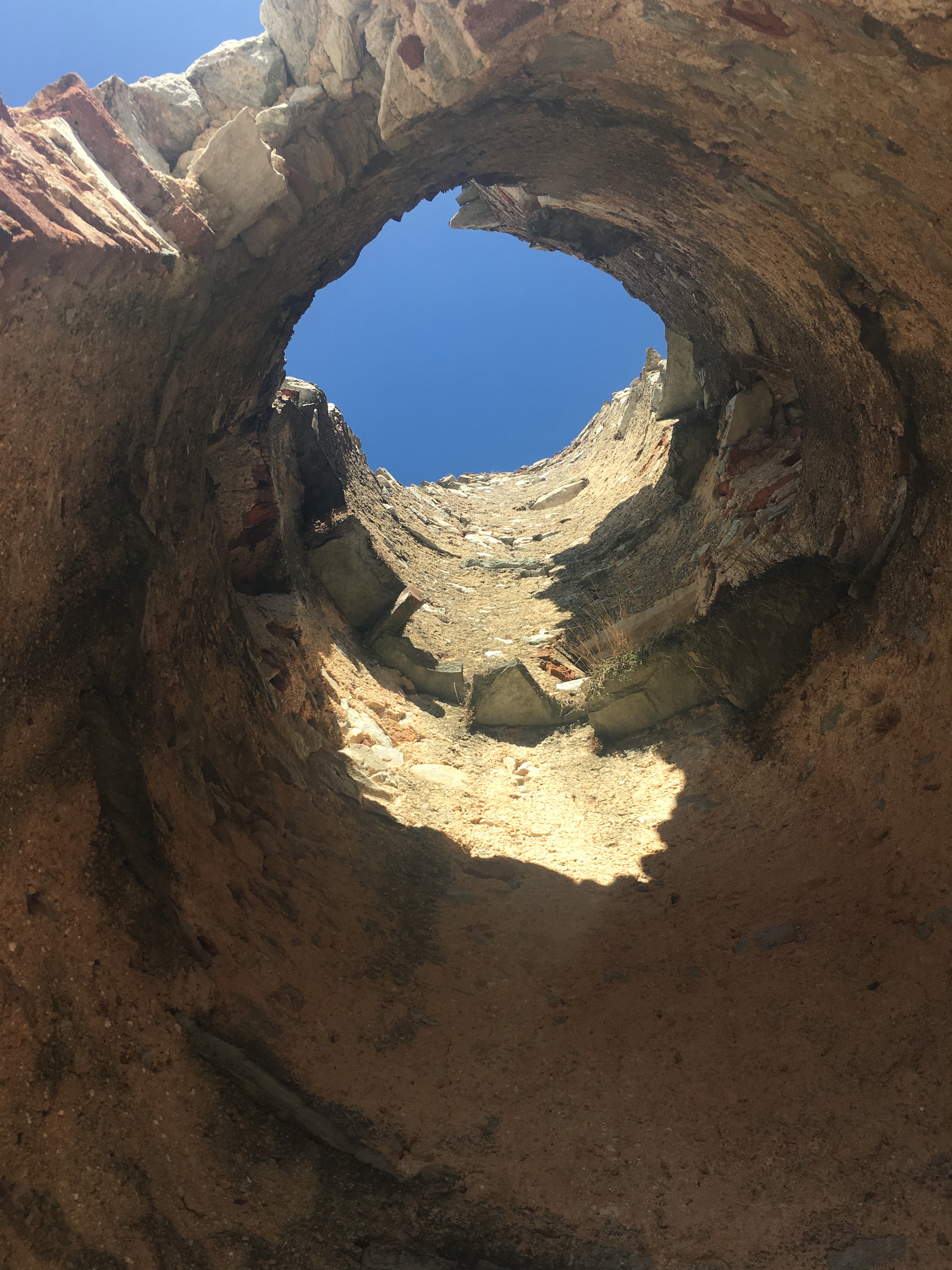 Looking up you can see where the stairs used to run up the tower.

Once we have taken in the view we decide to continue our walk into the woods.  There is supposed to be a fountain nearby but it’s not well marked and we take the wrong path at a fork in the road.  We never found the fountain…What we do find is peace in a forest dominated by chestnut trees that inhabitants here have eaten as a staple for thousands of years.  If we are lucky we’ll come back here in a few months and finds Porcini mushrooms and Chanterelles popping up through the leaf litter.  The last couple of years have not been good for mushrooming so we are due! 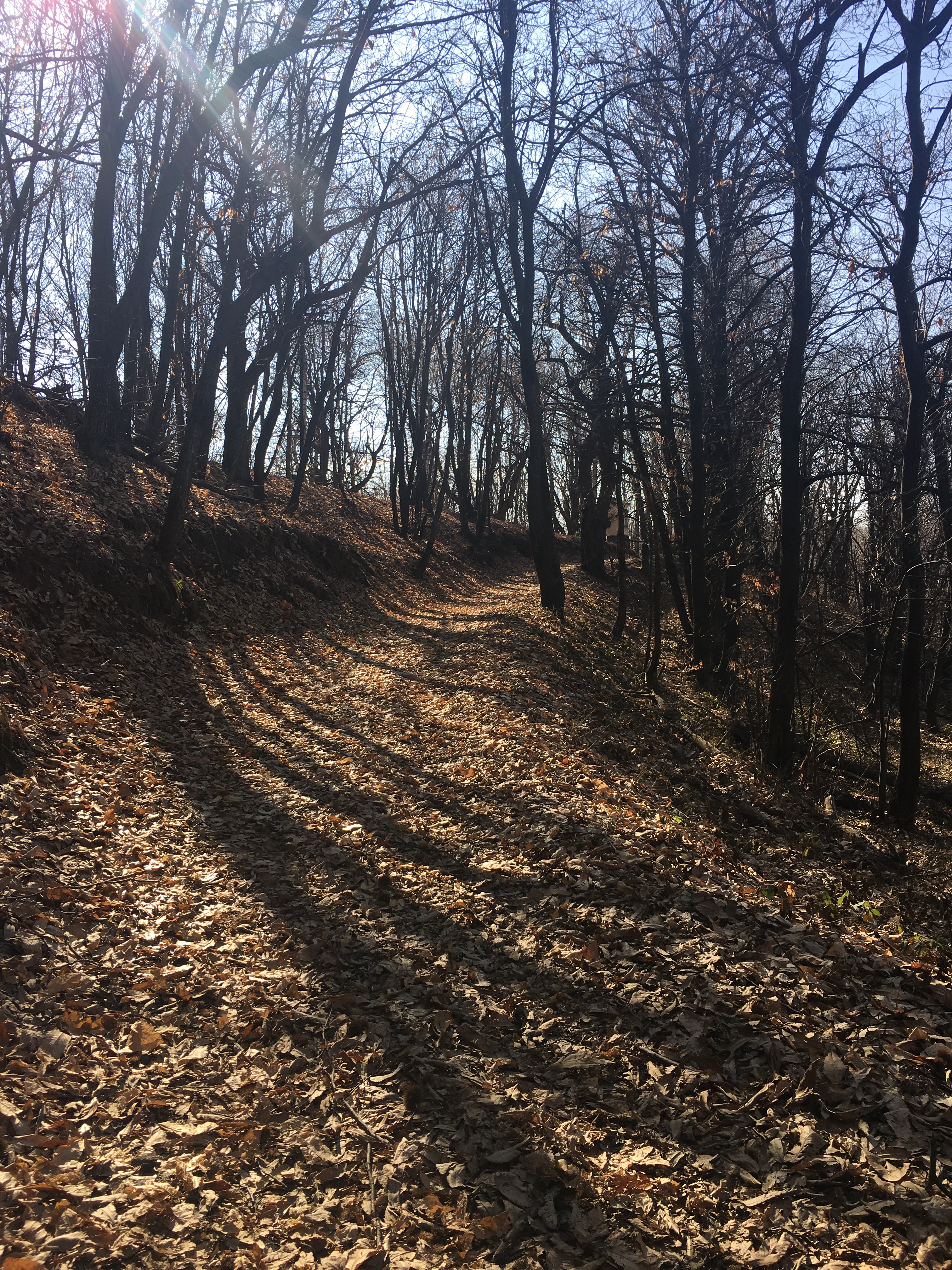 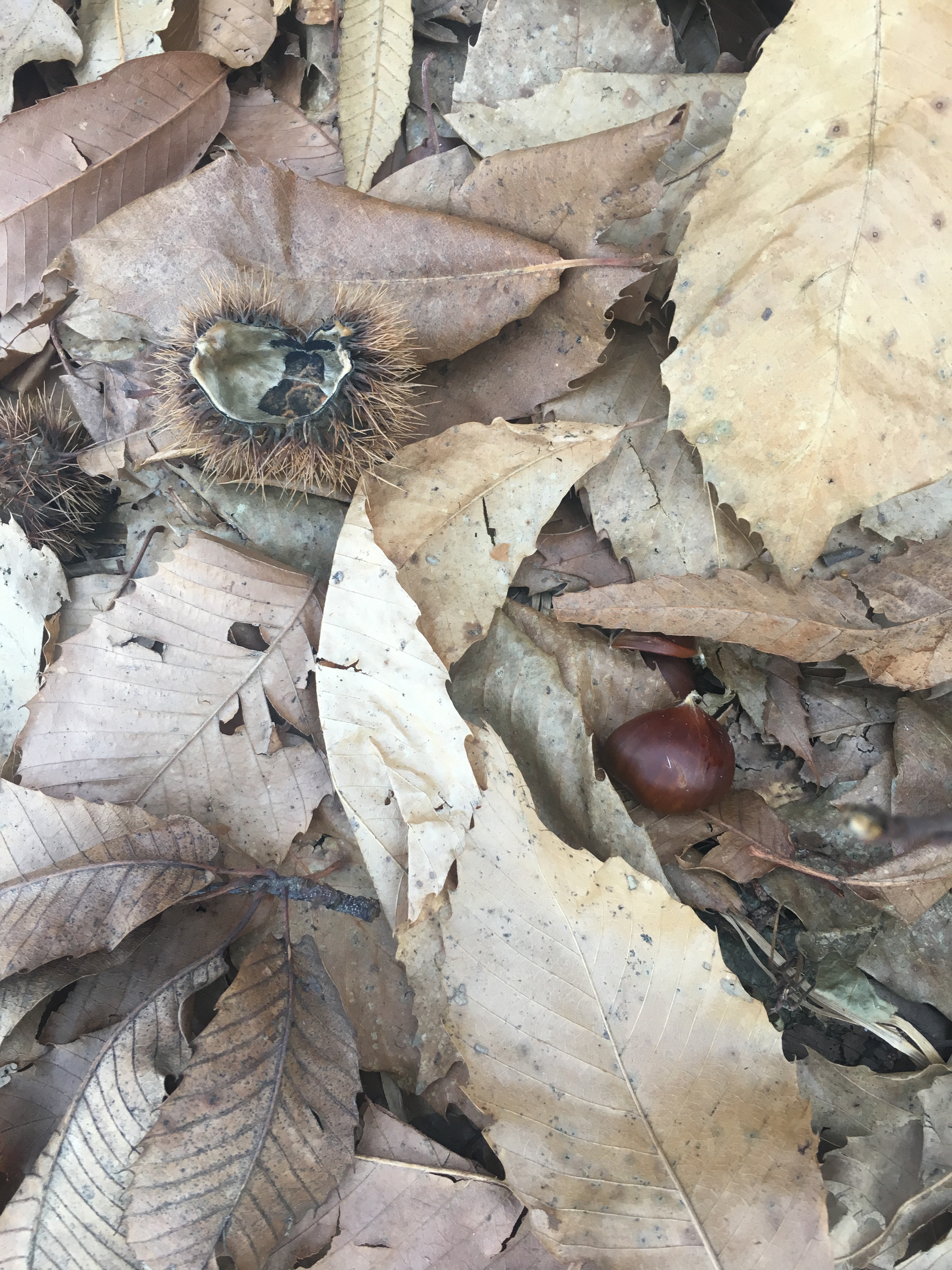 We end up making a partial loop around the top of the mountain before heading back down the way we came.  We have meandered for the better part of 2 hours since leaving home.  Just enough to stretch our legs and breath a little fresh air…a perfect mini Sunday escape.