The last two weeks have been busy as my fall tour season kicked off on a tour of South Italy with Rick Steves Europe, the company that has kept me happily employed for the last 17 years.  Until mid November I will be living out of a suitcase  with a few quick trips home.  Tour life is busy and intense and the hours can be long. I love it and am exhausted after having said goodbye to a great group of travelers in Naples yesterday and making my way by train to Padova. I have un giorno di riposo, one day to enjoy by myself before starting a new tour tomorrow. I am spoiled by the fact that I live here in Italy. Because I don’t have to take an international flight home I usually have the luxury of spending at least a week in my own bed between tours. It has worked well for my family over the years. After a couple of weeks on tour I miss my boys.  Filippo is almost 15, Emanuele is 9 and my husband, Mauro, is the adult in our family. He is about 6 weeks older than I am.  Who’s a lucky girl! 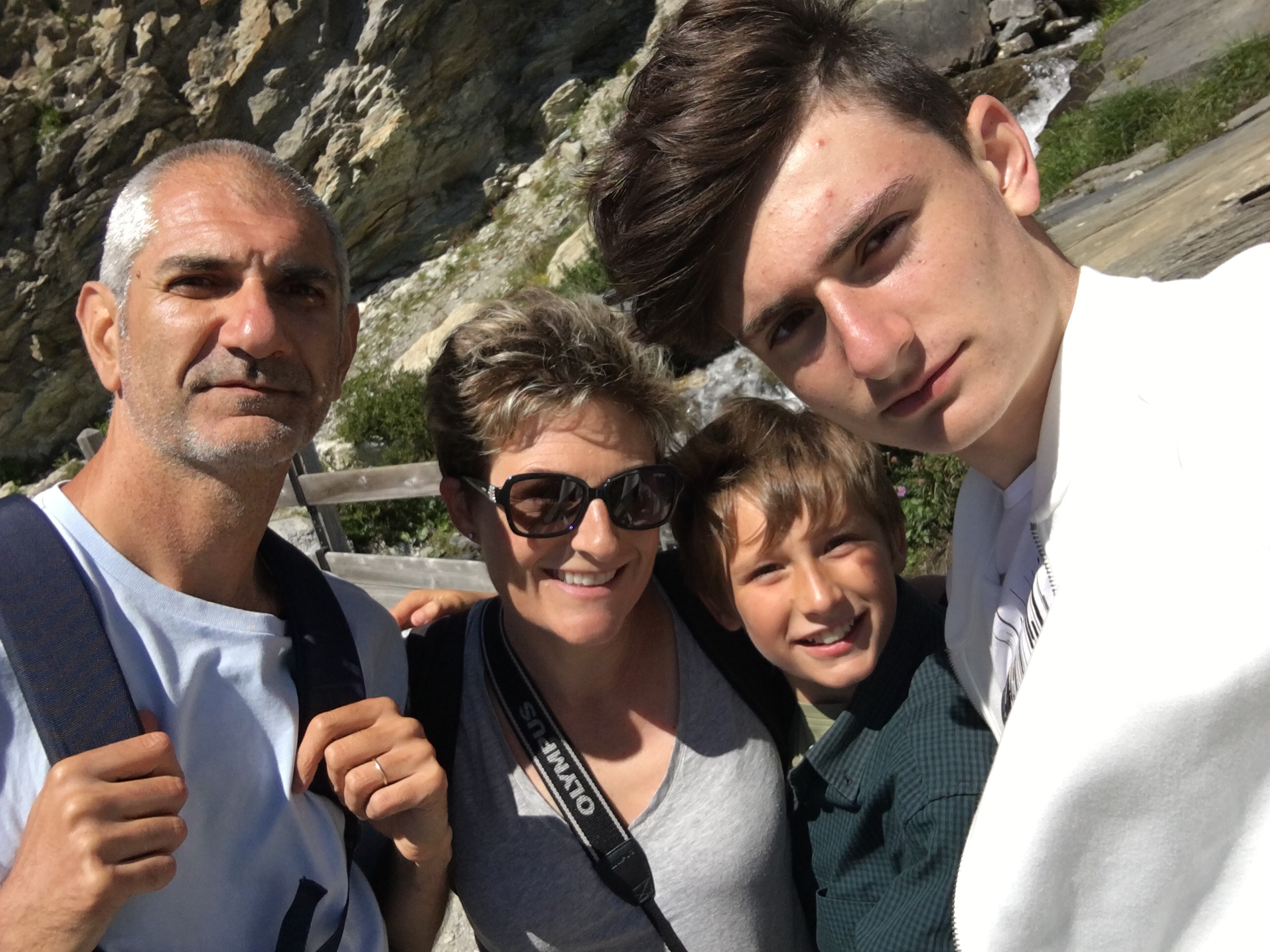 Summer hiking in Val d’Aosta with my boys.

Since I only have one day between tours this time Mauro and I decided it was best I not come home. This might sound strange to some people but we have learned from experience, (fortuately not too often) that coming home for just a few days is disruptive and makes the next trip harder. Mauro is in his sometimes single parent groove, managing the house, his job and the kids…and it works. With only one day off between tours, it works for me too. I have to finish my accounting and get ready for my next tour. I managed to get my laundry done last night. Just in time, I had nothing clean left to wear!  I am also playing tourist today with some of my free hours…here’s what I decided to do.
My next tour starts in Padova which is a short hop from Venice but I will be back in Venice next month so today I decided on a side trip to Vicenza. The last time I was here was in 2000, time flies! Vicenza is about 20 minutes by train from Padova and there are usually 2 trains every hour.  This is the land of buildings designed by architect Andrea Palladio and I wanted to revisit his Teatro Olimpico among other things.
The Olympic Theatre is the oldest of three remaining theatres built during the Renaissance and greatly inspired the other two. It was the last building designed by Palladio in 1580 and construction had barely begun when he died so while the drawings used in designing the theatre were his, the execution of Palladio’s design is heavily attributed to the architect who took over, Vicenzo Scamozzi.  He designed the entrance to the theatre, an arched gate that leads into a courtyard. It reflected the triumphal arch found at the center of the the stage but rusticated to fit into a well worn medieval wall. The idea was to transport people from their medieval surroundings into a classical world before they entered the theatre. 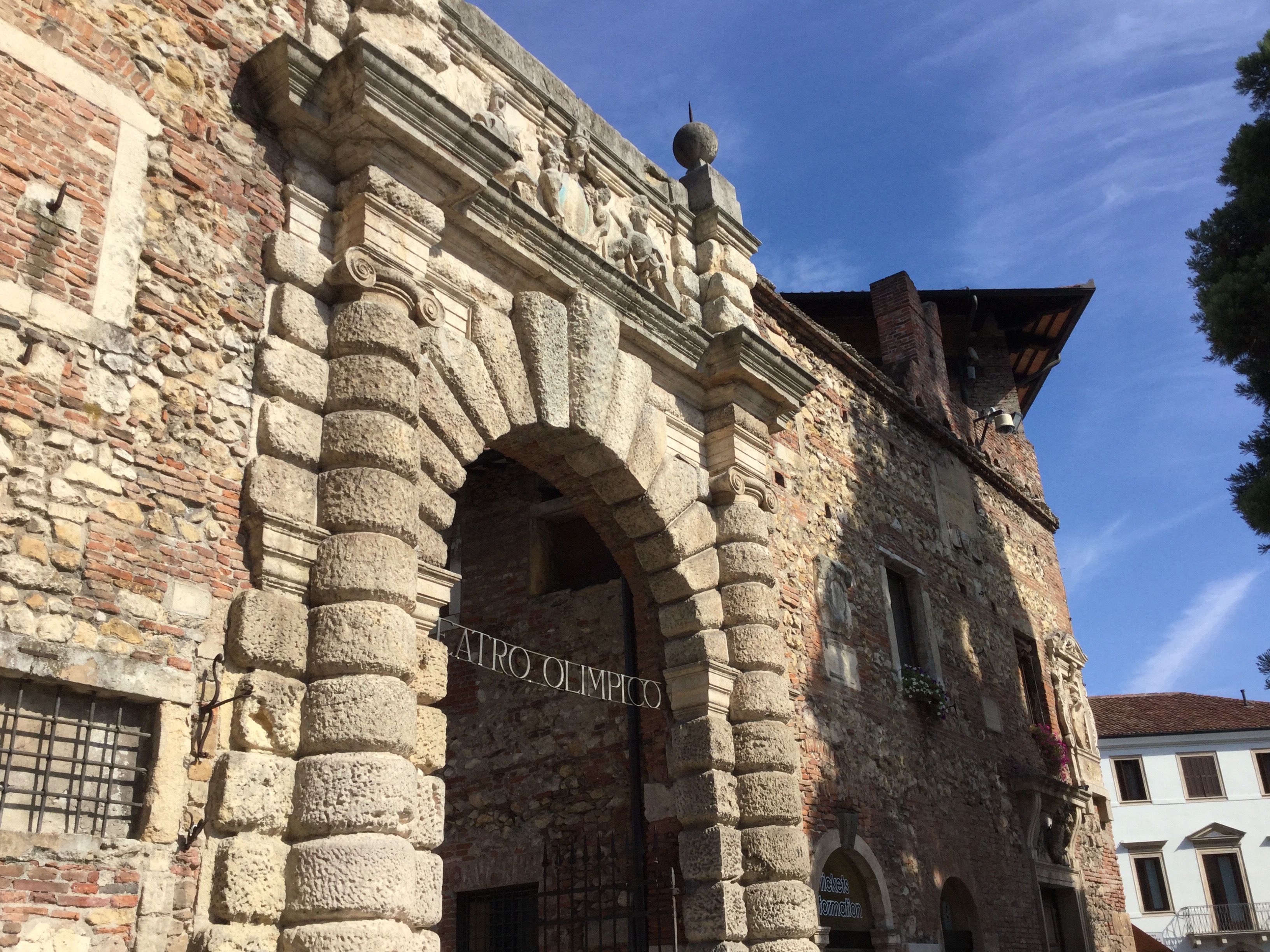 Transitions…a gate way to the classical past.

Scamozzi also designed the stage which is truly stunning. Using trompe l’oeil, a painting technic that means to fool the eye, he recreated a street scene that represented Thebes for the play  Oedipus the King.  Built from wood and plaster that look like marble, it was never removed. It seems to be blocks long but in reality is only 45 feet down the center and 36 feet on the sides. At the 1585 premier there were 3000 people packed inside and no bathrooms. Today, audiences are limited to 400 and bathrooms have been added for tourists and theatre goers. Adequate facilities are still a small miracle in Italy but I could and may still write a blogpost about that! 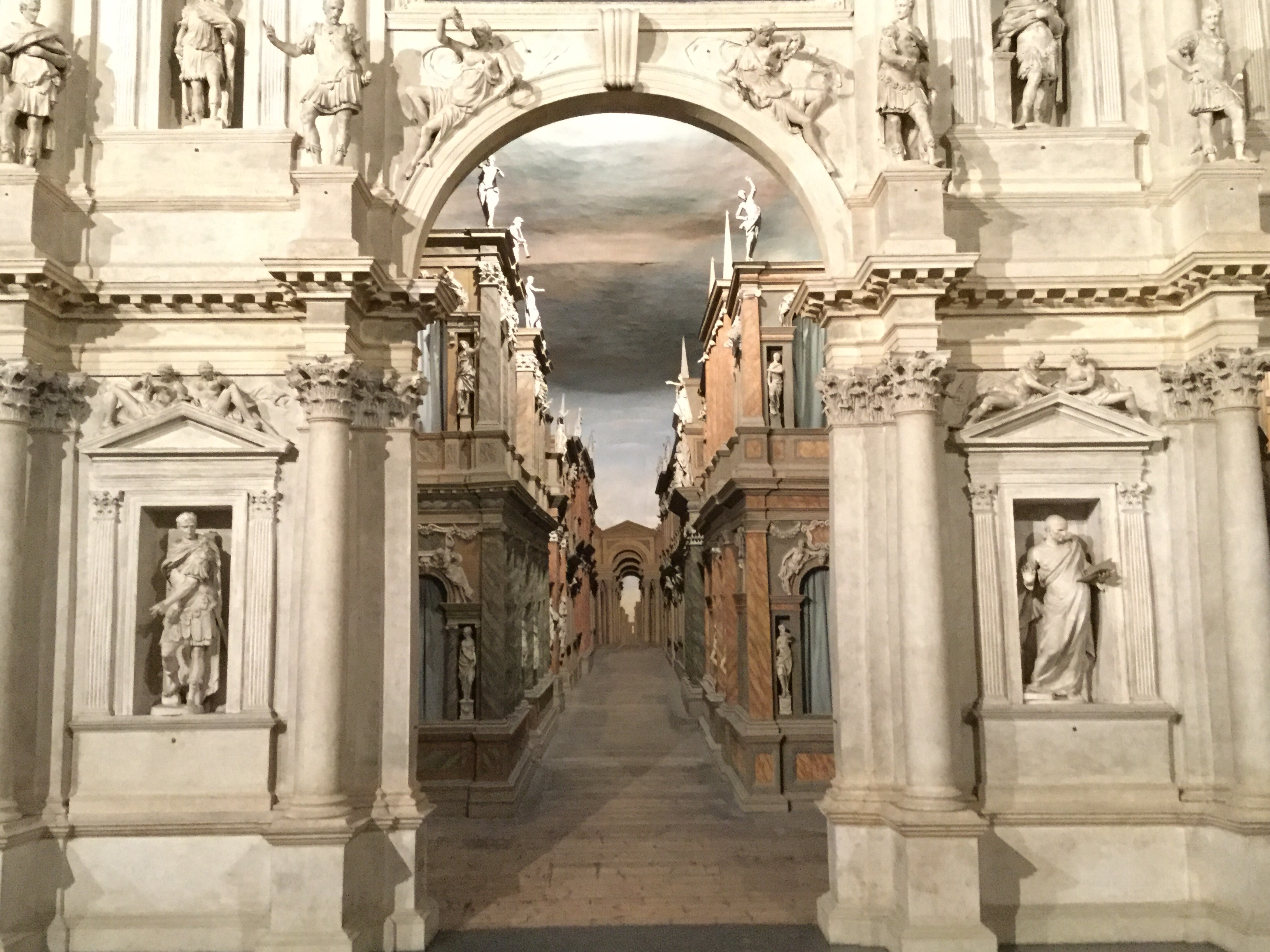 My eye has been fooled…this is only 45 feet long!

After the theatre it was time for lunch. Even when I am by myself I rarely skip a meal and today I had time for more than a sandwich. I found a modern looking restaurant, Julien, not far from the theatre and sat down ar one of the tables outside. While it wasn’t one of the greatest meals of my life, I enjoyed my lunch. A plate of sautéed calamari on a bed of crema di zucca (pumpkin soup) with  crispy pancetta croutons and a glass of local white wine.

A day of indulgences deserves dessert and I love chocolate! 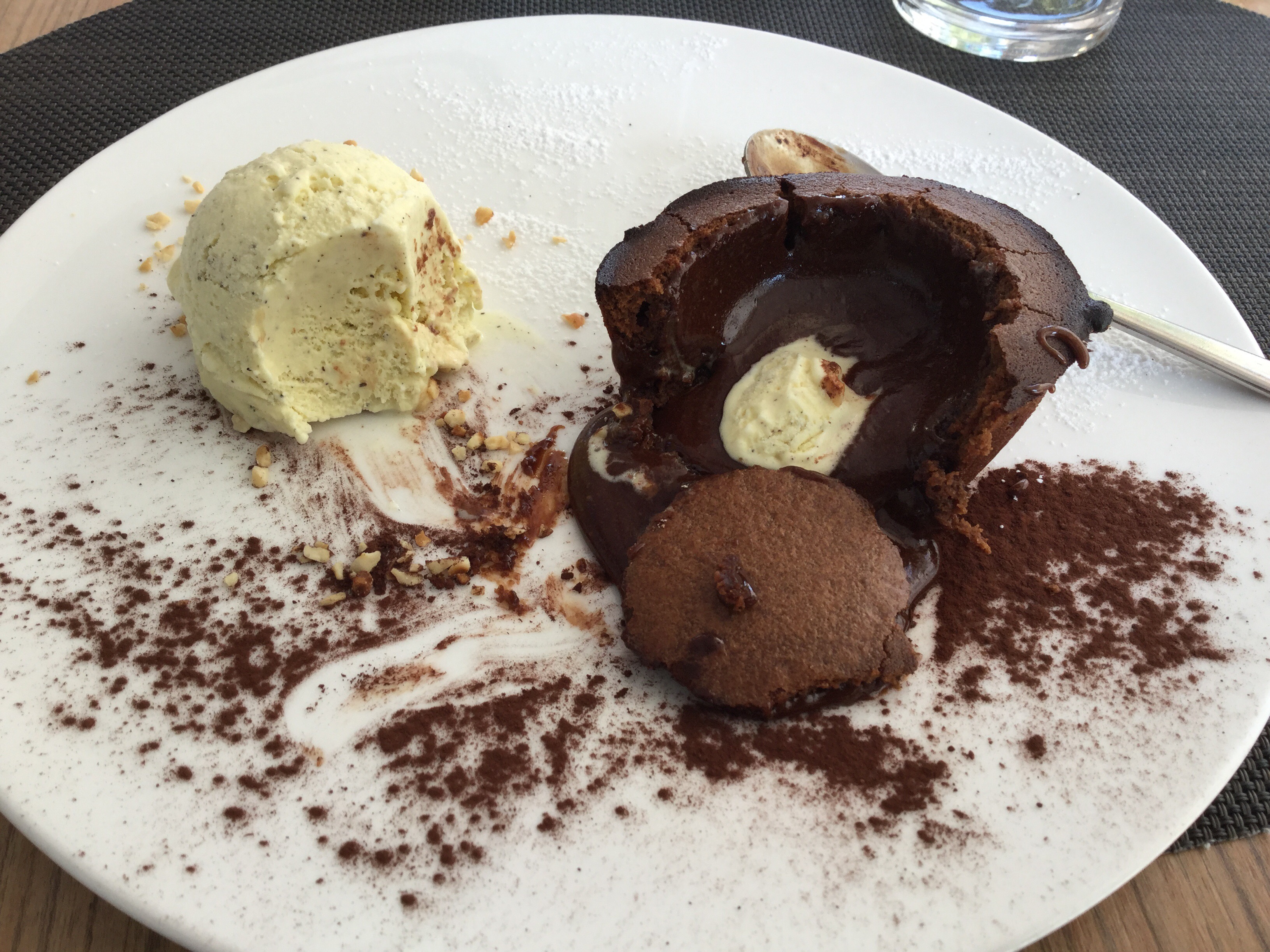 After what I think was a well earned break, it was time for me to get to work but I had to get back to Padova first and that required a stroll through town. Smack dab in the center is the Basilica Palladiana.  Named this by the architect himself it was in reference to ancient Roman Basilicas that usually housed courts and were used for public assemblies.  In architectural terms a basilica is a building with a central nave and in ancient Rome usually had two colonnades that separated the nave from aisles on either side. The central nave was usually higher to allow light to enter and it also had a rounded apse where a magistrate would sit on a slightly raised dais.  Palladio’s basilica was his first major public work. Projected in 1546, it was begun in 1549 and wasn’t finished until 1614, 34 years after his death. 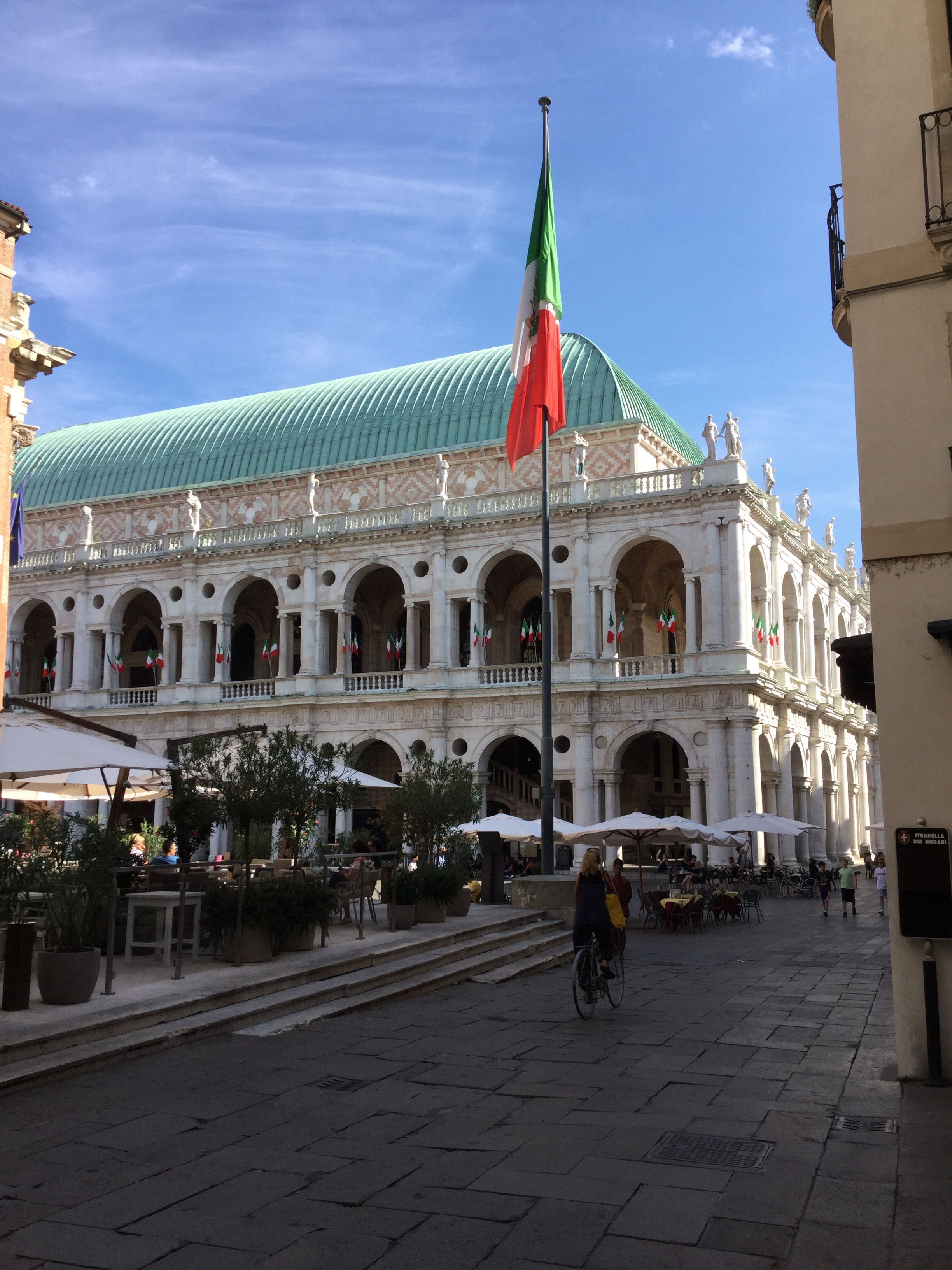 Glancing at my watch I realized it really was time for me to move on. I killed the better part of a day and had some real work to do even if I could consider a day like this R&D.  Off to the train, Buon Viaggio!

One thought on “Un Giorno di Riposo…A Day Off”